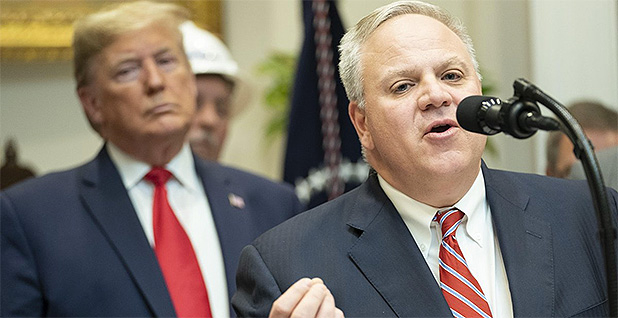 "I believe the State’s recent actions and litigation are ill-founded and potentially unlawful," Bernhardt wrote to Sen. Dianne Feinstein and other California Democratic lawmakers.

The letter underscores that tensions between California and the Trump administration are nearing a boiling point.

Primarily at issue is management of the Sacramento-San Joaquin River Delta east of San Francisco, the state’s water hub; water from the delta is shipped south to farms and cities.

The delta is also home to several threatened species. At a February campaign-like rally in Bakersfield, Calif., Trump finalized biological opinions for the delta that would allow more water to be exported to farmers.

California and environmental groups have sought to block those opinions from going into effect in court. The state has also issued its own permit under California’s endangered species law that is more restrictive, though environmentalists say it doesn’t go far enough.

Water from the delta is shipped south via two projects: the federal Central Valley Project and State Water Project. For decades, state and federal water managers have coordinated those operations.

But that relationship appears to be fraying at a critical juncture as California could be heading for more drought conditions (Greenwire, April 27).

They sent letters to Bernhardt and Newsom trying to get the two sides to work out their differences (Greenwire, April 16).

Other lawmakers, however, have backed the Newsom administration’s aggressive steps.

"We applaud the State’s recent court filings to protect the environment and hold the Trump administration accountable," they wrote.

In his letter, Bernhardt also highlighted that the Metropolitan Water District of Southern California — the largest water provider in the country — has filed a lawsuit against the state’s endangered species permit for the delta.

And he expressed concern about the deteriorating relationship.

As the state’s litigation unfolds, he said, "I anticipate that the State and the Department will face significant administrative and operational challenges regarding the intertwined operations of these two water projects."