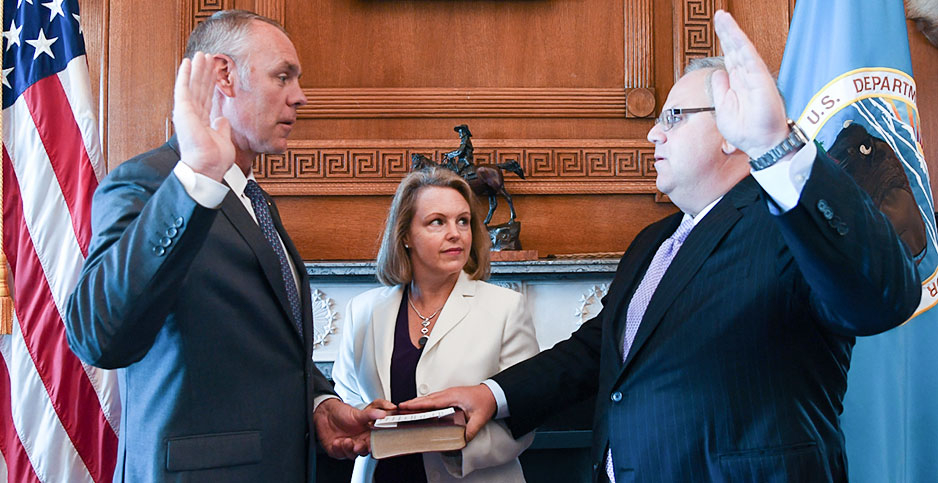 Interior Secretary David Bernhardt’s newly expressed doubts about one of his predecessor’s department reorganization ideas puts him, perhaps briefly, on the same page as one of his most persistent critics.

It also appears to be one of the first policy differences separating Bernhardt from his one-time boss, former Interior Secretary Ryan Zinke.

In a congressional appearance yesterday, Bernhardt largely promoted the reorganization plan initiated by Zinke, but he also admitted concerns about the former Navy SEAL’s notion of establishing a "unified regional commander," similar to the military’s.

"I have serious questions about the utility of that," Bernhardt said, adding that "that’s part of his budget we can spend some time thinking about."

Nearly one year ago, a prominent environmentalist raised her own concerns about Zinke’s unified regional commander idea.

Bernhardt spoke about the planned Interior Department reorganization in his inaugural appearance as secretary yesterday before the House Interior and Environment Appropriations Subcommittee.

Though no lawmaker immediately followed up during the two-hour public hearing, Bernhardt’s invitation to reconsider the unified regional commander idea will provide grist for debate as Congress writes an Interior funding bill that could include reorganization dollars (E&E Daily, May 8).

As currently envisioned, Interior’s reorganization plan calls for 12 consolidated regions in which different bureaus could communicate more directly and share certain functions like procurement and IT support.

"Fewer regions make it easier to do business with Interior," the department’s fiscal 2020 budget justification said, adding that it will "improve and streamline business operations using shared services and best practices."

But after meeting with Zinke last May, Jamie Rappaport Clark, the president and CEO of Defenders of Wildlife, warned in a four-page letter that the reorganization plan would cost too much, "disrupt the essential functions" of the agency’s bureaus and never win congressional support.

Rappaport Clark noted, for instance, that the Fish and Wildlife Service, National Park Service, and Bureau of Land Management all have "distinct statutory missions, with management directed and constrained by the specific laws that govern each system" (E&E News PM, May 29, 2018).

"No other office or administrator of any other bureau can direct decisions reserved by law to these agencies," she wrote. "The concept of a unified regional commander, drawn by rotation from the bureaus within the region, is thus both inappropriate and fundamentally unlawful."

Zinke drew upon his experiences with unified combatant commands during his 23-year Navy career in conceiving the idea of Interior adopting a similar practice.

The military’s unified combatant commands are led by four-star generals or admirals with authority over all branches in their area; the U.S. Central Command that’s responsible for 20 Middle East countries, for instance, is currently led by a Marine who has an Air Force deputy.

Yesterday, Bernhardt described Zinke’s notion of a unified Interior regional commander as being "kind of a regional superdirector, focused on cross-jurisdictional issues but also [with] a bureaucracy of its own."

Interior’s reorganization web page currently refers to a "central regional figure … [who] will help facilitate opportunities for bureaus to work more effectively together."

Currently, the 12 regions have one or two "regional facilitators."