Bernhardt ‘cancer on the planet’ threat turned over to FBI 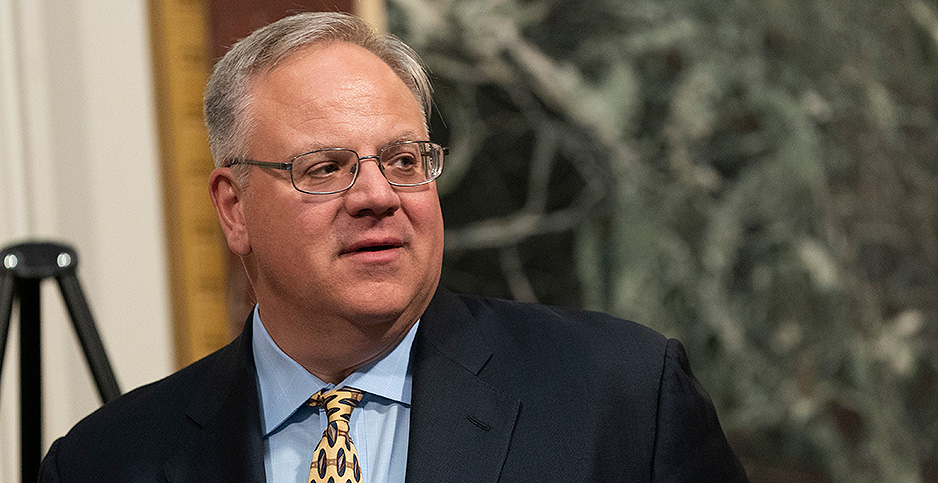 The telephone caller wished the very worst for David Bernhardt.

It was March 6, 2019, and Bernhardt was acting Interior secretary following the departure of his predecessor, Ryan Zinke, and prior to his own Senate confirmation as the department’s leader. While still in office, Zinke had been targeted by harassing telephone messages.

Now it was Bernhardt’s turn.

Not long after noon on that early March day, a female Interior staffer traveling in the Denver area received a call from a blocked number. The caller, according to a U.S. Park Police report, "left profane and disparaging comments about her" and Bernhardt.

"Most notably, the caller stated he hoped A/S Bernhardt would have a heart attack and was a ‘cancer on the planet’ and that ‘history would judge him,’" the Park Police recounted in the incident record obtained by E&E News through the Freedom of Information Act.

The Zinke and Bernhardt calls, while disturbing, are not unique. Public officials, like celebrities, sporadically receive unwanted attention from unsound minds.

In both the Bernhardt and Zinke cases, the Park Police, which provides security details for the Interior secretary, turned matters over to the FBI for further investigation.

The FBI’s national press office said it didn’t have any comment when contacted by E&E News for this story.

For the federal officials on the receiving end of the harassment, the sense of alarm lingered.

"The anger, intolerance and shameful actions directed against me and my family were without precedent," Zinke told E&E News in an email. "Myself, my wife and my children were all subject to death threats and harassment to include the surveillance of our home."

Zinke added that "the threats were taken seriously and were reported to law enforcement."

At the time he announced his resignation in December 2018, amid questions about his leadership, the former Navy SEAL officer cited threats against his family as well as what was characterized as the "anger and the lies" surrounding his tenure.

E&E News also filed a FOIA request with the Park Police in 2018 for any threat investigations related to Zinke. The agency said in May the following year that it found no responsive records.

Federal law prescribes a prison term of up to six years for anyone who "threatens to assault, kidnap or murder a United States official … with intent to impede, intimidate or interfere with such official, judge or law enforcement officer while engaged in the performance of official duties, or with intent to retaliate against such official."

Other Interior leaders have been targeted, as have the heads of other Cabinet-level agencies.

FBI records previously obtained by E&E News under FOIA showed a threat against then-President Carter and his Interior secretary, Cecil Andrus, when they were to float down Idaho’s Salmon River in August 1978. The Twin Falls, Idaho, sheriff’s office said it received a call from an unknown person that the president and Cabinet secretary were in danger from a "revolutionary group."

The caller "stated that 2 snipers armed with .270 caliber rifles with scopes would be at two seperate [sic] bends above river to fire at president and Andrus," according to an FBI memo.

"Stated hit men were to get $100,000.00 each and that revolutionary group was after the president because of the Panama Canal Treaty," the memo said.

The caller hung up after saying if people he was with knew he was talking to law enforcement authorities, "he would be dead."

The FBI was unable to identify any individuals or groups based on the call, but the Secret Service later arrested an Idaho man who said he made the call and sent a threatening letter (Greenwire, April 2, 2018).

Former EPA Administrator Scott Pruitt, too, faced several threats during his tenure at the agency. Many of those came under investigation by EPA’s inspector general, who often alerted the FBI, records show.

The gravity of those threats against Pruitt, however, were questioned.

One investigative report details FBI agents and local police scrambling to respond to a social media post threatening to murder Pruitt. The individual responsible said they were drinking while watching "The Rachel Maddow Show" when they made the "flippant comment" and didn’t intend to threaten anyone.

Another report has EPA’s IG office contacting the Secret Service and the FBI Joint Terrorism Task Force in Boston after a Museum of Fine Arts postcard with obscene language was sent to Pruitt. Since the postcard lacked a clear threat and the investigation couldn’t find the person responsible, the case was closed.

Unlike his predecessors at EPA, Pruitt was under watch from a 24/7 personal security detail. The IG later issued a report that found increased security spending for Pruitt wasn’t justified, which EPA has disputed.

The Government Accountability Office recounted in a 2000 report the only known instance where a Cabinet secretary was injured. It occurred when one of President Lincoln’s assassination conspirators attacked then-Secretary of State William Seward in 1865.