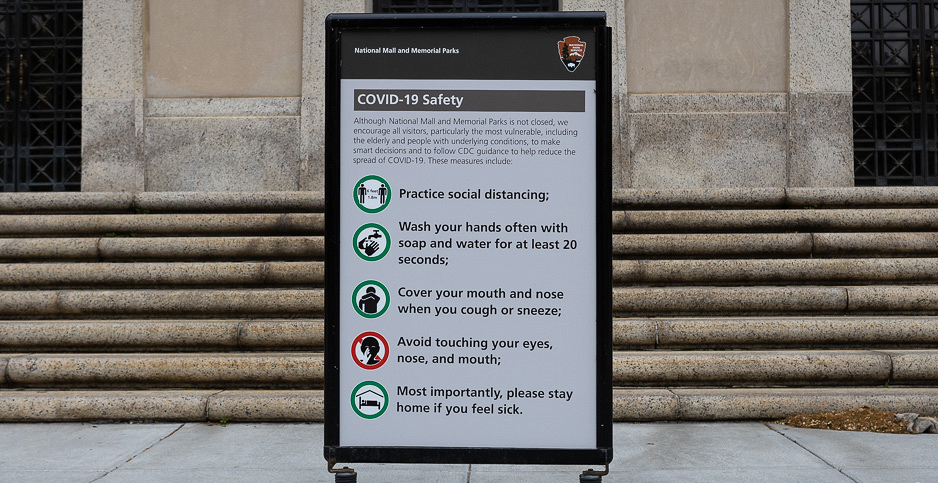 Coronavirus safety guidelines are posted outside Interior Department headquarters in Washington. The department is planning a phased-in approach to reopening its offices. Francis Chung/E&E News

Interior Secretary David Bernhardt told employees yesterday that the department is implementing a phased-in plan to return employees to offices nationwide that will vary from state to state, depending on the severity of the COVID-19 health crisis in each region.

And a senior Interior Department official told agency employees that mandatory telework for most of its 70,000 employees could end by the end of the month.

Bernhardt laid out his direction "to return to regular duty stations" in a departmentwide memorandum yesterday afternoon.

Scott Cameron, acting Interior assistant secretary for policy, management and budget, followed with a more detailed memo to agency employees that "modifies some terms and extends other terms" regarding "telework and leave options" during the next three weeks.

"National and regional leadership … may continue flexible telework and leave options for their employees through the pay period ending May 23, 2020," consistent with President Trump’s three-phase plan to reopen America, Cameron wrote.

Bernhardt and Cameron both noted that efforts to return to work will be consistent with last week’s guidance memo from the Office of Management and Budget that directed all federal agencies to develop plans to reopen in phases (E&E News PM, April 20).

Bernhardt wrote that the department’s return-to-work effort will be guided by these OMB-requested plans that the Bureau of Land Management, National Park Service, Fish and Wildlife Service, and other bureaus are "finalizing and will soon begin executing."

"Within these guidelines, and in following guidance from the Office of Personnel Management, we are transitioning our operations to return to regular duty stations in phases," Bernhardt wrote.

He added that as Interior bureaus phase back to work, the "health and well-being" of employees will be "critical to me."

Interior did not respond to a request to comment on this story before publication.

The latest direction from Bernhardt comes as many areas are still struggling to recover from the devastating impacts of the pandemic. Some health experts have questioned if reopening the country now could spark a second wave of coronavirus outbreaks that overwhelms the nation’s health care system.

But Trump has pushed to reopen the country and restart an economy that’s tanking, as tens of millions of people are now jobless as a result of the nation shutting down during the health crisis that has killed more than 63,000 Americans.

"We each confront challenges in our own way. Regarding any particular matter I must address, I look at the facts and the data as much as possible," Bernhardt wrote.

"I have placed an emphasis on learning from our public health experts all that I can about COVID-19 to ensure that my decisions are grounded in a real-time understanding of the virus and the expertise of our commissioned public health officers," he continued. "This will continue as we proceed forward."

Each step in the process, he added, "will be by the pace of Governors and State and local public health officials."

Cameron doubled down on that point, noting that while telework is preferred in the hardest-hit areas, it "will no longer be mandatory for all telework-ready Interior employees once their work locality" passes certain COVID-19 recovery milestones — presumably two weeks of declining rates of confirmed virus infections.

Bernhardt in late March directed most of Interior’s 70,000 employees to telework, exempting those who perform "mission critical" duties, such as law enforcement officers, firefighters and oil platform inspectors (Greenwire, March 23).

"Maximum telework or weather and safety leave remains appropriate for some employees, with further consideration given to those employees who self-identify as being at high risk based on criteria as determined by the Centers for Disease Control and Prevention," Cameron wrote.

Cameron’s memo is similar to one sent this week to EPA employees by Donna Vizian, head of the agency’s Office of Mission Support (Greenwire, April 30).

The plan to reopen not just Interior but also other federal agencies has many critics, including in Congress.

Senate Democrats this week sent a letter to the acting director of the Office of Personnel Management demanding more information about the administration’s plans to return federal staffers to offices (E&E News PM, April 28).

In Colorado, where Gov. Jared Polis (D) has lifted a stay-at-home order with new guidance that allows businesses to bring back up to 50% of their employees starting Monday, Interior has moved quickly, sources said.

Interior employees are expected to begin returning in phases to the Denver Federal Center — the largest concentration of federal buildings and agencies outside Washington — on Monday.

The massive center in Lakewood, Colo., just outside Denver, houses more than 4,000 Interior employees and is managed by the General Services Administration.

One current Interior official anonymously expressed concerns to E&E News last week about the safety of employees returning so quickly to the federal center without assurances that the buildings have been disinfected (Greenwire, April 21).

"No one is happy about that," the official said.