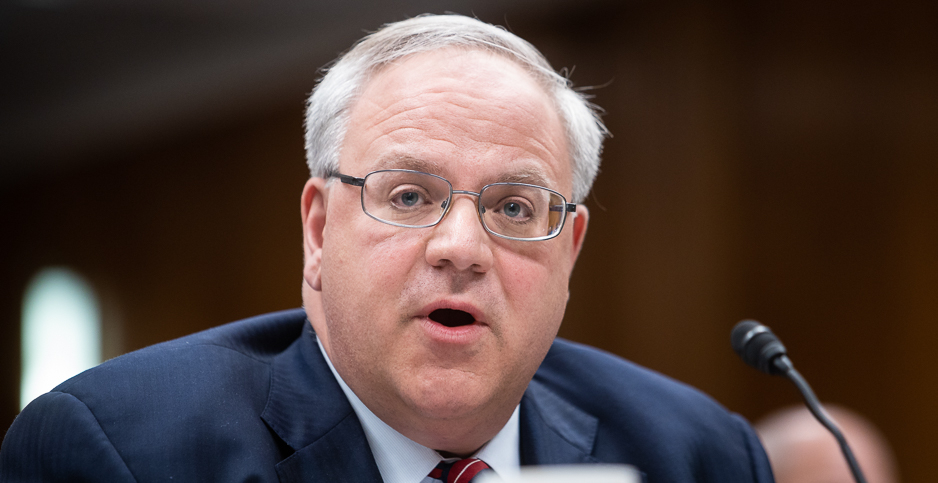 On a local Wisconsin radio show, Interior Secretary David Bernhardt rebuked protesters who want to do away with Confederate statues. Francis Chung/E&E News

Stepping up his defense of national monuments, Interior Secretary David Bernhardt warned that prison sentences await protesters who vandalize them and that federal authorities are monitoring social media feeds to track them down.

"We are not messing around: We’re not accepting this, and we are going to put these guys in jail," Bernhardt said in an interview on a conservative talk radio station in Wisconsin last week.

"I mean, the bad-doers are great," Bernhardt told Vicki McKenna, who hosts a talk show on 1130 WISN. "They’re really great at posting their actions on Facebook or utilizing their camera. And that’s great in one way, but it’s not great for them when we come to get ’em. And we are at a point now where we’re rounding these people up."

After a correspondent with Yahoo News tweeted that Bernhardt had "inadvertently" confirmed that the Trump administration was monitoring social media in search of "anti-racism protesters," the Interior Department’s press office yesterday defended the secretary’s remarks.

"Really? If a criminal commits a federal crime and posts photos about it on their social media, it will be used to hold them accountable," the department’s press secretary said on Twitter. "Play stupid games, win stupid prizes."

The tough talk follows the lead of Bernhardt’s boss: President Trump has made the preservation of Confederate and other controversial monuments a central plank in his bid to win a second term (Greenwire, June 24).

And few states are more important for Trump than the battleground state of Wisconsin, which the president carried in 2016 by less than 1 percentage point, or fewer than 23,000 votes. No Republican candidate had won the state’s electoral votes since President Reagan’s landslide win over former Democratic Vice President Walter Mondale in 1984.

In his interview with the radio station in southeastern Wisconsin, Bernhardt denounced the protesters for trying to erase U.S. history, calling their actions an "assault on history, and on us."

"This is about destroying everything that America holds dear," he said.

Trump has called for automatic 10-year prison sentence for anyone who damages a monument, and Bernhardt reinforced that message.

"What people don’t seem to realize is that there are very severe punishments for destroying federal property and destroying these monuments, both criminally and civilly," he said. "It’s not like a jaywalking ticket."

Bernhardt also provided new details on Trump’s proposed "National Garden of American Heroes," described by the president last month as "a vast outdoor park that will feature the statues of the greatest Americans who have ever lived."

While Trump announced the first 31 people he wants honored in the garden, Bernhardt said the list could ultimately grow to 1,000 and that a plan to be announced by Sept. 1 will also include a "traveling memorial that will go around with temporary displays."

Trump wants the garden to open by July 4, 2026, when Americans will celebrate the 250th anniversary of U.S. independence. Bernhardt said the president wants it built to honor "folks from all areas of Americana."

"The president loves our country, loves our freedom and our liberty, and believes in our exceptionalism," he said.

Top Democrats on the House Natural Resources Committee yesterday questioned the legality of Trump’s executive order creating the garden, calling it a political project and an attempt by the president to "appeal to white grievance politics" (E&E News PM, Aug. 5).

"Judging by your statements, you seek to build a monument to people you consider unblemished heroes, nearly all of whom are white and male," Reps. Raúl Grijalva of Arizona, the panel’s chairman, and Deb Haaland of New Mexico said in a letter to the president.