Bernhardt goes on the ethics offensive 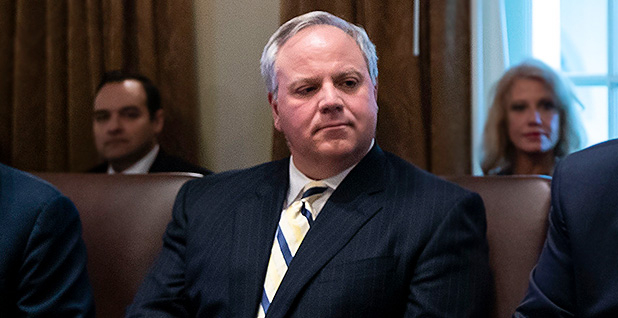 In a pointed and acutely timed missive to Interior’s 70,000 employees, Bernhardt declared the department’s "ethics infrastructure" had been "badly neglected for far too long." He pinned blame on the Obama administration.

"Sadly, our organization’s ethics challenges were part of a mess that we inherited," Bernhardt wrote in a departmentwide email on Friday. "The last decade of the Inspector General’s reports read like an avalanche of ethical misconduct. No Bureau is exempt from criticism."

Bernhardt’s "ethical culture" message includes a commitment to boost the number of Interior’s career ethics officers, and it comes at a doubly delicate time for him and the department he leads.

Besides turning the page explicitly from the Obama era and implicitly from Zinke’s time, Bernhardt’s memo also shines a spotlight on his own leadership and willingness to play offense while he’s a top contender for nomination as Zinke’s successor.

"I haven’t heard anything from anyone about timing or new names. It’s just that we’ve been continuing to do business as usual," Murkowski told reporters Thursday.

Much of Bernhardt’s week was devoted to all-staff meetings with various Interior agencies.

As an example of what he termed a "cavalier approach to ethics compliance," Bernhardt cited former NPS Director Jonathan Jarvis. A career NPS employee who’s now retired, Jarvis has become a leading critic of the Trump administration’s Interior policies.

In a recent widely circulated op-ed, for instance, Jarvis declared that in the Trump administration, Interior’s "doors were soon darkened by profiteers, big game hunters, oil executives, and climate deniers."

Appearing like a rebuttal, Bernhardt recounted in his ethics memo that Jarvis "essentially stated after being confronted with his own ethical violations and delivering an ‘untruth’ to the Secretary of the Interior, that he would have probably done the same thing again."

Twisting the knife, Bernhardt cited a link to the three-year-old IG report on Jarvis’ actions. Because the link was missing in the email sent Friday night, a corrected version was sent yesterday.

The 2016 IG report found that Jarvis had intentionally avoided seeking approval from Interior’s ethics office before writing the "Guidebook to American Values and Our National Parks." Jarvis subsequently apologized to employees for an "error in judgment" (Greenwire, June 2, 2016).