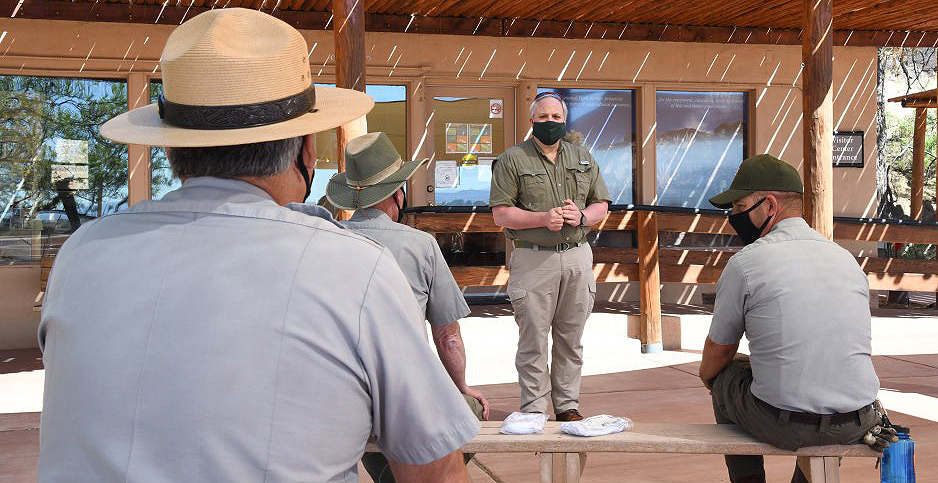 Interior Department employees will return to their workplaces in stages that "adapt" to the pace set in individual states, Interior Secretary David Bernhardt said.

In his latest pandemic-related memo to Interior’s approximately 70,000 employees, Bernhardt noted on Friday that states are now "implementing protocols to return to normal operations" that, in turn, will help shape the department’s next steps.

"In general alignment with guidance from governors, each bureau has finalized a plan that will utilize a phased approach as we return employees to the workplace and continue efforts to ensure that access and opportunities across our public lands are fully restored," Bernhardt wrote.

Bernhardt added that Interior will "expeditiously utilize new and existing hiring authorities that will allow Bureaus to hire the support staff needed to address COVID-19 response and recovery actions."

The Bureau of Land Management, for instance, appears to be moving quickly to reopen in Colorado, where Gov. Jared Polis (D) earlier this month relaxed a stay-at-home order to allow businesses to bring back up to 50% of their staffers to offices.

Interior employees with BLM and other bureaus have already begun returning in phases to the Denver Federal Center — the largest concentration of federal buildings and agencies outside Washington.

On March 22, Bernhardt directed any of Interior’s employees "not performing or supporting mission essential functions or performing mission critical functions" to telework. The order applied to every region, bureau and office, and all department employees (Greenwire, March 23).

More than 150 national park sites began closing that month with hopes of slowing the spread of the virus, while many activities were canceled or postponed at national wildlife refuges.

"So you’re getting those parks open yet?" President Trump asked Bernhardt at the White House on May 13 (Greenwire, May 14).

"Absolutely," Bernhardt replied, adding that the agency was working with state and local governments to guide decisionmaking.

The White House Office of Management and Budget noted in an April memo that "85% of the Federal workforce is outside the Washington, D.C., area, so agency heads must be cognizant of the phasing status for all states and regions where an agency operates."

Representatives with BLM did not respond to a request today for comment and information about its specific plans for returning to workspaces.

Several sources tracking BLM’s reopening process say the bureau appears to be sincere in following individual state guidance on reopening. Most employees in state offices are still being allowed to telework if they want, the sources said.

In the new memo, Bernhardt said "certain workplace flexibilities, including support for caregivers until schools resume normal operations," will continue.

"Other administrative actions, such as weather and safety leave, will sunset as employees are able to return to their duty stations, while recognizing the continued importance of protecting our vulnerable employees through extended telework and workplace flexibilities," Bernhardt wrote.

Interior has not disclosed how many employees have fallen sick or tested positive for the novel coronavirus that causes the potentially lethal COVID-19 disease.