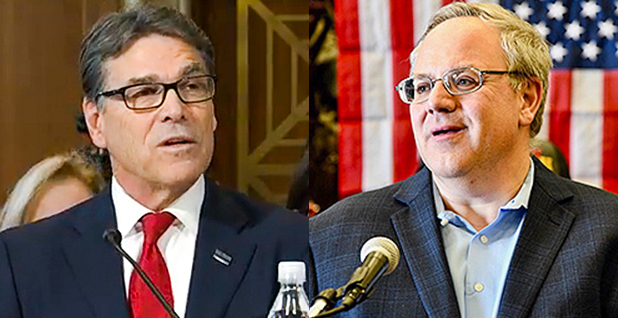 Interior Secretary David Bernhardt and Energy Secretary Rick Perry are due on Capitol Hill this week to defend their budget requests.

Their appearance will come as lawmakers search for a bicameral compromise on spending levels for fiscal 2020 and as communities pressure members to ink a deal on a disaster package.

Bernhardt is making his first House appearance since being sworn in last month. He will testify before the Appropriations Subcommittee on Interior and Environment.

The hearing occurs as Bernhardt seeks to make inroads with Democrats in private meetings after former Interior Secretary Ryan Zinke’s acrimonious relationship with them.

Bernhardt is sure to face questions about his agency’s stalled offshore drilling plan, an overdue department reorganization and a lengthy National Park Service maintenance backlog.

Democrats are also unlikely to let him go without addressing several ethics concerns that have come up over his past work as an energy lobbyist.

The hearing is a prelude to an expected markup of the fiscal 2020 Interior-EPA spending bill later this month.

While the Interior-EPA title is one of the most controversial of the year, appropriators are expecting a smoother ride for the Energy and Water Development legislation.

Perry will appear before the Energy and Commerce Subcommittee on Energy. While he may defend the administration’s proposed cuts, he may — like times prior — defer to whatever spending levels lawmakers come up with.

House appropriators will vote on the Labor-Health and Human Services-Education spending bill Wednesday that would boost dollars for a host of domestic agencies, among them the Mine Safety and Health Administration.

The bill’s committee report, due out this week, is expected to more specifically address how the panel would direct proposed increases for more research into the health impacts of climate change.

The Labor-HHS-Education bill will be the first spending bill to advance to the House floor this year.

At the Wednesday session, House appropriators will also approve 302(b) allocations. Those are the top-line spending levels for each of the 12 fiscal 2020 spending bills.

The widely awaited figures are expected to show a sharp break with the Trump administration over cuts for EPA and the Interior and Energy departments.

Two other House spending bills — the Legislative Branch and Military Construction-Veterans Affairs measures — have cleared subcommittee and could move to the full Appropriations panel later this week.

The Legislative Branch bill would revive Capitol Hill’s Office of Technology Assessment. The nonpartisan congressional policy shop did technical and scientific research for lawmakers, including on energy and environmental policies, but was eliminated by Republicans in the mid-1990s.

The Senate has yet to begin marking up its fiscal 2020 bills.

House Democrats will attempt to put more pressure on the Senate this week to pass a disaster aid package that has been stalled for weeks.

House Democrats are due to vote on a $17 billion bill, H.R. 2157, that includes about $3 billion in new funding for damage from floods and wind in the Midwest.

It’s one of several disaster aid bills the House has moved in recent weeks while the Senate has been unable to resolve a dispute over aid to Puerto Rico. The inclusion of the Midwestern aid is meant to help draw bipartisan Senate support.

The Senate’s top appropriators last week were trading counteroffers in an effort to end the monthslong impasse.

Appropriations Chairman Richard Shelby (R-Ala.) said funding for Puerto Rico remained the sticking point, with the president digging in against more funds for the island territory.

"We’re trying," he said of him and ranking member Patrick Leahy (D-Vt.). "We’re not the obstacle."

In a nod to the White House’s complaints about Puerto Rico’s fiscal management, the measure includes limits on accessing the new funds until past emergency funds have been largely spent.

Leahy has signaled openness to the latest GOP plan, Shelby said. "We got to see if they agree to this language," he told reporters Friday. "If they can, we’re on the right road."

Shelby said staff would work over the weekend to see if they can strike a deal that could be brought to the floor this week.

"Timing is everything right now," he said, noting growing impatience in many regions of the country.

Schedule: The House Appropriations subcommittee hearing on the Interior budget is Tuesday, May 7, at 3 p.m. in 2362-A Rayburn.

Schedule: The House Science, Space and Technology Committee hearing on the National Science Foundation budget is Wednesday, May 8, at 10 a.m. in 2318 Rayburn.

Schedule: The House Appropriations Committee markup on the Labor-HHS-Education bill is Wednesday, May 8, at 10:30 a.m. in 2359 Rayburn.

Schedule: The Senate Appropriations Committee hearing on the Defense budget is Wednesday, May 8, at 10 a.m. in 192 Dirksen.

Schedule: The House Energy and Commerce subcommittee hearing on the Energy budget is Thursday, May 9, at 10:15 a.m. in 2123 Rayburn.