Bernhardt: Reorganization plans to heat up this summer 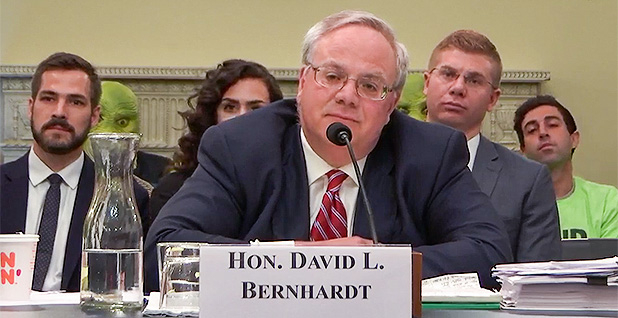 This summer could be a crucial one for Western communities hoping to snag parts of the Interior Department, Secretary David Bernhardt indicated today.

In his inaugural appearance as secretary before the House Natural Resources Committee this morning, Bernhardt said the department is pressing ahead on a reorganization effort initiated by his predecessor.

"I expect by this summer we’ll be sending up a reprogramming request regarding a potential move of some of the folks in the Bureau of Land Management and potentially the U.S. Geological Survey," Bernhardt said.

"I’m not sold on that part," Bernhardt said, "so we’re tweaking that."

Interior’s reorganization plan calls for 12 consolidated regions in which different bureaus could communicate more directly and share certain functions like procurement and IT support.

A House bill unveiled yesterday would provide Interior a total of $13.8 billion in fiscal 2020, much more than the $12.6 billion the Trump administration recommended. The package largely rejected the administration’s proposed cuts to department agencies and programs, like the Land and Water Conservation Fund, and omitted funding for Interior’s planned reorganization.

"We will proceed with the department’s reorganization, including efforts to relocate some operations out West, closer to where assets, acres and customers are located," Bernhardt said (Greenwire, May 8).

The morning hearing gave lawmakers a chance to push Bernhardt on ethics questions, complain about an alleged lack of consultation with tribes, advocate for more funding and, at times, champion strictly local or regional causes.

A Colorado native, Bernhardt acknowledged that "some of those communities are logical," while noting that other Western members may "have slightly different views."

A civil tone, with sharp questions

The hearing’s tone stayed civil, albeit with an occasionally sharpened edge, with the committee chair, Rep. Raúl Grijalva (D-Ariz.), noting that he and Bernhardt had an amicable and "frank" private meeting prior to the public hearing (E&E Daily, May 7).

"I appreciated the conversation; it was necessary," Grijalva said, adding that "our differences are rooted in a very profound concern about the direction of the Interior Department."

The apparent differences, Grijalva noted, include the Democratic-controlled House’s demands for executive branch information and the Trump administration’s seeming resistance to oversight.

"We have legal justification for those requests," Grijalva said, adding that, across the administration, "this stonewalling will lead to a constitutional collision."

"I respect the role of Congress to provide oversight, and the department needs to be responsive," Bernhardt replied, noting that Interior has provided "over 66,000 pages of documentation" to Capitol Hill.

Democrats countered that a simple page count is a misleading measure of responsiveness because of myriad redactions, duplications and distractions.

Shadowed by several activists wearing green "Fund LWCF" T-shirts, Bernhardt said Interior would spend the Land and Water Conservation Fund dollars if Congress appropriates them. He did not offer a full-throated defense or explanation for the administration’s budget proposal to all but eliminate the funding, which reached $435 million this year (E&E Daily, March 12).

Bernhardt reported that Interior has hired 42 "career, professional ethics advisers" since the start of the Trump administration, and he has ordered the consolidation of diffuse ethics programs into "one comprehensive departmental program" that he characterized as "better functioning and more robust."

Nonetheless, Rep. Jared Huffman (D-Calif.) pressed Bernhardt hard on his past representation of California’s Westlands Water District, which included advocating for water-delivery provisions in the 2016 Water Infrastructure Improvements for the Nation Act.

Huffman added that questions linger about what’s on, or omitted from, Bernhardt’s calendars and pointedly asked whether the former lobbyist was "doing the bidding" of former clients.

"My actions are completely consistent with [Office of Government Ethics] guidance and the guidance of my own ethics advisers," Bernhardt said, adding that "my former clients aren’t meeting with me."