Bernhardt: Trump tried to boost offshore wind, not kill it 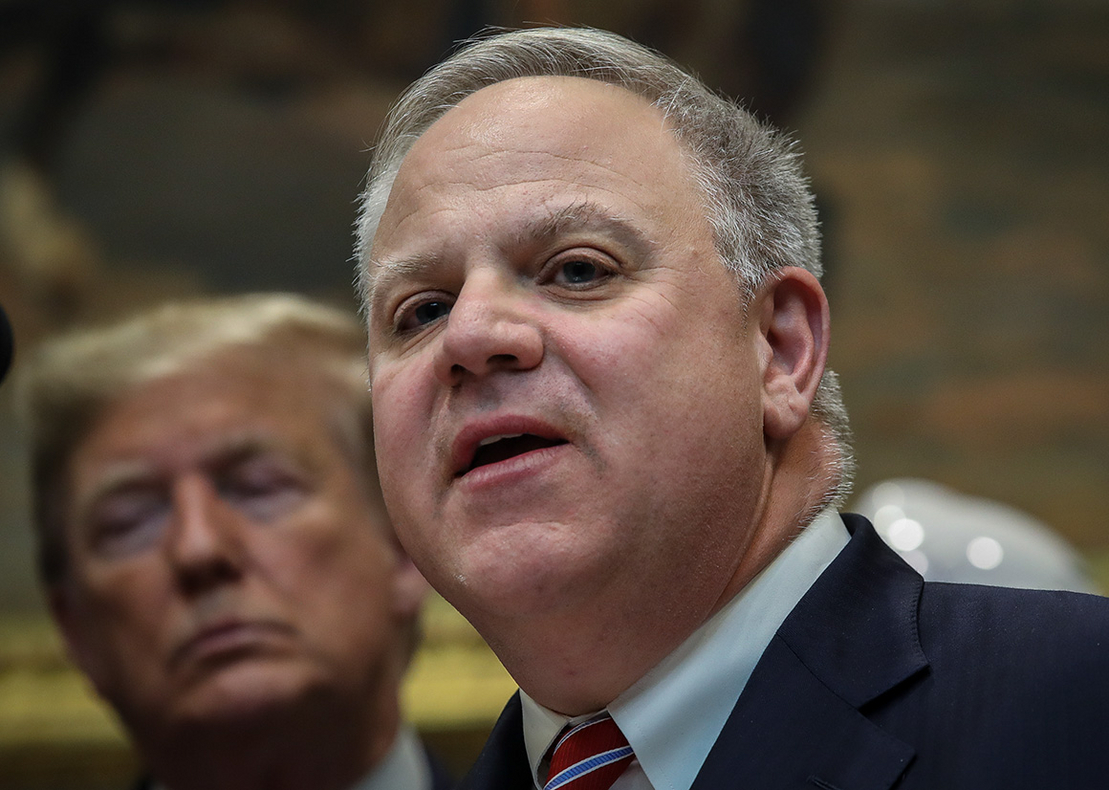 Former Interior Secretary David Bernhardt defended the Trump administration’s lengthy review of America’s first offshore wind farm in an interview yesterday, saying the additional environmental analysis he ordered was intended to strengthen the project against legal challenges rather than kill it.

The Trump administration had initially planned to complete a review of Vineyard Wind in the summer of 2019. But Bernhardt surprised the project’s developers, who proposed a $2.8 billion wind farm near Martha’s Vineyard, Mass., by expanding a government study of the project to consider other wind farms proposed along the East Coast.

The announcement cast a pall over the wind industry. It slowed planning work on other projects and raised questions about the viability of offshore wind in the United States. Many industry supporters suspected the move was a reflection of former President Trump’s disdain for wind power, which he regularly lambasted as an eyesore and a danger to birds. Trump erroneously claimed wind turbines could cause cancer.

But in a phone interview yesterday while vacationing at a North Carolina beach, Bernhardt said it was "fundamentally false" that the administration was playing politics with Vineyard Wind. Instead, he said his call for more analysis was driven by the growing number of wind projects proposed along the East Coast and by divisions among federal agencies over Vineyard Wind’s potential impact on commercial fishing and marine navigation.

“You can’t proceed with federal agencies warring with each other,” he said. “I was like, ‘Look, we don’t have our ducks in a row.’”

He added, “The last thing we wanted to do is put out a finalized program that wasn’t legally sustainable."

Bernhardt’s comments came hours after the Bureau of Ocean Energy Management released more than 500 pages of documents in response to a Freedom of Information Act request by E&E News. The documents were related to the permitting process of Vineyard Wind.

They show that BOEM officials were nearing completion of the project’s environmental impact statement in the summer of 2019. It was the final step before approval.

Then Bernhardt got involved.

“BOEM briefed the DOI Executive review team on the Vineyard Wind Final EIS on Friday, June 28th (this briefing is required prior to publication of a Final EIS for all DOI agencies),” Brian Krevor, an environmental protection specialist at BOEM, wrote to other federal officials involved in the permit review on July 1, 2019.

“The Secretary of the Interior is now personally reviewing the Final EIS and associated materials," he added. "As a result, the Final EIS was not filed with the EPA on the 28th and will not be published on July 5th. I currently do not have a date for when the document will be published.”

Bernhardt said he had promised Massachusetts Gov. Charlie Baker, a Republican who has championed offshore wind, that he would personally read Vineyard Wind’s EIS. He said he was “extremely troubled” by what he read.

A growing number of states along the East Coast had signed contracts to buy electricity from offshore wind projects by the time Interior officials were finalizing the Vineyard Wind study. But the cumulative impact of those projects on other ocean users like the fishing industry was not considered in the study, Bernhardt said yesterday.

He was also concerned about issues raised by other agencies. NOAA Fisheries, a division of the Commerce Department that oversees federal fisheries, had informed BOEM it did not agree with the bureau’s impact analysis of Vineyard Wind. The U.S. Coast Guard had raised separate issues about the safety of marine vessels transiting the project’s towers.

“It was very important to me that we not have conflict between the agencies when you go out for the first project,” Bernhardt said. “People have to have faith the government is doing the job it is required to do and managing the varying interests we had. We couldn’t be shooting at each other.”

Trump critics saw the delay as an attempt to kill the project, but Bernhardt said he has a long-standing interest in offshore wind. In 2005, he helped draft the Energy Policy Act as Interior’s congressional liaison. The law gave Interior oversight of offshore wind permitting.

“I think where I depart from perhaps some is that because I was actually involved in the development of the legislation, it is my view that a high bar was set in the standards that the secretary must meet to move forward both in preventing waste but also in protecting other uses,” Bernhardt said.

“I think the legislation that was created was intended to be cautionary. It is important to make these projects work in areas and places where they don’t do harm to others," he said. "That was what Congress was trying to do, because it was developed in context of the Cape Wind situation.”

Cape Wind was a 130-turbine project proposed in Nantucket Sound. The federal government lacked regulations for permitting offshore wind projects when it was initially proposed. It was ultimately abandoned in 2017 after years of lawsuits from residents who worried about the sight of turbines and their impact on environmental and cultural resources.

Fearing a similar outcome, Vineyard Wind went back to the drawing board after Bernhardt’s unexpected announcement in 2019.

It revamped the layout of its project, agreeing to space its turbines 1 nautical mile apart in a grid. The move was intended to address concerns from fishermen and the Coast Guard about transiting between the turbines. Other offshore wind developers said they would follow the same pattern.

Vineyard Wind also increased the size of its turbines, from 9.5 megawatts to 12 megawatts, enabling it to reduce the number of towers from 84 to 62. The company’s initial plan called for 104 turbines. The project has a capacity of 800 MW, enough to power 400,000 homes.

When BOEM released a draft review of the cumulative impact of all proposed offshore wind projects in the summer of 2020, it found the industry would have an adverse effect on fishermen. But it also concluded that fishermen would be affected by climate change and that the burden of the turbine would be concentrated on different parts of the fishing fleet. Squid boats, it found, would be most impacted by Vineyard Wind. It also determined that the wind industry stood to create thousands of jobs.

BOEM subsequently missed a November deadline to finish its review. Instead, it would announce its final decision on Jan. 15, five days before Trump was scheduled to leave office. In response, Vineyard Wind announced in December that it was withdrawing its permit application, saying it needed to consider the impact of using larger turbines as part of the project.

It quickly refiled its application after Biden took office, concluding the larger turbines did not alter the project’s impact. BOEM approved a final EIS in March and stamped Vineyard Wind’s permit in May. The final decision said it expected the project would have a negligible to moderate impact on fishermen but that the impact could become major as a result of future offshore projects. A 2020 study by the Coast Guard concluded that the updated grid layout addressed many of the navigation concerns.

But the permitting snafu may yet plague the project.

A lawsuit filed this week challenging the project’s permit said BOEM erred when it decided to re-accept the application without considering the impact of the larger turbines.

Bernhardt, for his part, said Interior was committed to finishing its review under his watch, saying a tremendous amount of work was done to “ensure that when this program went forward it would be defensible and stand the test of time.”

“A tremendous amount of work on this project was happening up to the moment they chose to terminate,” he added.

Asked if the final EIS released by the Biden administration differed from the one being prepared by the Trump administration, Bernhardt said it was difficult to evaluate because his team never finished its review.

But, he added, “I would be very skeptical that it looks dramatically different.”