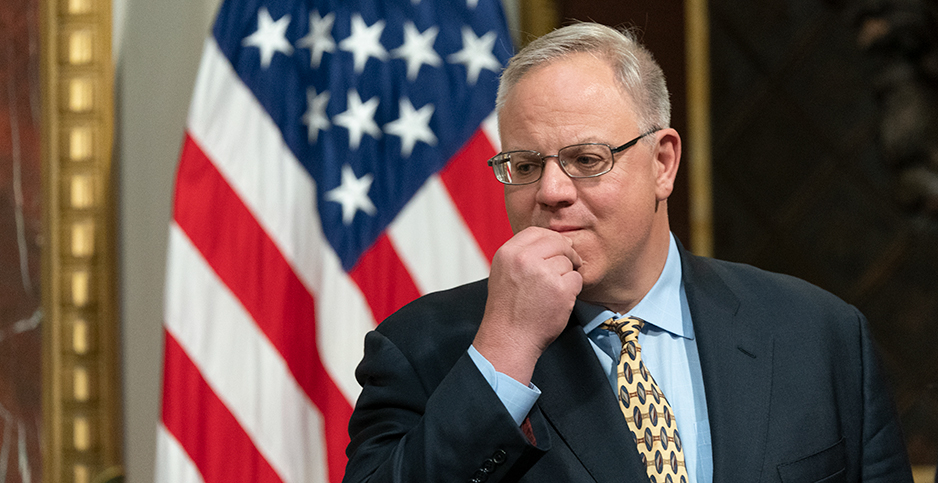 Interior Secretary David Bernhardt at an October meeting at the White House. Critics say Bernhardt’s former law firm has benefited from his tenure atop the Interior Department. Polaris/Newscom

Business has blossomed at Interior Secretary David Bernhardt’s former law and lobbying firm in the 31 months since he was first nominated to a Trump administration post, a new study by an environmental group shows.

Thirty-six clients have paid Denver-based firm Brownstein Hyatt Farber Schreck LLP a total of $11.96 million to lobby the Interior Department, the study found, including 19 clients that hired the company after Bernhardt’s initial nomination in April 2017.

"With a direct line to the political appointees who set America’s energy and wildlife policies, Brownstein Hyatt has cashed in," Center for Western Priorities Policy Director Jesse Prentice-Dunn said in a statement, adding that "it’s clear that under Secretary Bernhardt, corporations have a roadmap to get their projects approved — just hire a high-powered lobbyist, preferably at his old firm."

Prentice-Dunn, using public lobbying reports and other documents, determined that the nearly $12 million in revenue marked a 310% increase from the same period before Bernhardt’s nomination.

The study further declared that "at least two-thirds of Brownstein Hyatt Farber Schreck’s lobbying clients with business before Interior have seen their projects or policies advanced in some way by the department" while Bernhardt has served as both deputy secretary and, since April, secretary.

"Secretary Bernhardt is and always has been committed to upholding his ethical responsibilities, and the allegation of undue influence or political favoritism is blatantly false and without merit," Interior Communications Director Nick Goodwin said in a statement.

Goodwin added that "this disingenuous narrative has been repeatedly peddled by special interest groups that are opposed to the Trump Administration’s priorities of conserving and developing our natural resources for the American people."

Earlier this year, Interior announced that "since 2017, the Department has increased the number of full-time, career ethics professionals by 162 percent, nearly doubling the total hired during the entire eight years of the previous administration."

Bernhardt’s initial recusal agreement covered clients of Brownstein Hyatt, even if he was not a registered agent for those companies.

Bernhardt was a repeat performer with the Brownstein Hyatt firm, representing energy and Western water clients, among others.

Following earlier Interior service during the George W. Bush administration, Bernhardt was a shareholder at the law firm from 2009 to August 2017. He was also an associate at Brownstein Hyatt from 1998 to 2001.

All told, Brownstein Hyatt reported 2018 lobbying revenues totaling $30.9 million. That was a 23% increase over the reported $25.1 million in 2016, the last year of the Obama administration.

Brownstein Hyatt’s website notes that "in 2019 we earned our first No. 1 place on the list of federal lobbying firms, based on revenue," and takes pride in the company’s clout.

A company called Trilogy Metals Inc., for instance, hired Brownstein Hyatt in July as part of its push to dig an open-pit copper mine in one flank of northern Alaska’s remote Brooks Range. The mine would require a 211-mile-long road be partially cut through the Gates of the Arctic National Park and Preserve (Greenwire, Aug. 28).

"It is one of the richest and most-prospective known copper-dominant districts located in one of the safest geopolitical jurisdictions in the world," Trilogy Metals declares on its website.

In August, the new report states, the Bureau of Land Management released its draft environmental analysis of the road that "paved the way for its approval." A final decision could happen next year.