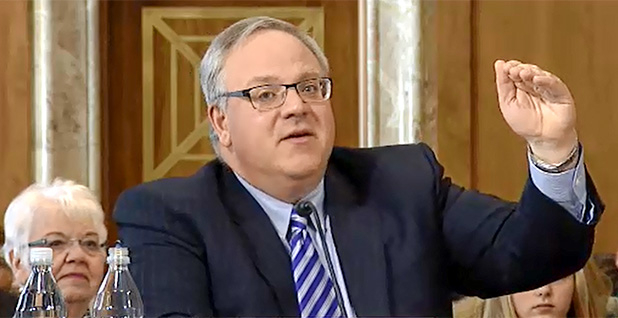 The sage grouse debate captivated Interior Deputy Secretary David Bernhardt from his earliest days in office, and newly obtained schedules show how it lingered atop his agenda.

Sworn in on Aug. 1, Bernhardt had his first sage grouse meeting on the morning of Aug. 3, schedules obtained by E&E News under the Freedom of Information Act show. The hourlong meeting in Interior Secretary Ryan Zinke’s office included half a dozen other staffers.

The gathering was one of the first substantive policy sessions for Bernhardt, after a round of largely administrative obligations that included a briefing on ethics, the setting up of his computer and the picking up of his security card.

A month later, on Sept. 1, Bernhardt’s schedules show the sage grouse popped up again, as the topic of a half-hour meeting involving a half-dozen others.

The meetings occurred as the Interior Department was working on controversial revisions to sage grouse protections (E&E News PM, Sept. 28).

A review team established by Zinke to analyze the federal grouse plans recommended some fundamental changes, including moving away from focusing on habitat protection and instead allowing states to develop "appropriate population objectives" for complying with the plans.

Zinke subsequently directed Bernhardt "to ensure implementation of the recommendations" and to order the Bureau of Land Management to work to "immediately begin implementing" the series of short- and long-term recommendations (E&E News PM, Aug. 7).

The behind-the-scenes, hour-by-hour details illuminated in Bernhardt’s newly released documents, though omitting any descriptions of what was said, mark the first time his packed schedules have been made public. Zinke’s schedules have previously been released.

The schedules also show the dizzying array of topics that take up the time of Interior’s No. 2 official.

Immediately after the late-afternoon Sept. 1 meeting on the sage grouse, for instance, Bernhardt was scheduled for a half-hour meeting with National Park Service officials about new Interior Department uniforms.

"I was a couple steps behind the secretary in recognizing that it is time for the uniforms to be updated," Bernhardt subsequently advised Interior employees in a September memo, adding that "your comments have reinforced the very real need of doing so."

The schedules show, as well, the outside advocacy groups and assorted individuals who have secured face time with Bernhardt in his sixth-floor Interior Department office, which visitors enter by passing next to a large stuffed polar bear.