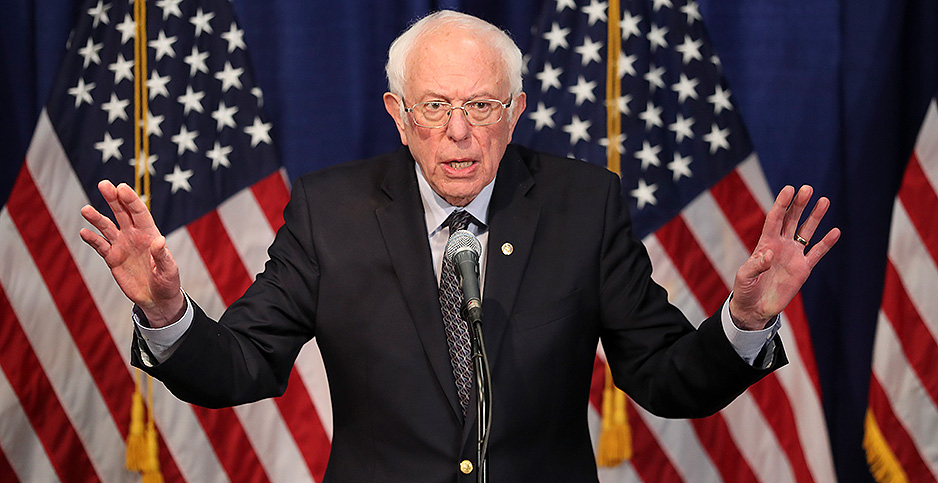 Sen. Bernie Sanders of Vermont said today he would not quit his quest for the Democratic nomination for president. Charles Krupa/Associated Press

Bernie Sanders declined to drop out of the presidential race today despite losing Democratic primaries in Michigan and three other states yesterday.

In a defiant speech in his hometown of Burlington, Vt., the senator acknowledged that the young voters who support him aren’t turning out to the polls and that many voters who like him don’t think he is electable enough, leading to former Vice President Joe Biden’s current delegate lead.

But the Vermont senator said he will keep fighting and is specifically "looking forward" to the debate scheduled for Sunday in Phoenix, where he will spar with Biden one-on-one for the first time in the campaign cycle.

"Donald Trump must be defeated, and I will do everything in my power to make that happen," Sanders said.

"On Sunday night, in the first one-on-one debate of this campaign, the American people will have the opportunity to see which candidate is best positioned to accomplish that goal," he said.

Sanders said he plans to confront Biden on some of the issues where the senator thinks his record and promises are the strongest, like health care, criminal justice and climate change.

"Joe, how are you going to respond to the scientists who tell us we have seven or eight years remaining to transform our energy system before irreparable harm takes place to this planet because of the ravages of climate change?" Sanders said, previewing his plans for the debate.

Biden, seen as the moderate Democratic establishment candidate, currently has 857 delegates out of the 1,991 needed to win the nomination, according to the Associated Press’ count.

Sanders, the progressive and self-described democratic socialist, has 709 delegates. He won New Hampshire, Nevada and some Super Tuesday states, and took a victory in North Dakota yesterday. Washington, the second-largest state of yesterday’s races, has not finished counting ballots.

Both candidates have aggressive climate plans. Sanders would spend far more money, $16.3 trillion, to Biden’s $1.7 trillion, and would rely more heavily on the federal government, like putting it in charge of building enough renewable power capacity to get to 100% renewable electricity in the United States.

Both target 2050 for the country to reach net-zero emissions, though Sanders sets an interim 2030 target for electricity and transportation to hit that goal.

Sanders broke with tradition yesterday and did not give remarks after vote totals started to come in.

In Biden’s remarks in Philadelphia, he was conciliatory toward Sanders.

"I want to thank Bernie Sanders and his supporters for their tireless passion," he said. "We share a common goal, and together, we’ll defeat Donald Trump. We’ll defeat him together. We’re going to bring this nation together."