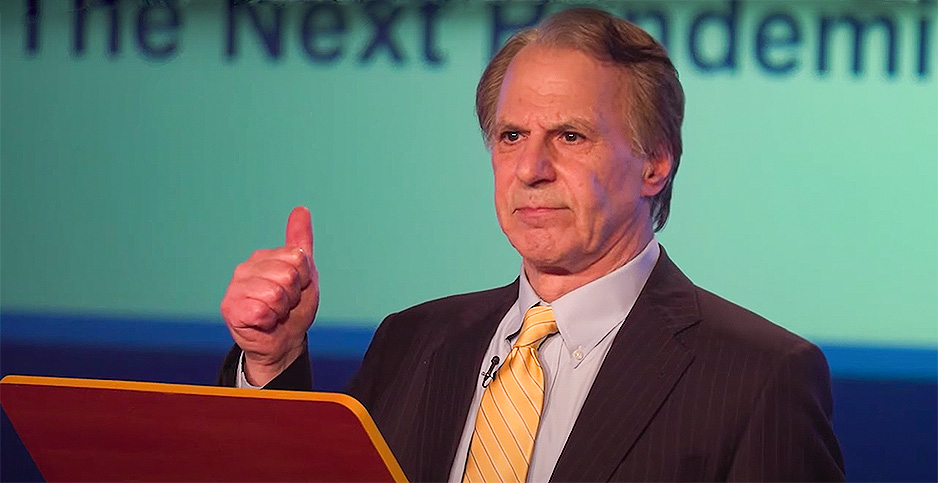 John Barry is an author and historian who has written books on the influenza pandemic of 1918 and the Great Mississippi Flood of 1927. FEMA/YouTube

Pandemics are nothing new for John Barry.

The author and historian spent seven years researching the 1918 pandemic for his book "The Great Influenza: The Epic Story of the Greatest Plague in History."

Now, as the novel coronavirus crisis sweeps the country, Barry is cautioning that the events of 102 years ago offer important lessons for policymakers today.

In particular, Barry has emerged as a vocal critic of President Trump’s handling of the coronavirus crisis and plans to reopen the country.

"If they have a general widespread opening of the country, all of the suffering and economic sacrifices that people have made so far would be wasted and we’d kill a lot of people," Barry said in a recent interview.

Barry played football while a student at Brown University. He is the author of three books, including the 1997 bestseller "Rising Tide: The Great Mississippi Flood of 1927 and How It Changed America." His book about the 1918 flu was published in 2005.

He lives with his wife in New Orleans, where he spent six years on the levee board responsible for protecting the eastern bank of the Mississippi River from flooding.

The 73-year-old recently spoke on the phone with E&E News about criticizing Trump’s handling of the coronavirus crisis, suing oil and gas companies for their role in damaging Louisiana’s coast, and sitting on the bench at college football games.

How did you decide to write a book about the 1918 influenza outbreak?

Well, I didn’t originally intend to write it. What I wanted to do was expand Chapter 10 of "Rising Tide" into a book. But then the project morphed into a book focused on the 1918 pandemic.

When I started writing the book, I thought it would take me two years. Unfortunately, it ended up taking seven years. It grew into a massive project. I wanted to throw everything out the window for about five years, but at the end it finally came together.

Are you planning to update the book with a forward or epilogue about the coronavirus pandemic?

No. Not right now. It’s too much of a moving target.

Does the 1918 flu pandemic offer any lessons for the response to the coronavirus pandemic?

Well, lesson No. 1 is to tell the truth, which I describe in some detail in the book and the afterward. Lesson No. 2 is social distancing. And the two are interrelated because you can’t get people to comply with your public health advice unless you have credibility and they believe in you. They won’t do that unless you tell the truth.

What do you make of President Trump’s handling of the coronavirus crisis?

It’s incomprehensible. He’s failed to use the Defense Production Act, he’s misled people about the severity of the crisis and the availability of testing, and he’s recommended drugs that the [Centers for Disease Control and Prevention] head would not recommend. And on top of all that, he’s politicized the response and he’s encouraged protesters who are protesting the same guidelines his administration laid down.

What do you make of Trump’s plans to open up the country?

I share the concerns with basically everybody in the public health community. At least 95% of the country at this moment in time is susceptible to the most contagious virus that we’ve seen outside of measles. It’s much more contagious than influenza. And it’s absolutely predictable that if they have a general widespread opening of the country, all of the suffering and economic sacrifices that people have made so far would be wasted and we’d kill a lot of people.

Was there a similar movement to open up the country during the 1918 pandemic?

The closings in 1918 were not as extreme as the measures taken today. The only things that were ordered closed were things that brought people together, like church services or movie theaters or saloons. And there was pushback from all those entities. Sometimes they were successful in getting closing orders lifted prematurely. But in many of those cases, cities had to reimpose those orders because the disease came back with a vengeance.

You also wrote a book on the great Mississippi flood of 1927. Did you see that the group American Rivers recently named the Mississippi one of America’s "most endangered" rivers due to climate-induced flood risks?

No, I missed that. I’ve been focused on COVID-19. But I obviously have concerns about the river, even though I’m down in New Orleans, which is probably the safest part of the river in terms of flood protection. You know, if a hurricane were to hit, that would send a surge up the river.

In 2013, you helped the New Orleans levee board file a lawsuit against Exxon Mobil Corp., BP PLC and 96 other fossil fuel companies for their role in damaging Louisiana’s coast. What was the impact of that suit?

You know, the lawsuit is still making its way through the courts. It’ll eventually go to appeals courts. But I think what we started on the levee board was important. And I think the ripples turned into pretty big waves.

How have you been spending your time during the pandemic?

I am very fortunate. I am less affected than practically anyone since I’m a writer, and I can do that anywhere. So I’ve been spending my time writing, and my wife and I go for walks a couple of times a day. We’re both over 70, and we’re fortunate that younger friends have volunteered to go to the grocery store for us. So for us, there’s been minimal adjustment, except that I’m not going to my office.

How old are you?

I’m 73. My wife would object if I told you how old she was. She quotes Oscar Wilde: "A woman who would tell her age would tell everything." [Laughs]

In college, you were on the football team at Brown University. What position did you play?

The bench. We were a bad team, and I mostly sat on the bench. That’s why I got into coaching.

Where did you coach?

I was the head coach at a couple of high schools. I guess people in New Orleans still think the best thing I ever did was coach the Tulane team that beat [Louisiana State University] for the first time in 25 years.

What are you working on these days? Do you have any forthcoming books?

I’ve actually been working on a book on the Louisiana coast, which would be the first time that I started a book and knew something about the subject before I started.

Will the book touch on environmental issues or climate change?

Oh, yeah, everything that has gone into making the coast a disaster, starting with dams on the Missouri River about 2,000 miles upriver. But for the moment, I’ve put that aside. I’m focused full time on COVID-19. I’m part of a group of scientists from about 30 countries who are trying to figure out the messaging and trying to contribute something.