Betting on the climate to win cash 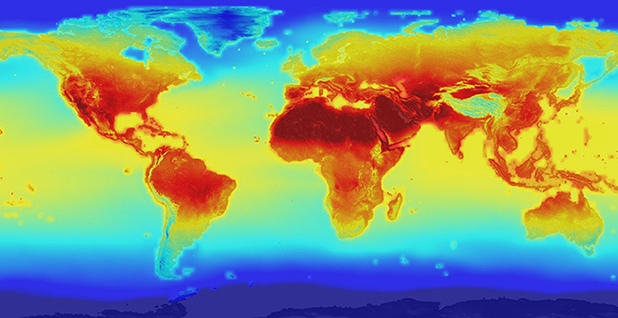 NASA uses this map to show predicted temperature increases throughout the century. Scientists made a bet in 2011 about temperatures in 2015. Photo courtesy of NASA.

True to Hope’s expectations, 2015 was warmer. So warm, in fact, that it was the hottest year in the past 137 years of record keeping. It vaulted past 2014, the previous record holder, by 0.13 degree Celsius (ClimateWire, Jan. 21). Alan Rudge, a British businessman and climate skeptic, has paid up. Ian Plimer, an Australian businessman, has not been reachable, Hope said.

Neither businessmen responded to ClimateWire‘s request for comment by deadline.

Hope said his climate bet was not meant to ridicule the businessmen or make them feel guilty about their views. Rather, his was an intellectual exercise, similar to wagers that litter the history of science. Stephen Hawking in 1975 bet that black holes do not exist. In 1684, British mathematician Christopher Wren promised a book worth 40 shillings (40 cents) to the first person who could explain the elliptical orbits of planets.

"If there is some difference in opinion, we can use it productively and explore it and use it to help us solve problems," Hope said.

With this open attitude, Hope attended a climate conference in 2011 at Cambridge organized by climate doubters. After a session where a presenter said that global temperatures had likely peaked in 2008, Hope took the microphone.

"I said, ‘If you really believe it has gone through a peak in 2008, and would be willing to place a wager on that, talk to me during the break,’" he recalled recently.

Rudge and Plimer approached him later, and the men agreed on the terms of the wager. The businessmen bet £1,000 that global temperatures in 2015 would be at least 0.1 C below 2008 values. Two people witnessed the bet.

Hope would like to find tools to help people manage climate risk. Someone who is running a small business and is anxious about the effects of climate-related weather volatility could place a wager with someone who disbelieves in climate effects, Hope said. This would help offset losses and minimize their risk, he said. Such wagers would be "mutually beneficial," he said.

"What I’m trying to think about is, is there some way we can use this disagreement that people have in a positive way to be able to try and manage the risk we are facing?" Hope said.

Similar tools exist in the business world. For instance, people who invest in foreign markets face the risk of exchange rates moving unfavorably. To hedge, they transfer the risk to another business, which profits if the exchange rate moves favorably and pays out the rate that’s unfavorable.

But financial experts have not yet figured out a market mechanism or options for betting on climate volatility. Part of the problem is that the payouts would be delayed, potentially by decades. Barry Ritholtz, chief investment officer of Ritholtz Wealth Management, called for a setup that would allow trades on global weather volatility in an op-ed in Bloomberg View.

"As I am fond of pointing out, someone has to be on the money-losing side of the trade, and it might as well be the anti-science crowd. Call it Darwin’s revenge: Ignorance as an evolutionary adaptive failure," he wrote in the article.

One group of climate doubters is starting a hedge fund to invest against global warming. James Delingpole, a prominent U.K.-based climate change doubter and columnist, wrote recently in The Spectator that he has donated $75 to the startup.

Hope said that Delingpole was present at the Cambridge conference in 2011 but declined the wager. Delingpole did not respond to ClimateWire‘s request for comment by deadline.

Cash will settle this

Like any good investor, Hope hedged his risk. James Annan, an independent climate researcher at Blue Skies Research, has spent a decade challenging climate doubters to put their money where their mouth is.

"[It is] a way of trying to test whether they really believe what they say," Annan said, "because it’s easy to say things like the world is not going to get any warmer, but it is a lot harder to bet that it is not going to get warmer if they don’t believe it."

In 2005, he invited Richard Lindzen, a professor of meteorology at the Massachusetts Institute of Technology, to place a wager. Lindzen had earlier said that he would bet that temperatures in 20 years would be lower than they were in 2005. Lindzen said he would accept only with odds of 50-to-1. In betting parlance, this means Lindzen believed there was only a 2 percent chance that 2025 would be cooler than 2005.

"I contacted him first and tried to chase him up, and he basically refused," Annan said.

"The temperature goes up and down from year to year because of things like El Niño," Annan said. "You are not going to get every year hotter than the year before."

This bet will mature in 2017. So far, it appears that Annan is winning.

In 2011, Annan offered Hope 5-to-1 odds that 2015 temperatures would be warmer than 2008 — the opposite of the bet Hope had placed with the skeptics. Hope, looking for a way to hedge risk, agreed.

"We both bet against these two guys effectively," Annan said.

Neither of them is sure how he’ll spend the money.

Some bookies are more than happy to accommodate people’s climate bets. Paddy Power, an Irish bookmaker, crunched some odds for ClimateWire. These are theoretical bets because the payouts would be very much in the future.

They offer odds of 14-to-1 that temperatures would be 1.5 C warmer than preindustrial levels by 2030. In other words, they believe there is a 6 percent chance the event will happen.

They offer odds of 1-to-20 (95 percent probability) that temperatures would be that warm by 2100.

And as for Annan’s bet with the Russian solar scientists, they offer 1-to-4 odds (80 percent probability). Annan is likely to win.

As for the historical bets, Stephen Hawking lost his black hole bet to California Institute of Technology physicist Kip Thorne and bought him a year’s subscription to Penthouse. And in 1684, Isaac Newton rose to Wren’s challenge and explained the elliptical orbits of planets.