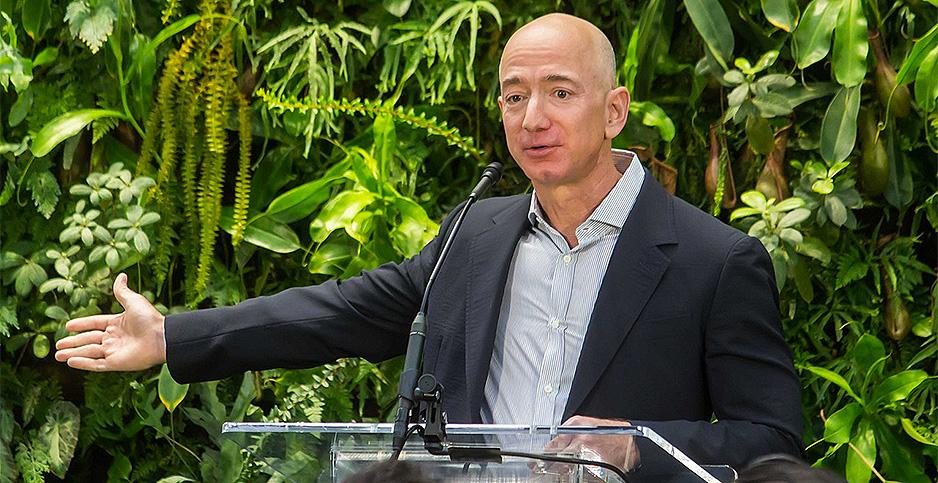 Amazon.com founder Jeff Bezos promised in February to pour at least $10 billion of his personal fortune into fighting climate change, and that the effort would "begin issuing grants this summer."

Tomorrow is the first day of fall, and the Bezos Earth Fund — as he dubbed the venture — has yet to announce a single grant. Further, there’s been little public evidence of much other work or spending.

It’s not the only climate question surrounding Bezos and Amazon. Last week, Amazon’s $2 billion sustainability venture capital fund announced its first five investments. But the company declined to say how much it had put into the privately held startups.

The opacity around the pledges of Bezos and the tech giant he runs have led to growing concern about the speed and sincerity of their climate commitments.

"This is the world’s richest man we’re talking about, and we’re living through a climate emergency," said Dan Firger, the managing director of Great Circle Capital Advisors, a climate-focused advisory firm. Neither Amazon nor Bezos, whose net worth is more than $184 billion, is among Great Circle’s clients.

"We don’t have time to waste, so people are kind of eager for him to get going," said Firger, who is personally willing to give Amazon and its CEO the benefit of the doubt.

Others are more skeptical of their pricey promises.

"They need to do the things they can to control within their own operations. These large checks don’t remove that responsibility," said Elizabeth Jardim, a corporate campaigner at the environmental group Greenpeace USA.

"Amazon’s approach to sustainability is often reactionary," she added.

For example, last year Amazon’s Climate Pledge — a vow to offset more planet-warming carbon dioxide than it emits by 2040 — was unveiled the day before 1,500 of its workers planned to walk out as part of a global climate strike (Climatewire, Sept. 20, 2019).

Then Amazon announced its sustainability fund on June 23, the same day it disclosed that the company’s emissions grew 15% from 2018 levels to nearly 51.2 million metric tons — roughly equivalent to the carbon footprint of Portugal. Later that week, it paid to rename a Seattle sports venue Climate Pledge Arena (Climatewire, June 26).

And Bezos told the world about his massive Earth Fund in an Instagram post Feb. 17, the day before the investigative show "Frontline" was set to air "Amazon Empire: The Rise and Reign of Jeff Bezos." The two-hour-long documentary raised questions about the company’s anti-competitive behavior and other harmful business practices.

Bezos said his billions would "fund scientists, activists, NGOs — any effort that offers a real possibility to help preserve and protect the natural world."

While short on specifics, the brief post spurred speculation that his fund could revolutionize environmental philanthropy and the climate movement more broadly (Climatewire, Feb. 20).

The following week, Bezos and Lauren Sanchez, his girlfriend, discussed "climate, sustainability and preserving the natural world" with French President Emmanuel Macron, the Amazon CEO wrote in another Instagram post. It included the hashtag #BezosEarthFund.

Soon afterward, COVID-19 came to the United States via Seattle, Amazon’s hometown, and Bezos fell silent on his headline-grabbing fund.

But limited work on the philanthropic vehicle has continued behind the scenes, according to government filings.

In July, a recently created company applied to trademark "Bezos Earth Fund" with the Amazon CEO’s written consent. The Delaware-based corporation, Fellowship Ventures LLC, is also registered in Washington state, where it is governed by Paul Dauber, Bezos’ personal lawyer. The filings were first reported by the website Recode.

Yet Bezos and his attorney haven’t revealed basic details regarding the fund, which still doesn’t have its own website. No announcements have been made as to the legal structure, staffing or specific funding opportunities it will pursue.

The lack of public progress has frustrated climate activists.

"With climate change affecting me today, through fires on the west coast, I am pained to see how limited and vague the Climate Pledge Fund and Bezos Earth Fund are," Victoria Liang, a former Amazon software development engineer who helped organize the employee climate walkout last year, said in an email. "While having these funds is a step in the right direction, none goes far enough considering the urgency with which we need to act."

To be clear, Amazon hasn’t been entirely opaque about its climate-related investments.

The company also has a $100 million Right Now Climate Fund operated in conjunction with the Nature Conservancy, an environmental group. The carbon offsets-focused fund has so far committed to spending over $4.1 million on urban greening in Germany and $10 million on forest conservation in the northeastern United States (Climatewire, April 22).

But environmentalists, and some Amazon workers, would like to see the company do more to protect the planet.

Amazon Employees for Climate Justice, a group of current and former Amazonians Liang is a member of, sponsored a shareholder resolution that called on the company to consider the disproportionate environmental harm its distribution centers have on communities of color. Amazon opposed the proposal, which its shareholders ultimately rejected (Climatewire, May 27).

The group also has criticized Amazon for contributing to climate change-denying politicians and lagging behind its tech-sector peers on climate action.

"Amazon is not close to being a leader on climate policy, and they’re falling further behind," Liang said.

Amazon did not respond to requests for more financial details about its Climate Pledge Fund. A spokesperson on background declined to comment on the Bezos Earth Fund.

Dauber, the lawyer who’s overseeing the LLC that sought the earth fund’s trademark, didn’t respond to requests for comment.

At this point, Firger, the Great Circle managing director, is willing to take Bezos and the company at their word.

"Bezos is probably thinking, let me pull every lever I can to make the biggest impact I can to both make sure Amazon is around in 50 or 100 years and we have a planet where we can buy and sell things," he said.

Firger thinks it’s misguided to attack Bezos or Amazon for not focusing exclusively on shrinking the company’s carbon footprint.

"I’m sometimes impatient with critiques of this kind of scale of giving around, you should use that money for something else," said Firger, who previously managed climate and sustainable finance programs at Bloomberg Philanthropies. The charity is bankrolled by Michael Bloomberg, a business executive and former New York City mayor who’s worth about $54 billion.

While Firger emphasized he was not an advocate for billionaires, the reality is Bezos is rich and getting richer. So at this point, the Great Circle leader reasoned, the best thing the Earth Fund and Amazon’s climate fund can do is invest their billions quickly and then spend even more.

"Because," he said, "God knows there are a lot of problems in the world that need fixing."