Bezos said warming is ‘biggest threat.’ Then he helped GOP 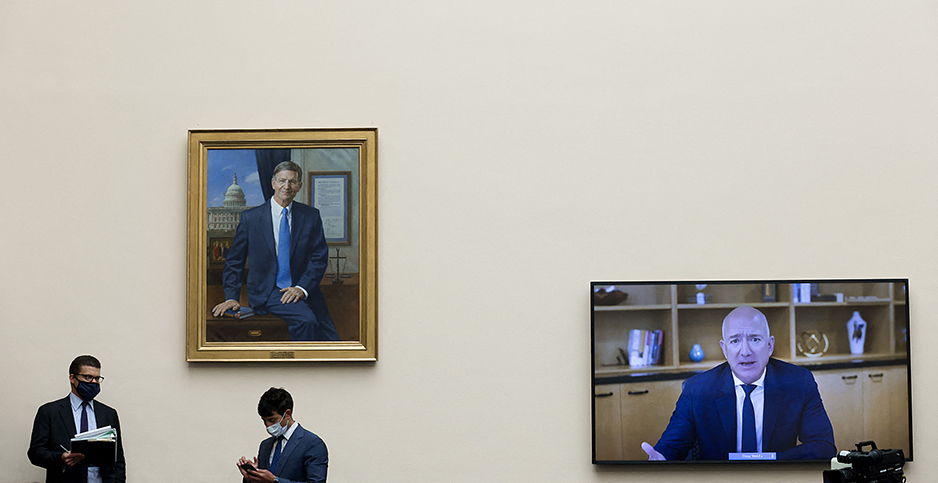 Jeff Bezos, the billionaire founder of Amazon.com Inc., declared in February that "climate change is the biggest threat to our planet." But the political contributions of the world’s richest man and the tech giant he runs are sending a different message on Capitol Hill.

Between January 2019 and this August — a period that coincided with a raft of headline-grabbing climate commitments from Amazon and its CEO — 70% of the political contributions given to senators and their affiliated political action committees by Amazon’s PAC have gone to Republicans, according to an analysis by E&E News.

Vulnerable incumbent Sen. Cory Gardner and his Project West PAC have received at least $32,900 from both Bezos and Amazon since the Colorado Republican took office in 2015, the analysis of Federal Election Commission data found. Since 2019, the company has given at least $10,000 each to Sens. Joni Ernst of Iowa, Susan Collins of Maine and Thom Tillis of North Carolina, three endangered Republicans in next month’s elections.

The name of Tillis’ affiliated group makes the potential implications of such contributions clear: Together Holding Our Majority PAC.

Continued GOP control of the Senate would almost certainly doom any legislative attempt to address the growing climate problem in the next Congress. Majority Leader Mitch McConnell (R-Ky.) has refused to consider substantial measures on climate change.

"There is a serious worry about hypocrisy here, given the emphasis that Amazon has placed in their PR efforts recently on the climate issue," said Brian Berkey, a professor of business ethics at the University of Pennsylvania’s Wharton School. "To be doing all of those things and at the same time donating to the campaigns of elected officials who are very clearly opposed to any of the policies that experts believe would contribute significantly to addressing the problem seems like something that’s hard to argue is consistent.

"It’s hard to see what kind of underlying principles could explain both of those patterns of behavior," Berkey added.

Amazon’s contributions are part of a broader pattern of corporations loudly touting their climate commitments while quietly giving to Republican incumbents whose reelections could undermine them.

Amazon was founded in a suburb of Seattle in 1994 as an online book retailer. By 2018, the company had captured nearly 5% of the U.S. retail market and expanded into everything from cloud computing and entertainment to groceries and home security.

But it wasn’t until last year that Amazon finally revealed the annual carbon footprint of its sprawling operations: 44.4 million metric tons of CO2 — roughly the same emissions as Norway. At the same time, Bezos pledged that Amazon would offset more carbon dioxide than it releases by 2040 and urged other businesses to commit to the same decarbonization timetable.

"We’re done being in the middle of the herd on this issue — we’ve decided to use our size and scale to make a difference," he said in September 2019.

The same month that Bezos announced the company’s so-called Climate Pledge, the Amazon PAC gave a combined $20,500 to political organizations supporting six of the most vulnerable Republicans in the Senate. The outcomes of their elections could determine which party controls the chamber in 2021.

The Amazon.com Services LLC Separate Segregated Fund is, as the PAC’s full name implies, legally distinct from the corporation. But it’s largely funded and directed by Amazon leadership.

The GOP recipients of Amazon PAC money were Ernst, Collins and Tillis as well as Sens. Lindsey Graham of South Carolina, David Perdue of Georgia and Steve Daines of Montana. Some of the tech company’s contributions went to groups like Together Holding Our Majority, a leadership PAC that Tillis can use to raise money for himself and other candidates.

A similar pattern played out earlier this year. Bezos announced at the end of June that Amazon had paid to rechristen a Seattle sports venue the Climate Pledge Arena and launched a $2 billion Climate Pledge Fund that he said would be used "to help protect the planet for future generations."

The following month, the company’s PAC made two donations to committees supporting Collins.

Amazon has also backed two Senate Republicans who analysts with The Cook Political Report believe are in perilous political positions. The campaign of Sen. Martha McSally of Arizona has received three donations totaling $5,000 from Amazon since 2019. Meanwhile, Gardner’s campaign and leadership PAC have gotten at least $20,000 from the company over the same period — more than any other senator.

Gardner is one of only three members of Congress whose campaigns Bezos has directly contributed to during the Trump era. The others are Democratic Sen. Maria Cantwell, who represents his home state of Washington, and former Sen. Orrin Hatch (R-Utah).

Political analysts say that if climate legislation is to have a shot at becoming law during the next presidency, Democrats would need to beat at least three Senate Republicans being helped by Amazon, and deny President Trump a second term. Democrats would then run both chambers of Congress and the White House.

"Amazon is continuing to donate to climate deniers — to Republicans who have no climate plans and have no interest in making climate plans," said Thanu Yakupitiyage, spokeswoman for 350 Action, the advocacy arm of 350.org. "They’re going against their word."

Because of federal disclosure requirements, more is known about the political spending of Amazon and its CEO than of the company’s hyped climate ventures.

Bezos, who’s worth more than $175 billion, also promised to personally bankroll a $10 billion Bezos Earth Fund to support "scientists, activists, [nongovernmental organizations] — any effort that offers a real possibility to help preserve and protect the natural world." But the fund, unveiled in February, has yet to announce a single grant (Climatewire, Sept. 21).

If Bezos means what he says about climate change, the political contributions he and Amazon have made suggest that he sees other pressing challenges for his company.

For instance, Amazon’s PAC last year contributed $7,500 to the Friends of Jim Inhofe. That may seem surprising, since the Oklahoma Republican senator authored the 2012 book "The Greatest Hoax: How the Global Warming Conspiracy Threatens Your Future" (which is now available for $8.99 on Amazon’s Kindle).

Inhofe also brought a snowball onto the Senate floor to cast doubt on scientists’ finding that 2014 had been the warmest year on record. That temperature record has been surpassed in each of the following five years.

But Amazon has a good reason to curry favor with Inhofe. As chairman of the Armed Services Committee, Inhofe has oversight of the Department of Defense, which spent much of the past year reviewing bids for a $10 billion cloud storage contract.

Amazon hired Ryan Thompson, Inhofe’s former chief of staff, to make its case. Since 2019, the company has paid Akin Gump Strauss Hauer & Feld LLP $360,000 for Thompson’s lobbying help. He’s now a senior adviser at the firm and working with a team of other lobbyists to advocate for "legislation related to information infrastructure and data technology," according to lobbying disclosures.

"Clearly you could see a company making contributions to members of the Senate to develop allies in the Senate, who would weigh in on the company’s behalf," said Bruce Freed, the president and co-founder of the Center for Political Accountability, a nonprofit that advocates for greater corporate political disclosure. He was referring to donations to Inhofe and $10,000 the company gave to the campaign of Armed Services ranking member Jack Reed (D-R.I.) last year.

"The company has to make some important choices on this," Freed said. "Where does it place its priority, both business-wise and reputationally?"

Inhofe isn’t the only denier of climate change to benefit from Amazon’s campaign contributions. In the past 20 months, its PAC has supported dozens of Republican senators who have cast doubt on the overwhelming scientific evidence that the planet is warming and human activity is to blame. They include Gardner, McSally, Ernst, Tillis, Daines, Perdue and McConnell.

Some of those lawmakers, like Gardner, have changed their tunes on climate science over the years.

In his first Senate campaign, the Colorado Republican refused to answer whether he believed "humans are contributing significantly to climate change."

Gardner’s campaign website now describes him as a "national leader" on "climate change policies that achieve results." But during his time in office, he repeatedly voted to block EPA from regulating carbon dioxide and opposed the Obama administration’s efforts to reduce leaking methane, a powerful heat-trapping gas, from oil wells on public lands.

In total, Amazon has given $224,000 to the campaign committees or PACs of Republican Senate candidates since 2019, E&E News found. Over the same time period, it’s donated $94,000 to Democratic senators.

Amazon didn’t answer detailed questions about the purpose and timing of specific contributions made by its PAC and CEO and how those could undermine its Climate Pledge. Instead, the company sent a three-sentence statement suggesting it pursues a constellation of issues to advance its interests, with climate change being one among them.

"Amazon contributes to policymakers who oversee issues that affect our business, customers, and employees," the company said. "That does not mean we agree with any policymaker 100% of the time. Amazon believes human-induced climate change is real, serious, and action is needed from the public and private sectors."

The PAC of tech rival Google, which has been carbon neutral since 2007 and last month said it had offset all of its historic emissions, has donated to PACs supporting Ernst, Tillis and Gardner (Greenwire, Sept. 14).

During the same period, Gardner’s Project West PAC has also received at least $2,500 from groups affiliated with Facebook Inc., Intel Corp., Microsoft, Verizon and BP PLC. Those big-name companies have all made splashy commitments to go carbon neutral.

Google and Verizon did not respond to requests for comment.

Microsoft, for its part, says it’s important to support a wide range of lawmakers. "We’ve learned that engagement — even when individuals hold different positions — is an essential part of achieving progress," said a spokesperson for the company, which has vowed to remove more carbon from the atmosphere than it emits by 2030 (Climatewire, June 25).

Intel, on the other hand, has an explicit "strategy of bipartisan giving," according to spokesman William Moss. The company makes political "funding decisions that we believe in aggregate will have the greatest benefit for our stockholders and key stakeholders."

Aseem Prakash, a University of Washington political science professor, wasn’t surprised that Amazon has come to the aid of politicians in need — regardless of their climate views. The corporation, he noted, is also concerned about antitrust crackdowns, the loss of government contracts, scrutiny of their privacy practices and changes to the tax code.

"I recognize a lot of people don’t agree with me," he said. "They think it’s important, but not the only issue."

Yet corporations that cut checks without thinking about their broader impacts could find themselves out of step with a more politically engaged marketplace, according to Freed of the Center for Political Accountability. Failing to match political spending with public pronouncements can have costly consequences.

Intel, for example, was hit with a wave of bad press in 2018 when the newsletter Popular Info highlighted the chip-maker’s contributions to Rep. Steve King. The Iowa Republican, who had a long history of making racist remarks, became politically toxic for Intel and other companies that profess to care about diversity and inclusion after King endorsed a white supremacist running to be the mayor of Toronto.

"Companies no longer have the luxury of narrowcasting — giving to a senator because they’re a member of a committee that’s important to them and ignoring everything else that goes with it," Freed said. "Investors, consumers and even employees are looking for an alignment. They want the companies to have their money where their mouth is."