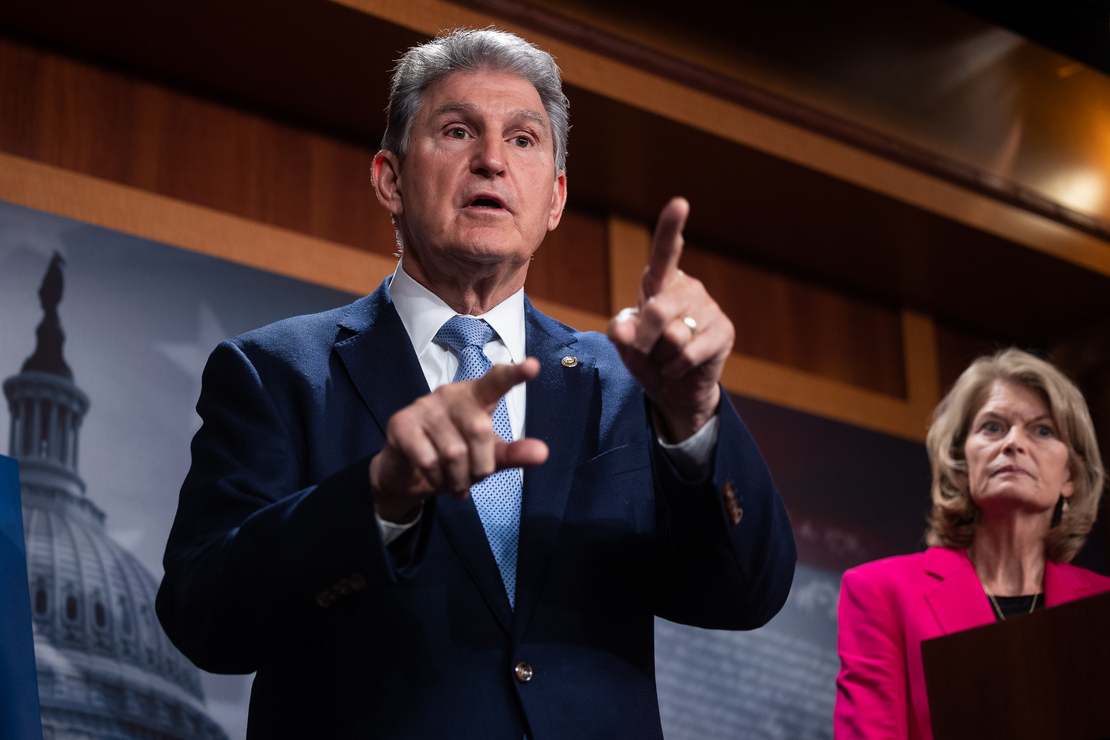 While Capitol Hill is coalescing around legislation to block Russian energy, the White House is rejecting the idea, saying such actions could disrupt the global supply of oil and natural gas.

The disconnect is likely to have major implications for how quickly a supplemental aid package to Ukraine can move through Congress, despite the growing bipartisan momentum behind additional financial punishment for Russia’s invasion.

Senate Energy and Natural Resources Chair Joe Manchin (D-W.Va.) and Sen. Lisa Murkowski (R-Alaska), along with 16 other senators, unveiled legislation yesterday that would codify the Russian import ban so long as a national emergency remained in place. Reps. Josh Gottheimer (D-N.J.) and Brian Fitzpatrick (R-Pa.) introduced a companion bill in the House.

The ban would affect all fossil fuel energy imports, including crude oil, liquefied natural gas and coal. The bill does not affect product already in transit or critical mineral shipments like uranium, which make up a significant chunk of domestic nuclear energy fuel use.

“Energy has become a weapon of war,” Manchin said at a news conference unveiling the bill yesterday.

The United States imported approximately 670,000 barrels of oil a day from Russia in 2021, according to International Energy Agency statistics. Major oil industry companies have already started to limit their exposure to Russian imports, in addition to announcements from companies like BP PLC and Shell PLC that they would pull out of production agreements with Russia. The American Fuel and Petrochemical Manufacturers, America’s biggest oil refining lobby group, has also endorsed a ban on Russian imports.

Yesterday, House Speaker Nancy Pelosi (D-Calif.) took her stand on the matter. During her weekly news conference, she said she supported the idea of an import ban (Greenwire, March 3). A spokesperson for Majority Leader Chuck Schumer (D-N.Y.) told reporters that leadership “is looking at” the proposal.

The White House has offered competing visions about whether it would further sanction Russian energy. Earlier this week, officials would not rule out further penalties on the Russian energy sector, saying “all options remained on the table.”

Yesterday, however, the White House suggested a Russian import ban would run counter to President Biden’s promises to limit the financial blowback from sanctions.

“We don’t have a strategic interest in reducing the global supply of energy,” White House press secretary Jen Psaki told reporters. “That would raise prices at the gas pump for the American people, around the world, because it would reduce the supply available.”

Manchin dismissed that rebuttal as “irresponsible” during his press conference. “They’re so wrong,” Manchin said.

Manchin said he had talked with several CEOs of major oil companies, who told him they backed his position that the price of oil would not rise to a level that would drastically affect consumers.

Manchin’s efforts have not been limited to an import ban. The West Virginia moderate has also made a turn to full-throated support of unleashing American energy production, including attacks on Biden administration policies on natural gas pipelines and limited lease sales on federal lands (E&E Daily, March 3).

“This is, in many ways, an energy war,” Manchin said in prepared remarks during a hearing yesterday. “And we need to treat it with that kind of gravity.”

Manchin said, “I stood by the new Administration when they called for a pause on the federal leasing programs last year. But the time for pausing has come and gone.”

Republicans have been making similar arguments as they seek to repackage a year’s worth of energy policy attacks to fit within the confines of the Ukraine crisis.

As bipartisan enthusiasm is building around passing a Russian energy import ban, House Republicans are escalating a push to add broader language to a portion of the fiscal 2022 omnibus spending bill that would contain support for Ukraine during the ongoing crisis.

And they are hoping Manchin and Murkowski, two centrist power players across the Capitol, will support the effort.

Earlier this week, the top Republicans on the House Energy and Commerce Committee and Natural Resources Committee, Reps. Cathy McMorris Rodgers of Washington and Bruce Westerman of Arkansas, respectively, introduced a bill, H.R. 6858.

That bill would allow completion of the Keystone XL pipeline, streamline permits for liquefied natural gas exports and restart oil and gas leasing on federal lands and waters.

House GOP leaders want to incorporate elements of the McMorris Rodgers-Westerman measure into the Ukraine supplemental. Last night, aides to Manchin and Murkowski were invited to a briefing on the proposal, convened by Republican staff for the House Energy and Commerce and Natural Resources panels and representatives from the office of House Minority Leader Kevin McCarthy (R-Calif.). Democratic staff for the two House committees also attended, according to several congressional sources aware of the meeting.

Republicans see a new opening to gain traction on the environmental policies they’ve been promoting since the beginning of the Biden administration, sensing that Democrats don’t want to appear weak on Russian aggression or be blamed when their reliance on foreign oil raises gas prices at home.

“We know that Putin funds his military with energy proceeds — $20 billion we spent last year buying Russian oil,” McMorris Rodgers told E&E News yesterday. “We believe that the supplemental for Ukraine is the best way we can help Ukraine flip the switch here in the United States, which means saying yes to the permits. … We’re working to get as much included into the supplemental as we can.”

But Democrats aren’t likely to make the kind of concessions Republicans hope for. Though one source familiar with the matter said House and Senate committee staff on both sides of the aisle are discussing “the art of the possible on energy” in a Ukraine aid package, Democrats won’t agree to authorizing the Keystone XL pipeline or expanding domestic energy production.

Asked whether Pelosi was in any way encouraging bipartisan talks, a second source aware of the dynamics at play said that was “not correct.”

“Republicans at the committee-level talks on the omni[bus] are trying to insert proposals that will neither lower gas prices for Americans or provide an additional drop of energy for Europe,” the source added.

“Energy is a distraction and a subterfuge by Republicans,” Hoyer said. “All they want to do is talk about the things they think that the administration is not doing.”

Manchin was also noncommittal. Leaving his press conference on his bill to ban Russian oil exports, Manchin told E&E News yesterday that he was unfamiliar with what Westerman and McMorris Rodgers had proposed, but reiterated his support for reopening liquefied national gas lines and an “all-of-the-above energy policy.”

Asked whether he was pushing to add language to achieve these goals in a government spending bill still in the drafting stages, Manchin quipped, “I think that’s a good idea; I’ll do that.”

While Republicans appear unified in their approach to limit Russian energy and promote domestic production, Democrats are instead working to build support for action to punish Russia based on their distrust of unabated domestic oil production and fossil fuel companies’ profits.

Sen. Martin Heinrich (D-N.M.) said he backs the idea of an import ban in theory but wanted more details about how to structure a bill to avoid unintended consequences.

“When we quit importing from Venezuela, there was a ramp in that, as opposed to a cliff, to make sure that consumers weren’t overly exposed to changes in prices,” Heinrich said. “I think those kinds of details matter in all of these sanctions bills.”

Rep. Kathy Castor (D-Fla.), the chair of the House Select Committee on the Climate Crisis, said she favors the ban and sees it as the emerging consensus among House Democrats.

Castor conceded that she was concerned that Republicans’ industry allies would “take advantage of the situation to elevate the profits of oil and gas companies.” She said Democrats need to continue their push for net-zero emissions and investments in renewable technologies, including the domestic production of computer chips needed for manufacturing solar panels.

“We’ve got to stay committed to clean energy,” she said. “Putin did not change the [climate] science.”

Sen. Ed Markey (D-Mass.) meanwhile took to the Senate floor to attack Republican rhetoric surrounding the debate, even as he backs an oil import ban himself.

“As we wage war against this fossil fuel-funded invasion, I stand here again to denounce our own addiction to fossil fuels, along with Big Oil’s relentless attempts to sabotage clean and renewable energy with the support of the Republican Party,” Markey said.

Biden administration officials have indicated that one approach to the energy price spike would be a broader economic shift away from fossil fuel reliance, albeit through the embrace of more renewable energy and electric vehicles.

“Republicans will always use a crisis to advance their political agenda,” Heinrich said. “The real answer in the long run is to be off these fossil fuels that create all these opportunities for international mischief by people like Putin.”