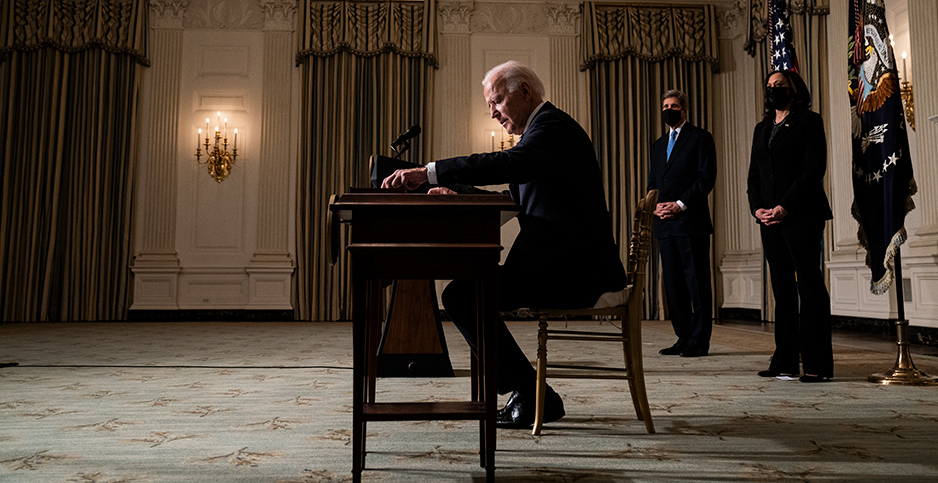 Republicans spent President Biden’s first week in office bashing his climate actions. The administration responded yesterday by rolling out even more — and bragging about it.

National climate adviser Gina McCarthy spent the day jumping between media appearances and talking to official Washington through the daily White House briefing and an environmental journalism conference. But she also touted the new climate actions to more mainstream audiences.

"We’re not asking for sacrifice here. … This is all about recovering from the COVID crisis," she said on the "Today" show, emphasizing environmental justice. "We owe investments to those communities, and we’re going to deliver them."

After struggling to respond to "war on coal" attacks under President Obama and all but ceding the Green New Deal slogan to conservatives under President Trump, Democrats are now acting like climate policy is a political winner.

"If you’ll notice," Biden said during the signing ceremony for his executive actions, "the attitude of the American people toward greater impetus on focusing on climate change and doing something about it has increased. Across the board — Democrat, Republican, independent."

Environmentalists and activists have spent years — and untold sums of money on polling, advertisements and voter mobilization — pushing Democratic leaders to embrace exactly that point.

And though the administration’s biggest climate fights are still ahead, yesterday nevertheless marked a culmination of Biden’s transformation from the climate moderate who squabbled with green activists during the primaries to the president who enacted those activists’ demands.

"Today makes clear that President Biden hears our generation’s demands loud and clear, understands the power of our movement, and is serious about using executive power to deliver on his campaign promises," said Varshini Prakash, co-founder of the Sunrise Movement, in a statement.

It’s not without risk. Along with relatively symbolic actions like rejoining the Paris climate agreement, Biden has blocked construction of the Keystone XL oil pipeline and halted new oil and gas leasing on public lands — actions that disrupt thousands of jobs, even if many were temporary construction positions.

"Even a temporary moratorium [on public land leasing] is incredibly damaging to the American economy, global emissions, and union jobs," five Texas Republican members of Congress wrote yesterday in a letter to the administration.

Industry groups and Republicans argue Biden is sacrificing thousands of jobs for negligible emissions impact; the real aim, they say, is to appease his base.

"Biden’s ban is an overreach meant to satisfy the environmental left, but it would seriously harm the livelihoods of tens of thousands of westerners and put at risk millions more as state services become unfunded," said Kathleen Sgamma of the Western Energy Alliance, which is challenging the public lands moratorium in court.

To be sure, climate policy has been instrumental to Biden winning support from progressives. And many of the activist groups that pooh-poohed Biden’s candidacy are now praising him, even as they urge him to do more.

But Democrats are confident they can win the economic argument, too.

"We’re explicitly doing this because our economy is, right now, stagnant," McCarthy said in the White House briefing.

"We have millions of people out of work, out of jobs. Millions of people that are afraid they can’t feed their families. If you’re faced with that, what do you do? You boost the economy and you grow jobs. But why, at the same time, aren’t we thinking about the weaknesses of our current economy in terms of the number of environmental justice communities that have been left behind, the number of people who are breathing dirty air and their kids are getting asthma."

She added: "So instead, let’s think about it all at the same time. I know it’s a crazy idea in a bureaucracy — you’re only supposed to do one thing. Well, we’re going to do and think about all of it."

So far, that approach is holding together the coalition that Democrats need to advance climate policy.

West Virginia Sen. Joe Manchin, incoming chairman of the Senate Energy and Natural Resources Committee and one of the upper chamber’s most conservative Democrats, said he spoke to the White House the night before the executive orders were released.

He noted Biden’s orders commit to directing climate investments into areas that have lost fossil fuel jobs, such as West Virginia.

"I intend to hold the Administration to this while ensuring that the burden of any acceleration in already changing markets is not unduly placed on these communities that powered our nation to greatness," he said in a statement. "I stand ready to work with this Administration to ensure West Virginia communities see these much needed investments."

That’s a change from the past, when advocates across the political spectrum found it easier to see the costs of climate action over its benefits.

Jason Walsh — executive director of the BlueGreen Alliance, a collaboration between unions and environmentalists — said the Biden administration has figured out how to nest its climate policy in areas of clear economic benefit, such as infrastructure.

"So I think that’s just as important as their recognition that climate is a political winner."