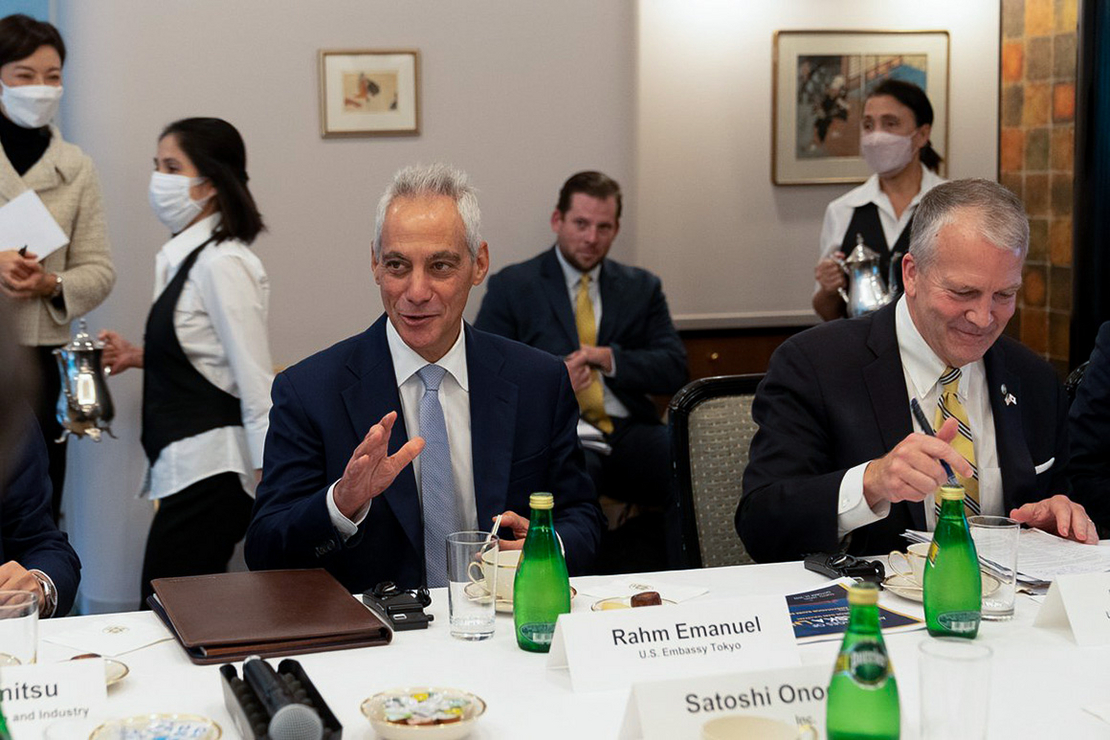 Rahm Emanuel, the U.S. ambassador to Japan, is pictured with Sen. Dan Sullivan (R-Alaska) during a meeting about liquefied natural gas. @USAmbJapan/Twitter

The Biden administration signaled support Monday for a massive liquefied natural gas project in Alaska, touting the energy benefits of a proposal critics have called a terrible idea.

U.S. Ambassador to Japan Rahm Emanuel held a summit in Japan focused on the proposed Alaska LNG project, which would include about 800 miles of pipeline as well as a gas export facility in Nikiski, Alaska.

U.S. and Japanese officials discussed how “Alaska LNG can provide stable, sustainable, and affordable energy sources to Japan,” according to a statement Monday from Emanuel. He indirectly referenced Russia’s war in Ukraine, a conflict that has pushed numerous countries to seek new supplies of energy.

“No need for Russian gas when #America stands ready to supply it,” Emanuel said on Twitter.

The talks in Tokyo come as the Biden administration has pushed to boost U.S. LNG exports to Europe following Russia’s invasion of Ukraine in late February. U.S. LNG exports are forecast to average 11.7 billion cubic feet per day in the fourth quarter of 2022, according to a report last month from the U.S. Energy Information Administration, up 1.7 bcf per day from the third quarter of this year.

The Alaska LNG project is being developed by the Alaska Gasline Development Corp. (AGDC), a state corporation. It is looking to ship LNG primarily to Asian markets. The Federal Energy Regulatory Commission approved the project in 2020 (Greenwire, May 21, 2020).

The $39 billion project has garnered the support of policymakers such as Alaska Gov. Mike Dunleavy (R) and Sens. Dan Sullivan and Lisa Murkowski, both Republicans who represent Alaska. The $39 billion is for the proposed pipeline, a gas treatment facility on the North Slope and an LNG plant, according to Tim Fitzpatrick, a spokesperson for AGDC.

“Our ongoing conversations with investors and developers, like the one early this morning, are to address funding and other aspects of completing the project,” Fitzpatrick said in an email Monday.

But environmental groups have criticized the fossil fuel project, with groups opposing it because they do not want to see more oil and gas infrastructure built (Energywire, June 30). Concerns have ranged from climate change to the ecosystem in Alaska.

Fitzpatrick said the Alaska LNG project is the only one under development by the company. The development corporation has signed multiple letters of intent with potential LNG purchasers, he said.

The project’s benefits include proximity to Asian markets, a “strong safety culture” and a “cold climate that ensures more efficient production,” according to a video on Alaska LNG’s website.

The facility, which could export up to 20 million metric tons of LNG annually, has faced legal challenges over a FERC analysis of the project’s climate risks (Energywire, Sept. 15).

One environmental group said the Alaska LNG summit appeared to be an example of the U.S. government trying to facilitate deals between project developers and Japanese companies.

“This is part of a broader pattern,” said Talia Calnek-Sugin, the associate director of legislative and administrative advocacy for the Sierra Club’s Beyond Dirty Fuels campaign, in an email.

Neither the Department of State nor the White House provided a comment to E&E News in time for publication.

The Department of Energy released an environmental review of the project earlier this year that said the Alaska LNG project wouldn’t raise greenhouse gas emissions, assuming LNG exports elsewhere would continue to meet demand even if the pipeline and terminal do not get built (Energywire, June 30).

A spokesperson for DOE’s Office of Fossil Energy and Carbon Management said Monday that the agency did not participate in the summit because of the ongoing environmental review. A final supplemental environmental impact statement is slated to be finalized next month, the spokesperson said.

In his Monday tweet, Emanuel said he was proud to convene a group that included Sullivan, Dunleavy, State Department energy adviser Amos Hochstein and representatives from the Japanese government to “discuss how @AlaskaLNG can be part of [Japan]’s energy future.”

Sullivan, a member of the Senate Environment and Public Works Committee, described the summit as a “significant gathering of stakeholders seeking to advance the Alaska LNG Project” in a statement Monday.

“This action-oriented Alaska LNG Summit is an outgrowth of these meetings that we believe will advance the prospects of the Alaska LNG project,” said Sullivan, who thanked Emanuel for hosting the gathering.

Fitzpatrick with AGDC said no offtake agreements for purchasing LNG from Alaska were announced following the summit.