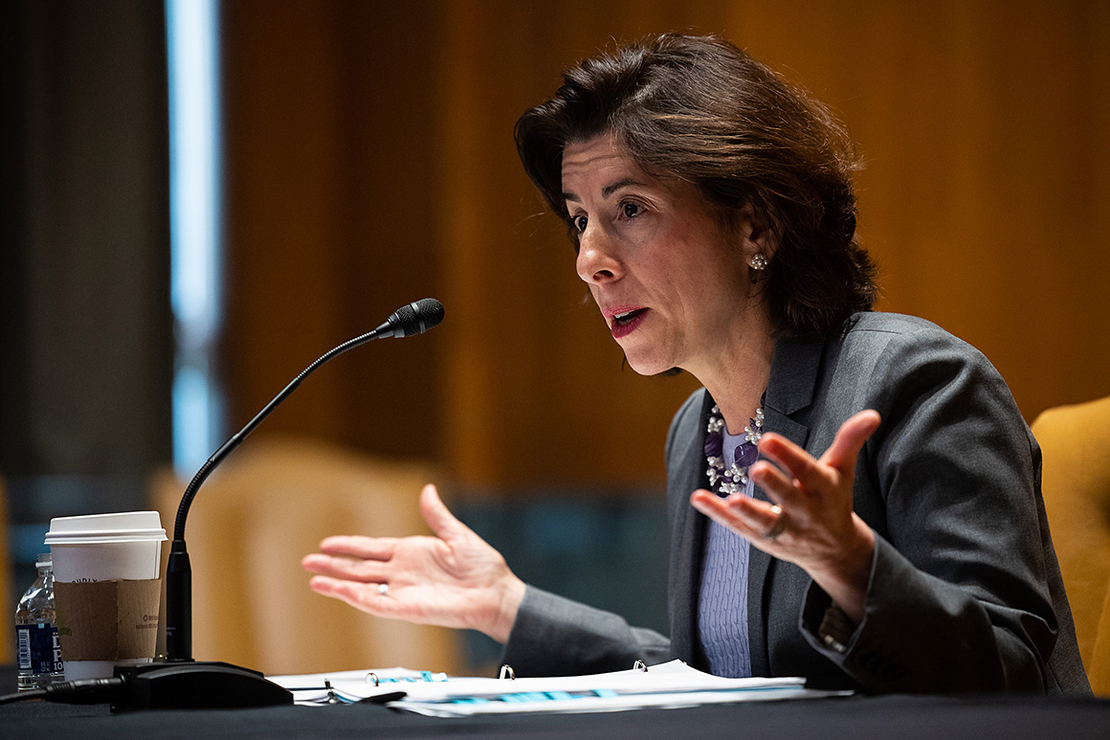 The Commerce preliminary probe, launched in March, is assessing whether to slap tariffs of 50 percent to 200 percent on solar panels and parts imported from four Southeast Asian countries. It was prompted by a request by California-based panel maker Auxin Solar, which says Chinese producers are unfairly skirting U.S. duties by performing minor assembly in those four countries.

The review has spurred a wave of condemnation from solar trade groups, utilities and developers, who blame it for unsettling the industry’s economics and jeopardizing the future of the industry. About 80 percent of the panels used by U.S. companies trace back to Southeast Asia, according to industry groups.

In testimony yesterday before the Senate Appropriations Committee, Raimondo expressed sympathy with the alarm of the solar industry and its congressional advocates. “I share the sense of urgency. I understand how fragile the solar supply chain is and how we need to move forward quickly,” she said.

The secretary said tariffs of 200 percent, the upper end of Auxin’s requested range, were “exceedingly unlikely” adding that in the past, Commerce has tended to apply tariffs at rates below 20 percent.

“I am in no way predetermining what this [outcome] will be, if it will be anything,” Raimondo said. “I do think it is important to say that the 200 percent is an extreme case and not fitting with the precedent we’ve had.”

She also hinted that Commerce’s preliminary review could end well before the department’s August deadline. “There is nothing that prohibits us from going faster, and I assure you we’re going to go as fast as possible,” said Raimondo.

Yet the department’s hands are effectively tied, she told senators, saying Auxin’s request had met the criteria to begin a review.

“There are five criteria, five criteria only that [Commerce’s International Trade Administration] can look at,” she said. “If they find that the case meets the criteria, the threshold of the five criteria, we are obliged to initiate, which is what we are doing.”

“This is complex, and there are two sides to this story,” she added.

“I personally am outraged by some of the things the secretary said,” said Abby Ross Hopper, SEIA’s president and CEO, on the call.

Commerce had already established that turning solar wafers into cells — an operation that happens in some Southeast Asian factories — could not be considered “minor” assembly, meaning the department should have immediately rejected Auxin’s petition, argued Hopper.

“This is an issue where clear precedent exists, and the secretary should utilize that precedent and make a determination as soon as it’s appropriate,” she added.

Auxin Solar, for its part, has accused solar groups of “fearmongering” with their predictions of catastrophe, saying that previous rounds of import tariffs ended up being less harmful than industry groups had warned.

In an interview with E&E News last month, Auxin’s CEO, Mamun Rashid, said the Biden administration’s climate goals were perfectly attainable even with new solar tariffs and that the protections would allow for a “renaissance” of solar manufacturing (Energywire, April 29).

“In the last 14 years, we have seen tariffs being instituted and we’ve seen the predictions that were made on what would happen if the tariffs were put in place. And it has never materialized. Deployments have continued to grow double digits and outperform predictions,” said Rashid then.

“If cheating is going on, then we’d like to see trade laws enforced,” he added.

The latest of those — an analysis from Rystad Energy released Tuesday — estimated that nearly two-thirds of this year’s solar additions were being threatened in the U.S., partly because of the Commerce probe (Energywire, May 11).

Multiple investor-owned utilities, like Duke Energy Corp., Georgia Power, and NextEra Energy Inc. have also reported delays on large volumes of new solar (Energywire, May 22). One Indiana utility, Northern Indiana Public Service Co., has said it will delay a coal plant retirement by two years because of the probe (Energywire, May 5). Another, Dominion Energy Inc., has said solar project costs could rise around 15 percent if a 50 percent tariff is applied — an increase it would likely pass along to ratepayers, according to UtilityDive.

Raimondo’s defense of the probe came the same day as the release of an International Energy Agency (IEA) forecast with a nugget of good news for the global solar and wind industries, however. New renewable projects aren’t losing their competitive edge on fossil fuels, the analysis said.

In the U.S., wind and solar broke a multiyear streak of cost decreases last year, thanks to the rising price of shipping and raw materials, according to previous analyses (Energywire, Feb. 16).

Wind and solar have grown more expensive around the rest of the world, too, according to the IEA’s report. But the cost increase “has not hampered their competitiveness” and will not in the rest of 2022 and 2023, either, wrote the IEA, adding that the price of fossil fuels have risen “at a much faster pace.”

Still, that is not fully a cheery story for the climate, according to IEA. Energy experts there have estimated that annual clean energy investments need to triple in order to zero out global carbon dioxide emissions by midcentury. In yesterday’s forecast, the IEA said that renewable additions would remain “stable” in 2023 “unless new and stronger policies are implemented” — a far cry from the explosion of new capacity that would be necessary for climate goals.

The IEA blamed two new trade policies: a ban on imports linked to Xinjiang, China, where production can allegedly involve forced labor, and the Commerce probe.

The probe itself, and the possibility that it could end in new tariffs, is “reducing the availability of solar PV modules,” the IEA found.