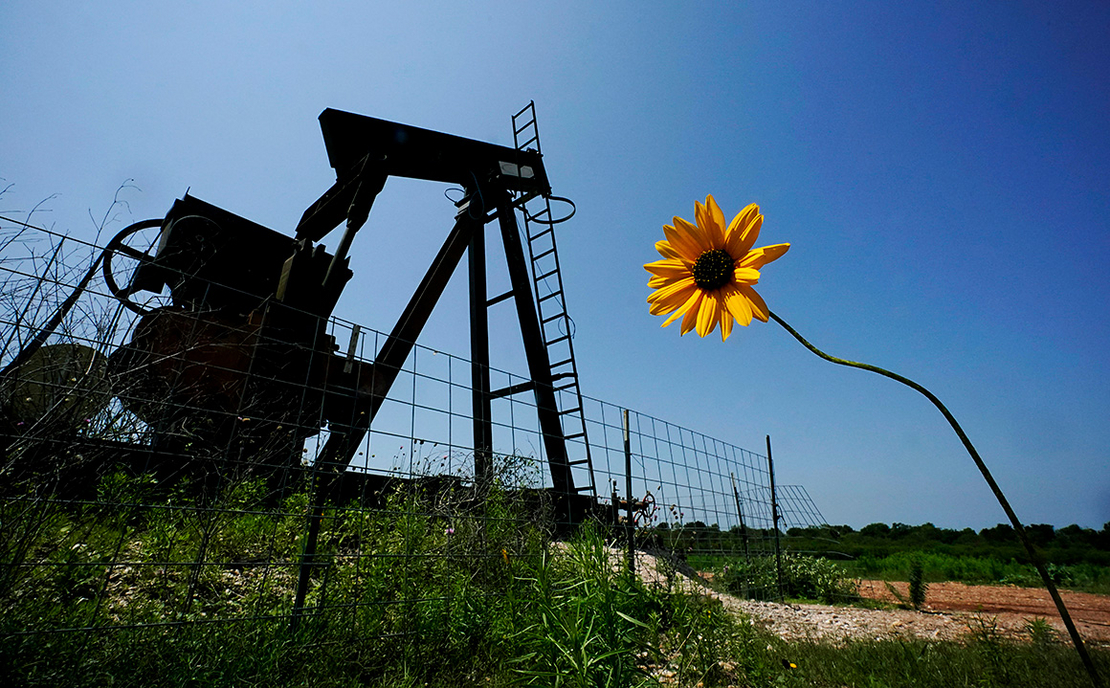 A wildflower blows in the wind near an old pumpjack on Molly Rooke's ranch in 2021 near Refugio, Texas. Oil and gas drilling began on the ranch in the 1920s, and there are dozens of orphaned wells that need to be plugged for safety and environmental protection. Eric Gay, File/AP Photo

The funding is part of a $4.7 billion orphaned well program greenlighted by last year’s Infrastructure, Investment and Jobs Act. The bipartisan program offers grant dollars to qualifying states to pay for finding abandoned wells, tracking their methane releases, plugging them to stem polluting gases and restoring the land at the surface.

Interior Secretary Deb Haaland today praised the Biden administration’s progress so far in building the first-of-its-kind program. “President Biden’s Bipartisan Infrastructure Law is enabling us to confront long-standing environmental injustices by making a historic investment to plug orphaned wells throughout the country,” she said in a statement.

Historic oil and gas activity in regions like Appalachia and the West goes back more than a century, with many old wells lost. Additionally, oil and gas price busts have left more wells abandoned, their original drillers out of business or difficult to trace. When left unchecked, those wells can release greenhouse gases like methane and pose combustion risks.

All told, states have flagged more than 10,000 high priority wells for cleanup, the first in line of a nearly 130,000 backlog of unreclaimed known well sites, Interior reported today. That number is expected to rise as federal funds bolster state efforts to identify hidden or lost orphans.

Of the nearly two-dozen states receiving federal funds, Kentucky, Kansas and Oklahoma have more than 1,000 wells identified for plugging. But hundreds of wells have been found in states like Colorado, Illinois and Texas.

The half-billion-dollar funding announced today will be spread across 22 states that have been allocated $25 million in initial grants. Two others — Arkansas and Mississippi — will receive $5 million each.

Mississippi is aiming to create an inventory of its orphaned wells and kick off a program to track methane. Other states devoted to methane measurement before and after plugging are California and West Virginia.

Meanwhile, Arkansas, Kansas, New Mexico and Ohio have said they will focus first on cleanup in disadvantaged communities, and Arizona, Louisiana and Montana have committed to hiring local, giving small businesses preference.

Wyoming, which has been regularly plugging wells through a tax on industry for years, is also among the first states to receive grant money. It estimates some 300 jobs will be created by its upcoming plugging activity with federal funds.

Today’s announcement is part of the $1.15 billion “phase one” of the national orphaned well program. An initial $33 million was also used recently to plug nearly 300 orphans on federal lands.

“At the Department of the Interior, we are working on multiple fronts to clean up these sites as quickly as we can by investing in efforts on federal lands and partnering with states and Tribes to leave no community behind,” Haaland said in a statement.