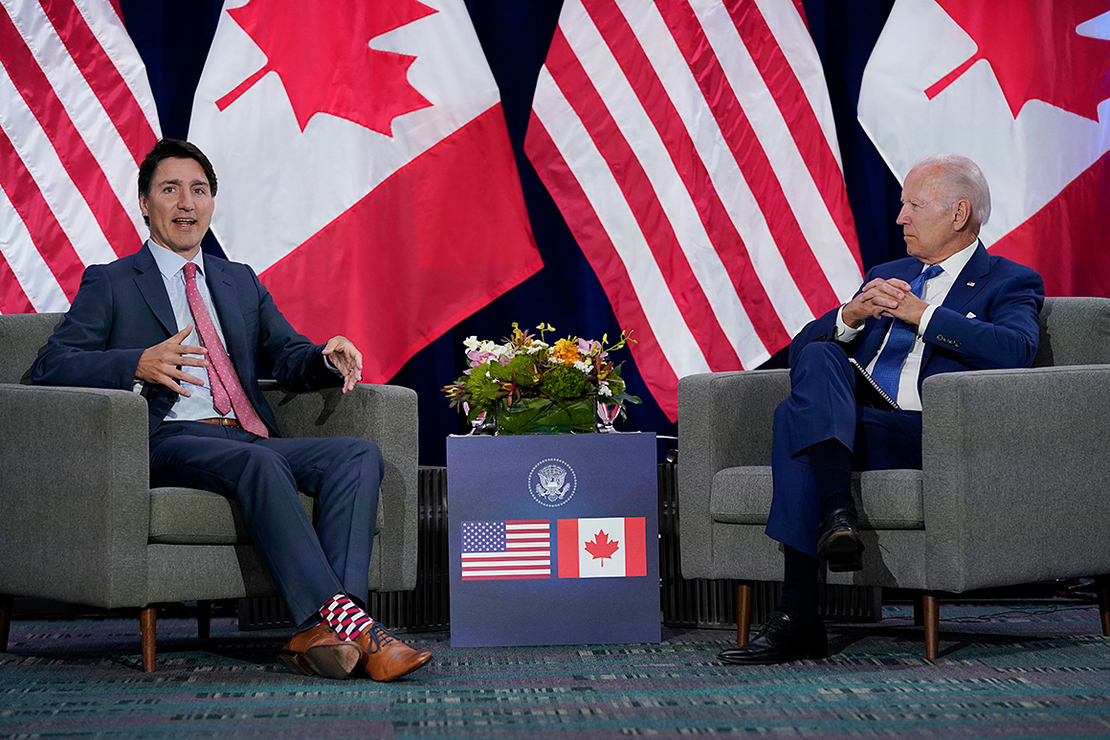 Manufacturing low-carbon energy and transportation products like electric vehicles can call for a set of unique raw minerals and materials that are often produced and processed in China, and are not mined in the U.S. at all. It’s an import imbalance that security hawks believe will be a strategic vulnerability in a decarbonizing world.

To wean off Chinese mining, the Biden administration is looking at getting those minerals from Canada — and even giving money toward their development.

Canada, a premier mining jurisdiction and favorite destination for the industry, may benefit from a move President Joe Biden took in April to make Pentagon funding available under the Defense Production Act for certain mining activities, including feasibility studies, processes to produce minerals as a byproduct of other commodities, and technical improvements at mine sites (Greenwire, April 19).

Funding under the Defense Production Act — a national defense law passed in response to the Korean War — is supposed to be limited to domestic sources.

However, the White House has adopted an interpretation of military-sharing agreements from the 1950s and 1960s to state Canadian companies are “domestic” sources, opening the door for that country’s mining projects to qualify for U.S. financing under the law.

Advocates for a stronger and more secure U.S. supply chain for electric vehicles say Canada could be a valuable ally in Biden’s mining-for-climate strategy.

Part of the reason for that is a difficult reality: The U.S. may not have the geologic potential to make an electric vehicle battery.

Although companies in the U.S. are trying to mine for key minerals like cobalt, graphite and nickel, studies have yet to confirm economic mineral reserves anywhere in the U.S. for those metals at the appropriate quantities or grades to meet the consumer demands of a lower-carbon future.

“I think it doesn’t really matter so much the difference between doing the primary extraction in Canada versus the U.S.,” said Alex Grant, a lithium mining consultant. “Any competitive tension between Canada and the U.S. is a million times less than any competitive tension with China and Russia, and that’s really what we need to focus on.”

But this examination of money for Canadian mining projects occurs at a time when the U.S. is seeing a decline in interest for new mining projects and some mines have been stalled by Biden administration officials for environmental reasons.

It’s a politically potent recipe for Biden’s critics that could let them argue that he is choosing foreign mines over jobs in his own country.

“I can’t say I’m surprised since Biden has repeatedly indicated he prefers foreign labor mining for minerals instead of Americans, even though he claims to support American mining. Now he wants to use American taxpayer money to build even more wealth abroad, not at home. This is unacceptable,” said Rep. Pete Stauber (R-Minn.) in a statement. Stauber’s congressional district includes the proposed site of Twin Metals, a copper-nickel mining project that has been blocked by the Biden administration.

The White House did not respond to multiple requests for comment.

The U.S. already receives a large quantity of minerals from the Great White North.

According to figures provided to E&E News by Canada’s Department of Natural Resources, more than 40 percent of Canada’s nickel exports are already shipped to the U.S., along with 10 percent of cobalt exports, 50 percent of copper exports, and more than half of its natural and synthetic graphite exports.

Canadian mining industry representatives said they expect interest in their country from the auto sector will be supercharged under the new U.S. climate law due to mineral sourcing requirements in an expanded electric vehicle tax credit for consumers (E&E Daily, Aug. 8).

That’s because Canada still holds a wealth of untapped mineral potential that government officials have invested significant time and money into developing. The Canadian government plans to invest the equivalent of billions in U.S. dollars into a critical minerals strategy, which officials have stated will allow the nation to have a fulsome battery supply chain online by 2025.

“Canada has existing production or reserves of all the critical minerals required to produce advanced batteries for electric vehicles, including nickel, graphite, cobalt, copper and manganese,” said a spokesperson for the Canadian natural resource agency in an email.

General Motors Co. announced in March it would build a new cathode material factory in Quebec. That same month Stellantis disclosed it would build a battery plant in Ontario with LG Energy Solution valued at more than $5 billion. Both companies have also recently decided to build electric vehicle manufacturing plants in Canada.

“Canada has been elevated to the top tier as a potential source,” said Keith Phillips, CEO of lithium mining and processing company Piedmont Lithium, who said the climate law will make Canadian “projects that much more competitive.”

Yesterday, Bloomberg reported Volkswagen and Mercedes-Benz Group have struck a deal with the Canadian government to ensure both companies are able to obtain metals for their electric vehicles, partially due to the U.S. climate law. The car companies are expected to sign the pact with Prime Minister Justin Trudeau and German Chancellor Olaf Scholz as soon as later today.

Companies have also directly invested in Canadian mines. Just hours before Biden signed the climate law, Mitsubishi debuted a deal with mining company Giga Metals Corp. that it would help develop a nickel project in northern British Columbia. Mitsubishi is a global commodity trading company with a prominent line of automobile products.

Giga Metals CEO Mark Jarvis said the announcement was years in the works and unrelated to the U.S. climate law. But he admitted the statute’s mineral sourcing requirements are “going to help big time.”

“They’re all thinking, ‘If [the People’s Republic of China] invade Taiwan, what happens to my supply chain then?’” he said.

The U.S. has recently seen its fair share of battery manufacturing plant announcements. But activity in the mining sector is muted, and automakers have not inked deals with mines, instead primarily opting for nonbinding supply deals conditioned on a mine actually getting its permits and going into production.

Pierre Gratton, president and CEO of the Mining Association of Canada, acknowledged that the Canadian mining sector may benefit more from the climate law and its resulting mineral demand than U.S. mining companies.

“We may get a higher concentration of the mining jobs,” Gratton told E&E News, “but those are only a portion, relatively speaking, of the total jobs that this transformation is going to create.”

“If anything, I would say if I were an American, ‘Thank goodness we have Canada because it’s going to create jobs in the U.S.,’” he continued.

Canadian mining companies are leaping at the potential for U.S. government financing to help supply minerals for electric vehicles across their southern border.

Companies like Nano One Materials Corp., a Canadian cathode powders manufacturer with operations in Quebec, said they are working on building relationships in Washington to vie for U.S. government-backed assistance.

“We do envisage some of that financial support, whether that’s through partners or directly,” said Nano One CEO Dan Blondal.

One way that the Biden administration has signaled a willingness to fund Canadian minerals is through the Defense Production Act.

A report released by the White House dated June of this year stated that Canada is considered a “domestic source” under existing military agreements under the two nations, providing “potential opportunities for collaboration” under the Defense Production Act.

“Canada is a preferred partner of the United States with critical mineral resources and expertise that could be leveraged to expand processing capacity and the manufacturing of intermediate and final goods, further strengthening North American supply chains,” the report stated.

Recently, Canadians in the mining sector received invitations to a September webinar hosted by the U.S. Commercial Service Canada, a division of the U.S. Commerce Department, about “funding opportunities for strategic and critical minerals” under the Defense Production Act.

“The U.S. Commercial Service Canada invites you to participate [in] a webinar event to learn how the Canadian critical minerals industry can qualify for financial grants under Title III of the Defense Production Act. The webinar will inform on how to expand domestic capacity, invest in domestic production, and respond to global shortfalls in the supply chain,” stated an invitation that was obtained by E&E News.

Congress passed $600 million in funding for Defense Production Act activity in an emergency supplemental spending bill responding to the war in Ukraine, and Democrats added another $500 million in authorized spending in their climate law, known as the Inflation Reduction Act (E&E Daily, Aug. 15).

Gratton acknowledged there has “been talk of off-take agreements and the use of patient capital from the United States.”

“There are a lot of understandable reasons why the U.S. government might feel it needs to intervene in order to help develop some parts of our business,” he said.

Jamie Kneen, a mining-focused activist with MiningWatch Canada, was taken aback by the idea of the U.S. considering direct investments in Canadian mining operations.

“I didn’t realize they would go that far in terms of cross-border integration,” he said, voicing concern the funding will put “pressure on regulators to approve projects” and “risks making marginal projects economically viable.”

Neither the Commerce Department nor the Office of the U.S. Trade Representative responded to requests for comment.