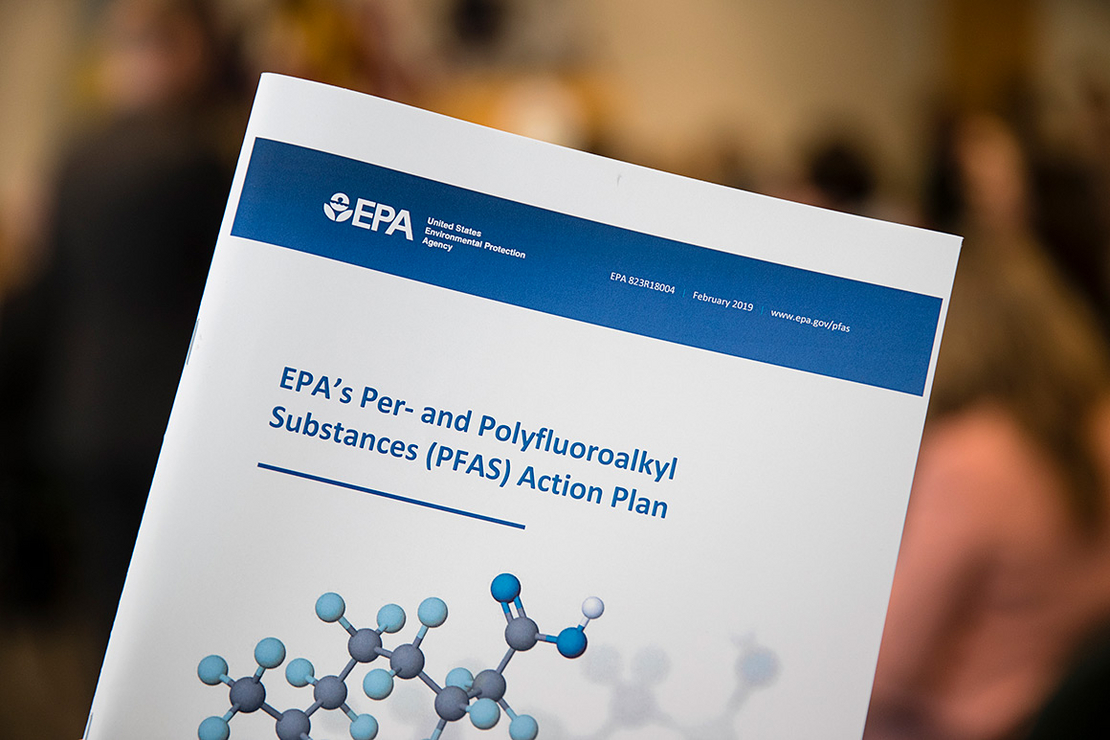 An EPA report is shown ahead of a news conference in Philadelphia in 2019. Today the agency announced a national strategy to deal with PFAS pollution. AP Photo/Matt Rourke

The Biden administration unveiled a sweeping plan to address every form of PFAS pollution today, cracking down on "forever chemicals" linked to diseases including cancer and found in a wide range of everyday products and in thousands of drinking water systems nationwide.

The EPA plan includes timelines for regulating multiple compounds in drinking water, and strategies for preventing more contamination. But it is unlikely to relieve immense pressure on the agency from public health experts and affected communities to quicken the pace of regulation.

The long-awaited vision for tackling the most heated chemical issue facing the Biden administration came with Administrator Michael Regan returning to his home state of North Carolina for the announcement in a speech at North Carolina State University — surrounded by the same local health advocates who pressured him to take action on PFAS when he was the state’s head regulator.

"For far too long, families across America — especially those in underserved communities — have suffered from PFAS in their water, their air or in the land their children play on," Regan said. "This comprehensive, national PFAS strategy will deliver protections to people who are hurting, by advancing bold and concrete actions that address the full life cycle of these chemicals. Let there be no doubt that EPA is listening, we have your back, and we are laser focused on protecting people from pollution and holding polluters accountable."

Moisture-resistant chemicals used in products around the world, per- and polyfluoroalkyl substances have long been prized for their useful properties. There are thousands of compounds, several of which have been repeatedly linked to cancer and other severe health impacts, and they now contaminate the blood of most people on Earth.

And while long-chain PFAS like PFOA and PFOS have largely been phased out of U.S. production, short-chain replacement chemicals like GenX, initially billed as safe by industry, have become health crises in their own right for states like North Carolina (Greenwire, July 21).

The "PFAS Strategic Roadmap" released today reflects how seriously the Biden administration is taking the chemicals. But it does not directly answer the most burning question facing the agency: whether EPA will regulate PFAS together as a class, or take a smaller-scale approach.

Health advocates have pushed for the former option, arguing that because PFAS are so numerous, doing the necessary toxicity and health effects analysis of each individual compound would take too long and allow exposure to toxic chemicals while communities wait for EPA action.

The chemical industry, meanwhile, has suggested EPA regulate multiple PFAS together in "subgroups" that have similar chemical structures or health impacts.

The road map makes clear that EPA will continue with plans to take a more incremental approach, at least for now.

It includes timelines showing EPA will propose limits on two compounds, PFOS and PFOA, in drinking water by fall 2022, and finalize those the next year. It will publish public health advisories for an additional two compounds in drinking water, GenX and PFBS, by the spring. EPA is also proposing to regulate PFOA and PFOS under the Comprehensive Environmental Response, Compensation and Liability Act, or Superfund law. That rule is expected to be finalized by mid-2023.

While regulatory actions would address PFAS individually or in smaller groups, the road map explains key work being conducted by EPA’s Office of Research and Development that could lay the groundwork for future actions banning PFAS as a class or in subgroups.

The office is "working to break the large, diverse class of PFAS into smaller categories based on similarities across defined parameters," including their toxicity and treatment options. That research, in turn, "will help EPA prioritize future actions to research, restrict and remediate PFAS."

Betsy Southerland, a former EPA Office of Water official who has been pushing for class-based regulation since leaving the agency in 2017, said that research is key. She noted that for PFAS to be banned under the Toxic Substances Control Act, the agency must embark on a multiyear process to first prioritize chemicals, then evaluate their risk, before they can be managed or banned. Research to help break up the thousands of PFAS into smaller categories, she said, will help with that first step under TSCA.

"They are taking individual actions on PFAS while they continue to lay the groundwork for a class-based approach," she said.

Others are more concerned.

Kyla Bennett, who directs science policy for the group Public Employees for Environmental Responsibility, offered deeply critical comments about the agency’s emphasis and scope, expressing particular frustration about the lack of a clear class-based approach.

Panning a "whack-a-mole" approach that she said could still see the agency decades from regulating many PFAS, Bennett criticized the road map. "When you get rid of all the flowery language and EPA congratulating itself for all it is doing, you realize that they are only going to set drinking water standards for two PFAS — PFOA and PFOS — in another year, and we still don’t know what the proposed limits are," Bennett said.

The document itself argues that the road map is just a first step, in a paragraph seemingly meant for critics who would push the agency to do more sooner.

"These are not the only actions underway at EPA nor will they be the last. As the agency does more it will learn more. And as EPA learns more it will do more," the road map states. "As EPA continues to build the evidence base, as regulatory work matures, and as EPA learns more from its partnerships across the country, the Agency will deliver additional actions commensurate with the urgency and scale of response that the PFAS problem demands."

EPA also says it will use its authority under TSCA to compel PFAS manufacturers to "conduct and fund" toxicity studies as the agency develops its regulatory approach. The first round of test orders for that effort will come by the end of this year.

Earlier this summer, EPA proposed its first-ever reporting requirements under TSCA to gather data on more than 1,000 PFAS (E&E News PM, June 10). The agency’s chemicals office will continue to play an increasingly meaty role in EPA’s broader crackdown, with prior decisions made through the New Chemicals program on PFAS now under review.

The road map further lays out how EPA will also limit PFAS pollution in wastewater. It promises to "make significant progress" in regulating PFAS discharges into rivers and streams for nine industrial categories under its effluent limitation guidelines by the end of 2024. The agency will also use its authorities under National Pollutant Discharge Elimination System permits to require monitoring for PFAS at facilities where they are expected or suspected to be present.

EPA is also stepping up measures to study the chemicals in fish, including monitoring tissue samples — homing in on an exposure pathway that has drawn more attention in recent months (Greenwire, Aug. 31).

The road map also has significant implications for the waste industry, which has struggled with escalating costs as it grapples with contamination.

EPA will finalize its risk assessment for PFOA and PFOS in biosolids, also known as sewage sludge, by winter 2024, and may regulate those chemicals in that material accordingly.

Landfills are also among key industries that may be subject to a potential rulemaking as EPA studies their PFAS discharges.

In a statement, the American Chemistry Council said it plans to coordinate with its members and work with the agency on addressing PFAS. ACC represents a number of PFAS manufacturers and has been among the most vocal critics of a possible class-based regulatory approach.

The trade group said that alternatives might not be available for some 600 PFAS widely used in items like cellphones and solar panels. Spokesperson Tom Flanagin said the road map "reinforces the differences between these chemistries and that they should not all be grouped together."

EPA isn’t alone. Though the environmental agency is in the spotlight, others also released plans to address PFAS today.

Among the most scrutinized players is the Department of Defense, on the hook for staggering amounts of contamination at military bases, with costs rising rapidly.

DOD said it is conducting PFAS cleanup assessments at nearly 700 installations and National Guard locations where contamination could be present. One of the military’s biggest focuses is the phaseout of PFAS-laden firefighting foam and establishing an adequate replacement.

Meanwhile, the U.S. Department of Agriculture and Food and Drug Administration described their ongoing efforts researching health implications. Those agencies’ roles in handling PFAS were brought to light recently when a pesticide used by Massachusetts to spray for mosquitoes was found to contain high levels of the chemicals. The contamination was later traced back to fluorinated barrels used to transport a range of items (Greenwire, Aug. 6).

Additionally, the Department of Homeland Security and Federal Aviation Administration said they would make addressing the chemicals a priority.

In a statement, the Environmental Working Group praised EPA’s more aggressive steps but criticized other agencies. The organization, which does significant PFAS work, faulted DOD, FDA and FAA "for failing to take meaningful action" on the crisis. EWG also pushed EPA to ramp up its crackdown on PFAS disposal, including banning the incineration of the chemicals.