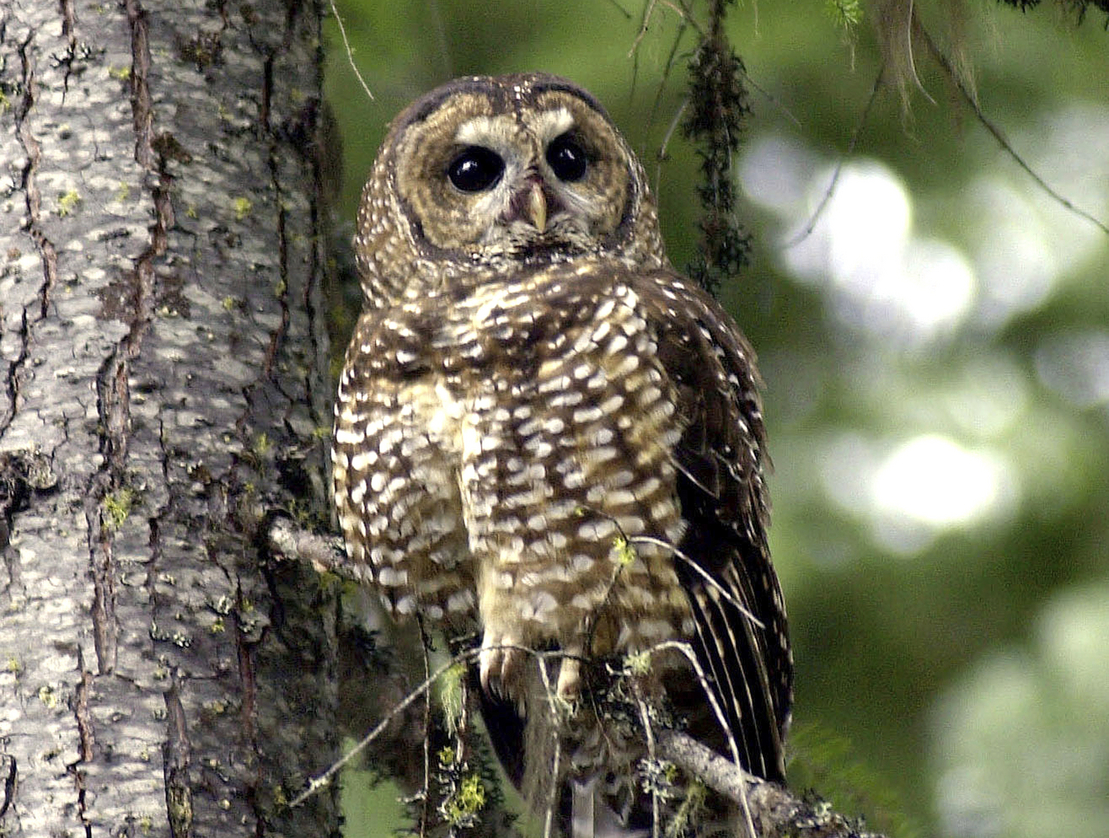 In this May 8, 2003, file photo, a northern spotted owl sits on a tree branch in the Deschutes National Forest near Camp Sherman, Ore. Don Ryan/AP Photo

The Biden administration could be done with its rewrite of Trump-era Endangered Species Act rules by May 2024, an official noted in an update for a federal judge overseeing a crucial legal challenge.

“Since my [earlier estimate] was filed, the Services have been further examining and clarifying an anticipated timeline for a rulemaking to propose revisions to the 2019 rules,” Rauch wrote in the administration’s most recent legal filing.

NOAA Fisheries and the Fish and Wildlife Service are jointly working on the revised ESA rules, which cover complex issues including the designation of critical habitat and different protection levels for threatened as opposed to endangered species.

At the same time, Rauch cautioned in his declaration filed Oct. 14 in the U.S. District Court for the Northern District of California that the “anticipated timeline may need to be lengthened” depending on the judge’s future rulings.

The immediate legal question is not whether the Trump ESA rules will change. The Biden administration has already committed to making changes. Rather, the question is what happens to the Trump rules in the meantime.

In July, U.S. District Judge Jon Tigar sided with the environmentalists and vacated Trump’s ESA rule changes, meaning they would no longer be in effect while the Biden administration undertakes its revisions (E&E News PM, July 5).

“Here, the Services themselves concede that they have substantial concerns with the 2019 ESA Rules, both with respect to certain substantive provisions as well as certain procedures that were utilized in promulgating these regulatory revisions,” Tigar wrote.

An Obama administration appointee, Tigar noted that the agencies’ chief argument was that vacating the rules would cause confusion among the public, other agencies and stakeholders.

“But, as the Services themselves explain many times, leaving the regulations in place will cause equal or greater confusion, given the flaws in the drafting and promulgation of those regulations,” Tigar wrote.

Thirteen conservative-led states, the American Farm Bureau Federation, the American Petroleum Institute and other intervenors then asked the 9th U.S. Circuit Court of Appeals to keep the Trump rules in effect until a final ruling on an appeal.

In a court filing after the judge’s ruling, the conservative states and allied farm and energy organizations declared that vacating the Trump rules at this point, without a ruling on the underlying merits, “is like asking a surgeon to weigh the pros and cons of amputating a gangenous leg without first determining that the leg is infected with gangrene.”

In September, a three-judge appeals court panel ruled that Tigar had “clearly erred in vacating the 2019 rules without ruling on their legal validity.”

One of the Trump administration’s rules covered how FWS and NOAA Fisheries designate listed species’ critical habitat. Another eliminated FWS’s former policy of automatically extending to threatened species the protections against “take” that the law automatically provides for endangered species (Greenwire, Sept. 4, 2020).

A third rule changed how FWS and NOAA Fisheries work with federal agencies to prevent proposed agency actions that could harm listed species or their critical habitat.

The Biden administration agreed last December to redo the three rules in response to a lawsuit filed by Earthjustice on behalf of the Center for Biological Diversity, Defenders of Wildlife, the Sierra Club, the Natural Resources Defense Council, the National Parks Conservation Association, WildEarth Guardians and the Humane Society of the United States.

Earthjustice, which is representing the environmental groups, asked Tigar to amend his July ruling to consider some or all of the merits of the lawsuit.