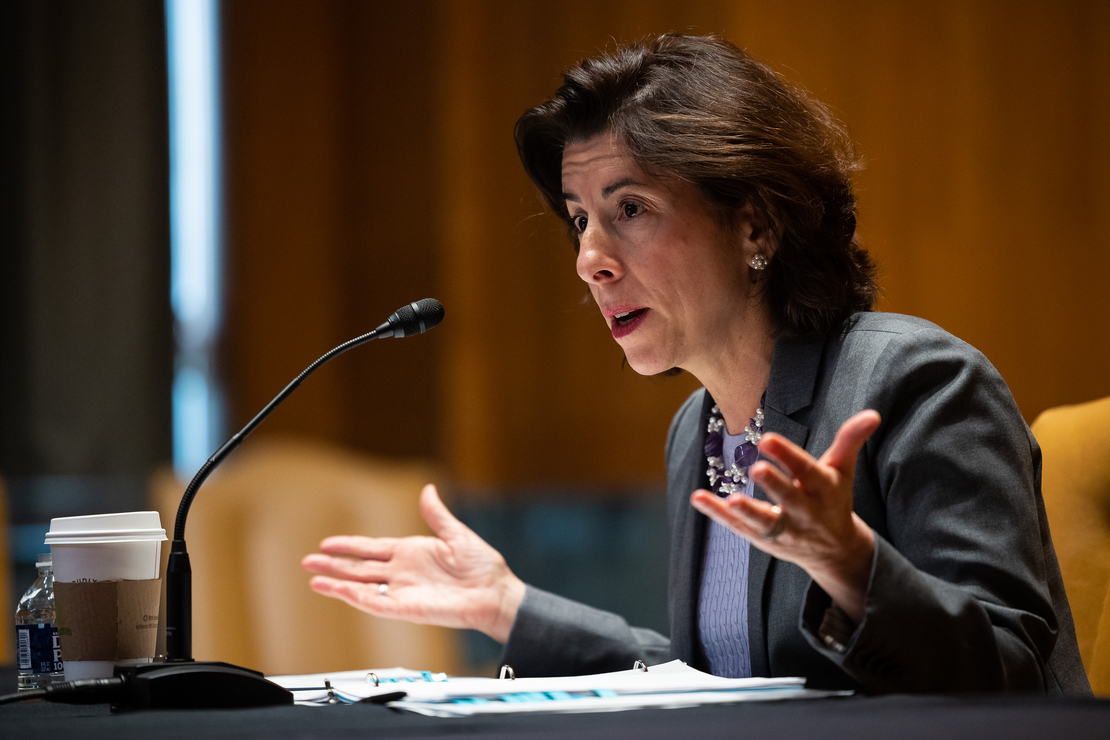 So much so, the Biden administration’s point person on the negotiations said, that the administration is willing to back a slimmer version of the package to ensure that $52 billion to help semiconductor manufacturing passes before chip companies start looking elsewhere for incentives.

“They have to be done before they go home for their summer break,” Raimondo told a gaggle of reporters following the classified briefing.

Raimondo indicated that the urgency of the need to address semiconductors has lawmakers and Biden officials willing to drop the more contentious and ambitious issues of the bill and move only the consensus items to meet the August deadline.

“What I can say is it seems to be talking to senators and talking to members of the House that they’re coalescing around a CHIPS-plus kind of a bill,” Raimondo said. “And if that were to happen, we will be very supportive.”

The message from the administration comes as work on House-Senate conference negotiations reached an impasse this month as Senate Republicans, led by Minority Leader Mitch McConnell (R-Ky.), threatened to derail any potential bipartisan deal should Democrats continue their pursuit of a separate reconciliation package focused on prescription drugs and clean energy.

Republicans later backtracked off the full-throated threat of derailment earlier this week by suggesting the House could simply pass the Senate version of the bill or both chambers could vote to move a measure to fund the semiconducter portion of the bill.

House Democrats, however, are balking at the Republican push and are instead insisting they want a compromise on the legislation that would also provide tens of billions for the Department of Energy and National Science Foundation.

‘We ought to take that’

Some lawmakers emerging from the briefing backed the administration’s new “CHIPS-plus” approach.

“I think we ought to take that and whatever else people can agree on and get it to the floor within the next 10 days,” said Intelligence Chair Mark Warner (D-Va.). “My fear is once these decisions are made, and other countries have put up subsidies to close the gap, they’re not going to reverse those decisions.”

Intel and other chip makers have warned lawmakers that further delays in the bill’s passage could jeopardize planned facilities in the United States as other countries like Germany and France, along with China and Taiwan, offer more incentives to attract the companies to site their manufacturing facilities in their borders.

Cross-chamber work to achieve that consensus would need to go into overtime to match that timeline.

House Majority Leader Steny Hoyer (D-Md.) yesterday accused McConnell of taking the innovation bill “hostage” to try to derail the Democrats’ separate climate and social spending legislation. He called the approach by McConnell an “arrogant and unreasonable demand” and said it’s not how a democracy operates.

“I think we can get a deal,” said Hoyer, adding that lawmakers were close to a bicameral accord until McConnell “broke off negotiations” last week. He rejected McConnell’s idea that the House simply pass the Senate version of the bill. “You might as well eliminate the House,” he said.

Hoyer did not directly address splitting off the semiconductor portion of the bill. He did say, however, that a CHIPS deal is needed before Congress leaves for August, otherwise manufacturers will continue to face a shortage of semiconductors needed for a range of products.

Hoyer suggested car manufacturers now have thousands of vehicles sitting in parking lots waiting for semiconductor components before they can be sold.

Rep. Dan Kildee (D-Mich.), chief deputy whip, said it’s a “good question” whether there would be support among House Democrats for passing a stand-alone CHIPS funding bill and then conferencing the remaining issues in separate legislation.

“We’re going to get CHIPS done,” said Kildee, whose district includes a General Motors plant reliant on semiconductors. But, he said, “we also have to deal with the other pieces that haven’t been completed.”