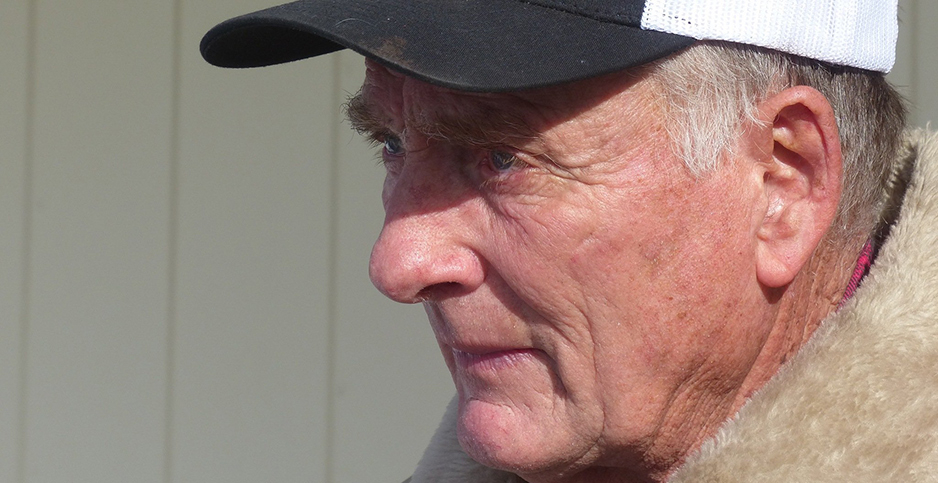 Rancher Dwight Hammond Jr. greeted protesters outside his Burns, Ore., home in this Jan. 2, 2016, file photo. On Friday, the Interior Department pulled grazing permits granted to Hammond and his son in the last days of the Trump administration. Les Zaitz/The Oregonian/Associated Press

Laura Daniel-Davis, Interior’s principal deputy assistant secretary for land and minerals management, wrote in a single-page letter that the Bureau of Land Management had failed to execute a 15-day protest period before it issued the new permits to father-and-son ranchers Dwight and Steven Hammond earlier this year (Greenwire, Jan. 20).

"Because the protest period had not properly concluded before the January 19 Decision was issued, I am rescinding the January 19 Decision and remanding the matter to the BLM to allow for full consideration of the timely protests received by the BLM," Daniel-Davis wrote. "This is not a final determination of any matter at issue in the Notice of Final Decision."

The decision came on the heels of a legal challenge from several environmental groups, which argued that Interior failed to allow adequate public participation, a violation of the Federal Land Policy and Management Act (Greenwire, Feb. 26).

Daniel-Davis did not indicate when BLM will issue a new ruling on the permits, which cover nearly 26,000 acres of public lands across four allotments in western Oregon.

A BLM spokesperson declined to comment on when the review is expected to be completed.

The Hammonds, who have long feuded with federal land managers over public acreage adjacent to their Burns, Ore., ranch, gained national attention in 2016 following protests over their incarceration (Greenwire, Jan. 5, 2016).

Both father and son were sentenced to relatively short terms after being convicted in 2012 of using fire to maliciously damage U.S. property, but federal prosecutors appealed and successfully argued that those terms failed to meet a five-year mandatory minimum requirement.

That action resulted in the Hammonds’ being released and then returned to federal prison.

Critics of that decision, including anti-government activists Ryan and Ammon Bundy, staged a rally in Burns, Ore., in support of the Hammonds in 2016. That gathering sparked the 41-day occupation of nearby Malheur National Wildlife Refuge.

But it was Protect the Harvest, a nonprofit group that works in defense of agriculture and hunting issues, that would ultimately win the Hammonds’ release.

The group championed the Oregon ranchers and persuaded President Trump to pardon both Hammonds in 2018, triggering their release from federal prison (Greenwire, July 10, 2018).

Once freed, the ranchers sought new grazing permits from the Trump administration. BLM had refused to renew their previous 10-year contracts in 2014, ending the family’s ability to use public lands for about 900 permitted cattle.

Following a second review by Interior, which cited the Hammond Ranches’ "extensive historic use of these allotments" as well as "past proper use of rangeland resources, a high level of general need, and advantages conferred by topography," Bernhardt once again issued new 10-year permits in January (Greenwire, Jan. 5).

At the time, Idaho-based attorney Alan Schroeder, who represents the Hammonds, praised the decision for ensuring continued operation of the ranch, which has functioned on a mix of private and public lands since 1964.

"The fact it’s been restored will certainly stabilize this livestock operation that’s been around for 50 years," Schroeder said.

Schroeder today declined to respond to questions about whether the Hammonds could file a legal challenge to Interior’s decision, referring questions to the Oregon Farm Bureau.

That organization posted a statement to its website criticizing the rollback as "fundamentally unfair" and the result of "ever-changing regulatory whims."

"The Hammond family are long-standing pillars of the Harney County community who have been subjected to continued government overreach while sustainably managing their ranch for the benefit of the local community, local ecosystems, and generations of their family," the statement read.

But another supporter of the Hammonds, anti-government activist Jon Ritzheimer, suggested on Facebook that the decision could spark a "round 2" of protests.

Ritzheimer, a former Marine who pleaded guilty to charges stemming from his role in the Malheur occupation, made the remark on his Facebook account under a link to a news account of the decision (Greenwire, Dec. 5, 2017).

"Wow. Can we just kick it off already?" Ritzheimer wrote.

But environmentalists who had challenged both Trump administration attempts to return the Hammonds to public lands praised the decision to pull the permits for further review.

"We’re grateful that the new administration saw right away that Bernhardt’s decision to grant the grazing permit without the proper public participation could not stand," Western Watersheds Project Deputy Director Greta Anderson said in a statement. "We believe when they reconsider the proposed action, they’ll realize there were major substantive problems as well."