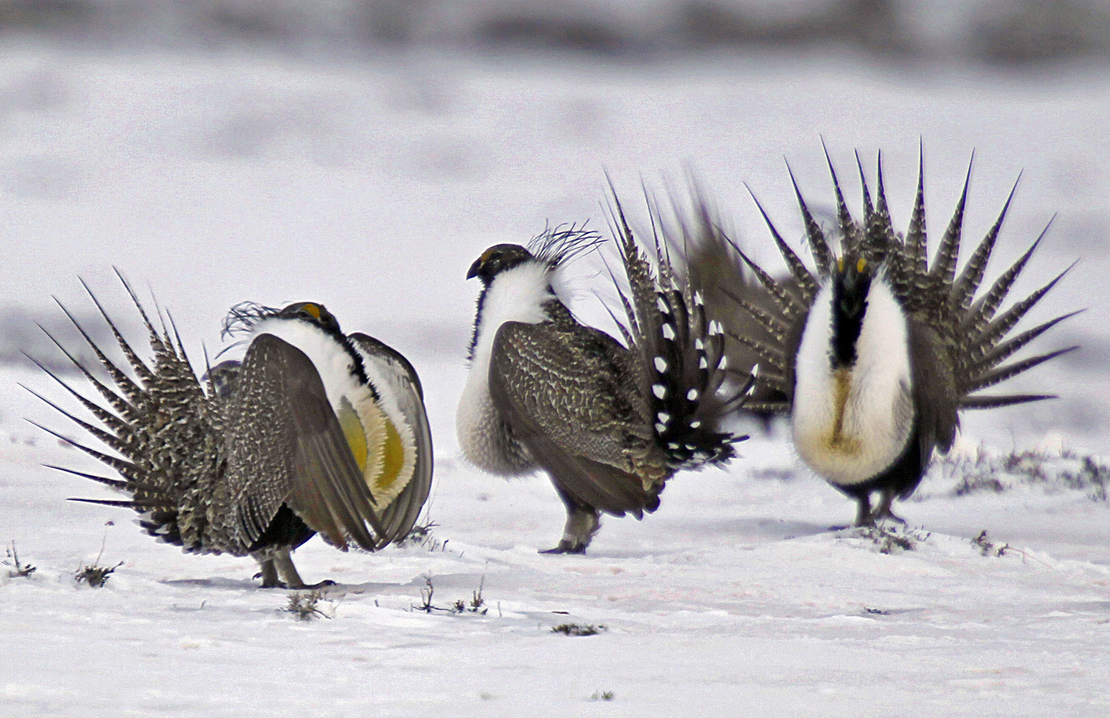 The Bureau of Land Management is hoping the third time’s the charm on a federal blueprint designed to save the greater sage grouse and its dwindling sagebrush habitat.

The bird famous for its elaborate spring mating ritual is struggling across much of its range, despite decades of different efforts by federal and state regulators to help the species increasingly threatened by drought and wildfires (Greenwire, May 9, 2022).

BLM is working to complete a revised management plan for the nearly 70 million acres of habitat the agency oversees across the West, first adopted in 2015 under the Obama administration and amended in 2019 by the Interior Department under former President Donald Trump.

The bureau, which has reviewed more than 300 peer-reviewed studies that have been published since 2015, is considering major changes, including possibly redesignating some core sage grouse territory into “areas of critical environmental concern,” which would add new restrictions on everything from energy development to recreational activities across potentially hundreds of thousands of acres.

Other possible revisions could include stronger enforcement of seasonal restrictions on land use activities, such as curbing oil and gas drilling during sage grouse mating or brood rearing seasons and larger buffers around breeding grounds. These moves also could end up restricting where new wind and solar farms are sited, setting up a potential conflict with Biden administration efforts to expand commercial-scale renewable energy development on federal lands.

BLM could also decide to leave in place some of the Trump-era revisions, such as waivers and exemptions from some of the buffer requirements and seasonal restrictions in the original 2015 blueprint.

“Like everything the Biden administration is recycling from the Obama administration, we have very low expectations,” said Kathleen Sgamma, president of the Denver-based Western Energy Alliance.

Also watching closely are conservation groups that have pushed for stronger sage grouse management, even after the 2015 plans were adopted. They are hopeful BLM will adopt modifications that address growing threats to the bird from climate change and the associated risks of wildfires and drought conditions.

“A major focus of the BLM in the upcoming process should be to look back at what was missing or went wrong with the 2015 plans and why they have failed to stem the declines in both sage grouse numbers and habitat,” said Josh Osher, the public policy director at the Western Watersheds Project.

BLM is still months away from completing the environmental impact statement it began in November 2021 and the associated amendments to dozens of resource management plans.

Though originally slated for 2022, the bureau said in an emailed statement it is now “targeting the summer of 2023 for releasing our greater sage-grouse draft environmental impact statement and proposed resource management plan amendments.”

The sage grouse management blueprint approved by the Obama administration in September 2015 required years of close coordination and work with state leaders and other stakeholders, including the oil and gas, mining, and ranching industries.

Even after all the coordination and effort, the original plans drew fierce backlash from some Republican governors and congressional leaders who warned they could cripple Western economies. A coalition of environmental groups also sued, claiming they weren’t strong enough.

The Fish and Wildlife Service, however, determined in 2015 that the plans, if implemented, would provide enough protections for the grouse that it wasn’t necessary to list the iconic Western bird as endangered or threatened under the Endangered Species Act.

The 2015 plans, which remain in place today, were amended by the Trump administration four years later. Those changes included reducing buffers around leks and softening no-surface-occupancy requirements.

While a federal court in 2019 blocked BLM from implementing the Trump-era revisions, they were strongly supported by Western governors, including Democratic Colorado Gov. Jared Polis and Republican Wyoming Gov. Mark Gordon.

BLM has said little since the public scoping period for the EIS was completed in February 2022.

But it has dropped clues as to what may be included in the draft revisions when they are unveiled for public review this summer.

The bureau has acknowledged it’s evaluating a strategy that would allow BLM to quickly change management criteria and land use stipulations due to sudden changes in rangeland conditions, such as wildfires. U.S. Geological Survey research has shown that millions of acres of sage grouse habitat has been lost to wildfires over the past two decades.

BLM has also said it is studying the current boundaries of “priority habitat management areas” in the 2015 plans to see if they should be altered.

It’s also possible BLM could add or subtract sage grouse habitat designations based on the bureau’s review of the new studies and data collected since 2015, Pat Deibert, a Fish and Wildlife Service biologist on detail as BLM’s acting national sage grouse coordinator, said during a January 2022 online public scoping hearing, according to a BLM transcript.

‘Tweaking around the edges won’t cut it’

Greater sage grouse populations have been in decline for at least the last six years, the result mostly of lost habitat due to the combination of severe drought, catastrophic wildfires and the spread of invasive plant species like cheatgrass that can overwhelm the sagebrush ecosystem the bird depends on for survival.

Surveys in 2021 found that things were particularly bad for the sage grouse in parts of California, Colorado, Nevada, Oregon and Utah, where populations had dropped in some cases dramatically, according to federal and state monitoring data.

One bright spot was that preliminary population numbers for spring 2022 appeared to improve slightly, with most states reporting small gains or populations at least holding steady. That includes Wyoming, home to nearly half the remaining grouse population, which saw male attendance at leks in the spring increase 6 percent over 2021, according to the state Game and Fish Department.

The unsteady population numbers over the past six years have some concerned that the FWS could decide the grouse need protection under the Endangered Species Act.

Republicans in Congress, however, were able to place a rider inside the fiscal 2023 omnibus spending package approved last month that prevents the Interior secretary from using any appropriated funding to write a rule listing the grouse for protection (E&E News PM, Dec. 20, 2022).

But that does not remove the need to strengthen grouse protection measures, environmental groups say.

“If there is any hope to conserve greater sage grouse and the Sagebrush Sea ecosystem that supports hundreds of wildlife species, we need a bold paradigm shift in this next round of greater sage grouse plan revisions. Tweaking around the edges won’t cut it,” said Randi Spivak, public lands program director for the Center for Biological Diversity.

“The science tells us that we need stronger conservation now if we are to curtail ongoing habitat loss and get to a place where the sagebrush sea is ecologically sustainable and can support stable populations of grouse and other sagebrush-dependent wildlife,” Smith said.

The oil and gas industry has historically chafed at some of BLM’s sage grouse regulations. But with the Biden administration’s emphasis on shifting the energy sector to combat climate change, including on federal lands, the stage could be set for a new conflict.

This could include the many proposals BLM is considering for wind, solar and geothermal energy development, as well as mining projects aimed at digging up minerals used in the manufacture of renewable technology and electric vehicles.

The Biden administration is working to meet a goal of permitting 25,000 megawatts of renewable energy on federal lands by 2025.

Deibert, the sage grouse coordinator, said during an online public scoping hearing last year that BLM will be reviewing mining activity and “looking at the leasing and development of renewable energy resources in greater sage grouse and sagebrush habitats, including the associated transmission lines.”

That leaves open the question of whether there will be new restrictions on the siting of commercial-scale renewable projects that are in and around grouse habitat.

Chris Greissing, president of the Industrial Minerals Association of North America, wrote in public scoping comments submitted to BLM in February 2022 that the notice of intent to prepare an EIS and amendments to the resource management plans asked the public for comments on “development of mineral resources” in grouse habitat and “how to consider the use of waivers, exceptions, and modifications as related to development of mineral resources” at these sites.

“The mention of the use of waivers, exceptions, and modifications implies that the BLM intends to restrict and/or prohibit mineral resource extraction in any sagebrush or [sage grouse] areas based on the prejudicial —and patently false — assumption that such development cannot coexist alongside the sage grouse,” Greissing wrote.

As for renewable energy, he wrote the notice of intent makes no mention of the potential need for waivers, exceptions and modifications.

“This suggests that the BLM does not plan to regulate or restrict renewable energy projects in [sage grouse] or sagebrush habitat to the same extent it will for mineral resource projects,” Greissing wrote.

He added, “The implication from the Notice of Intent that mineral resources are an inherent threat to [sage grouse] populations or habitat, but that renewable energy development will have no disturbance or effect is illogical and flawed.”

BLM is addressing concerns about the placement of renewable energy projects. It announced last month that it is beginning a programmatic environmental impact statement to update, and potentially expand, the 2012 Western Solar Plan that analyzed millions of acres in Arizona, California, Colorado, Nevada, New Mexico and Utah and established 17 solar energy zones in those states where commercial-scale solar development was deemed suitable (Greenwire, Dec. 6, 2022).

The goal is to identify new areas where renewable energy resources are high but natural resource conflicts, such as greater sage grouse habitat, are low.

Battle lines have already been drawn on the issues of livestock grazing and the excess number of wild horses and burros on federal rangelands, including in sage grouse habitat.

There are millions of cattle and sheep grazing across 150 million acres of federal lands in the West, compared with 82,384 wild horses and burros on 27 million acres.

But the impacts of wild horses trampling sage grouse habitat on federal rangelands are being evaluated by BLM and have sparked calls to action from a number of government and industry leaders who submitted formal public scoping comments last year to BLM on the planned revisions.

The 82,384 wild horses and burros are more than three times the maximum number of animals the bureau says the rangelands can sustain without causing damage to vegetation, soils and other resources.

Gordon, the Wyoming governor, wrote in formal comments to BLM last year that he expects the issue of wild horses to be addressed in any sage grouse regulatory updates.

That view was echoed in formal public scoping comments submitted to BLM last year by the Wyoming Farm Bureau Federation and the Associated Governments of Northwest Colorado, which includes much of the state’s sage grouse population.

Deibert acknowledged during an online hearing last year that management “of livestock grazing and wild horse and burro populations” is an important element that BLM plans to address in the revised plans.

The study of federal herd management areas in Nevada and northeast California estimated that 70 percent of grouse populations within the study area could be lost within 15 years unless wild horse herd sizes on federal rangelands are reduced.

But focusing on wild horses irks some conservation groups.

Public Employees for Environmental Responsibility released a report of its own accusing the USGS of overstating the harm caused by wild horses to greater sage grouse habitat, while overlooking the fact there are many more cows and sheep grazing on federal rangelands (E&E News PM, Sept. 20, 2021).

Requiring that grazing allotments meet federal land health standards “is completely within the control of federal land management agencies” and should be part of the revised grouse regulation measures, she said.

Correction: Based off a Bureau of Land Management hearing transcript the agency says was incorrect, the original version of this story incorrectly stated that BLM was looking at adding sage grouse habitat designations in Texas.