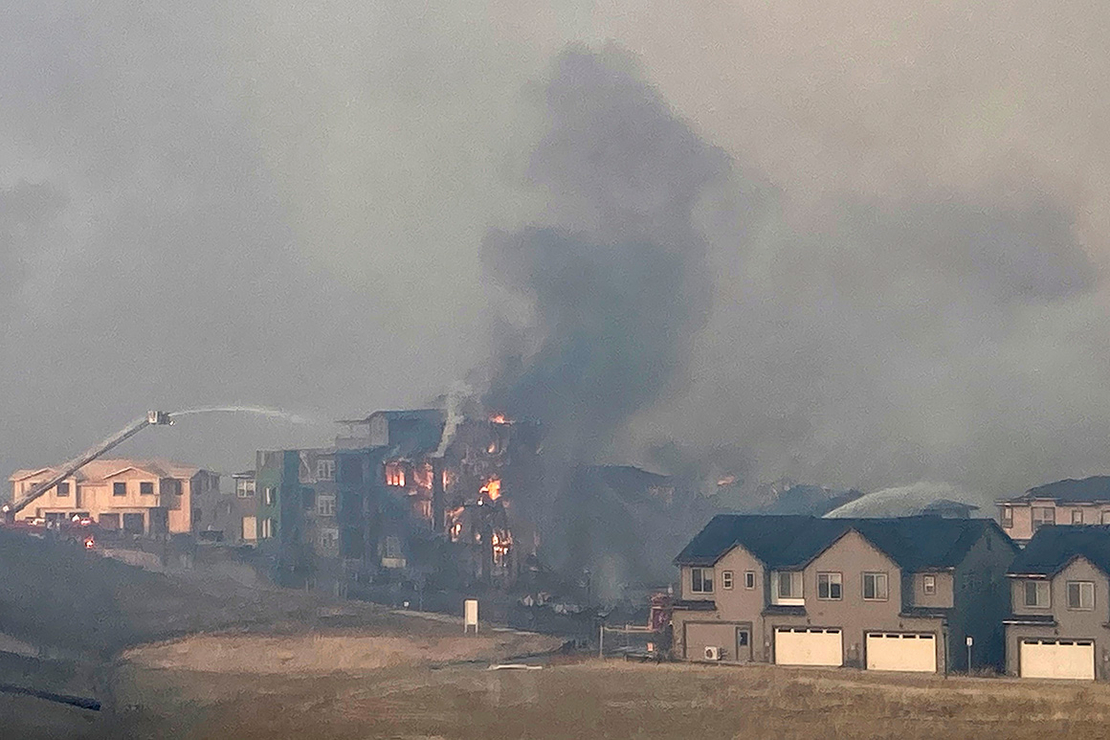 Firefighters spray water on a structure fire as a wildfire burns on Dec. 30, 2021, in Superior, Colo. Biden administration officials today said money from the bipartisan infrastructure deal will help communities respond to wildfires and other natural disasters. David Zelio/AP Photo

Top Biden administration officials today kicked off a whistle-stop tour of 30 rural communities across the nation, promoting more than $14.6 billion in investments from the bipartisan infrastructure deal as the White House looks to shore up support heading into the 2022 midterm election cycle.

White House infrastructure czar Mitch Landrieu promoted the effort in a press call this morning, touting funding to respond to natural disasters including drought and wildfires, as well as funds to promote conservation and outdoor recreation.

“We’ll have Cabinet and senior officials in over 30 communities over the next several weeks, just this week, but we’ll have folks in Colorado, Alaska, Iowa, Indiana, Arizona, Pennsylvania, West Virginia, Washington and Nevada,” Landrieu said, noting the group will include Transportation Secretary Pete Buttigieg, Energy Secretary Jennifer Granholm and Interior Secretary Deb Haaland.

The White House also launched what it calls a “Rural Playbook,” detailing 375 programs included in the infrastructure deal in an effort to ease funding to “small and rural communities” that lack dedicated staff to pursue those monies.

But the tour comes amidst a new wave of coronavirus infections among top Democratic officials, which has sidelined Agriculture Secretary Tom Vilsack, among others.

But Vilsack touted the infrastructure funding from Iowa, where he is currently under quarantine: “It’s going to basically send a very strong message to rural Americans that they’re not being left out of this historic bill. In fact, investments are being made to reflect the value and importance of rural places and people.”

Vilsack, who canceled a schedule appearance in Boulder, Colo., later today alongside Haaland, also praised the inclusion of $5.5 billion to treat forest lands in an effort to tamp down wildfire risk.

“That will provide an opportunity for folks to protect their communities and their homes and their lives and to also make sure that our firefighters are not having to deal with the risk and the tremendous danger of these catastrophic wildfires,” he added.

Haaland, who spoke on the same press call, announced a new $1 billion program aimed at boosting the administration’s conservation pledge, known as America the Beautiful.

That program — more commonly known as 30 by 30 — aims to set aside 30 percent of the nation’s lands and waters in a natural state over the next decade.

The America the Beautiful challenge will combine $440 million in taxpayer funds with private and nonprofit contributions to bolster conservation programs over a five-year period.

Those funds include $375 million directed by Interior for “ecosystem restoration,” along with $35 million from Forest Service for water quality and fish passage restoration, as well as invasive species detection prevention and eradication.

The Defense Department will oversee $25 million via its “Readiness and Environmental Protection Integration Program,” and the Natural Resources Conservation Service will also offer $5 million in grants for private land conservation projects.

The public-private grant program will be overseen by the National Fish and Wildlife Foundation, with a focus on projects that address “watershed restoration, resilience, equitable access, workforce development, corridors and connectivity and collaborative conservation,” according to a White House announcement. Local governments, states, tribes and nonprofit groups can apply for the funding.

Haaland said requests for proposals will be announced next month, with the first round of funding expected in November.