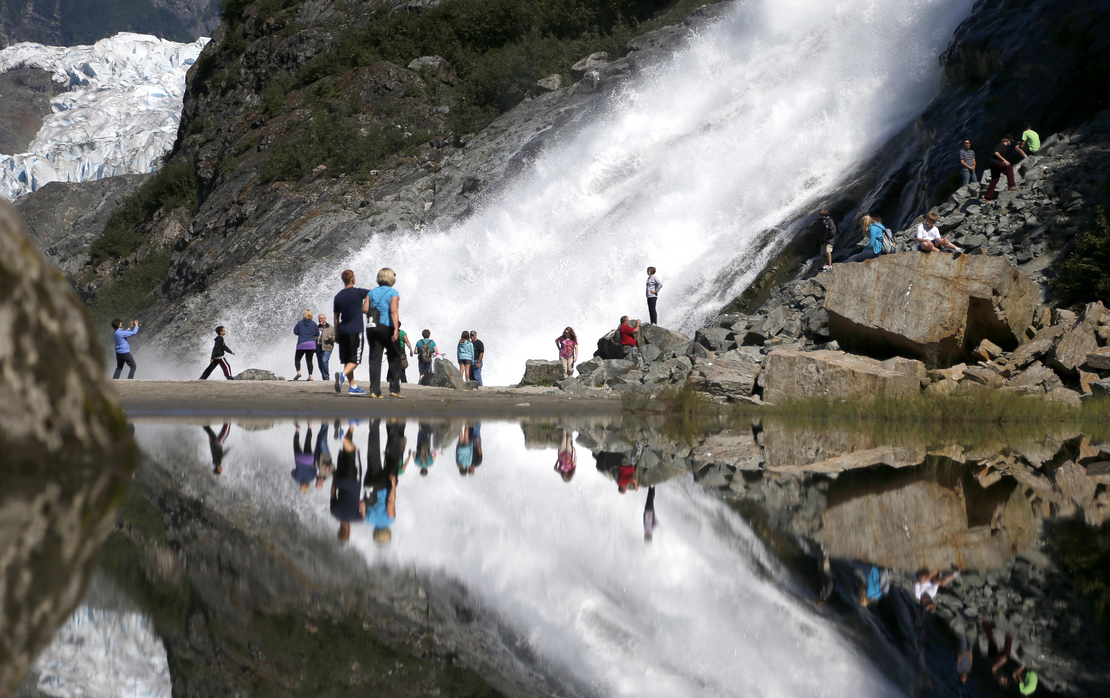 Tourists visiting the Mendenhall Glacier in the Tongass National Forest are reflected in a pool of water as they make their way to Nugget Falls in Juneau, Alaska, on July 31, 2013. Charles Rex Arbogast/AP Photo

The Biden administration Wednesday took its final step toward restoring roadless-area limits on timber and other development in Alaska’s Tongass National Forest.

The Department of Agriculture said it’s finalizing a proposal to once again put 9.3 million acres of the southeast Alaska forest off-limits to commercial logging and other development that requires the construction of roads, although exceptions are possible in certain situations. The forest totals nearly 17 million acres.

“As our nation’s largest national forest and the largest intact temperate rainforest in the world, the Tongass National Forest is key to conserving biodiversity and addressing the climate crisis,” said Agriculture Secretary Tom Vilsack in a news release announcing the move. “Restoring roadless protections listens to the voices of Tribal Nations and the people of Southeast Alaska while recognizing the importance of fishing and tourism to the region’s economy.”

President Joe Biden had signaled since his election that he’d look to reverse Trump’s moves on the Tongass. With its emphasis on carbon sequestration and climate change, the new administration determined the huge Alaska forest is a compelling symbol of a more restrained approach to cutting established forests on federal land (Greenwire, Nov. 19, 2021).

Reaction fell along the usual lines, with environmental groups praising the move and timber interests warning that it could undermine what’s left of Alaska’s wood products industry.

“The Tongass has long been subject to the political pendulum — which neither facilitates active forest management or allows utilization of the community-led planning processes Congress intended,” said Tessa Axelson, the executive director of the Alaska Forest Association. “Further, it undermines the years of work, analysis, and input by Forest Service personnel here in Southeast Alaska.”

Environmental groups said the move reflects the realization that timber production is fading as the economic engine of the region, replaced by commercial fishing and other industries.

“This is great news for the forest, the salmon, the wildlife, and the people who depend on intact ecosystems to support their ways of life and livelihoods,” said Kate Glover, a lawyer with Earthjustice.

The administration said a formal notice will be published Friday in the Federal Register.