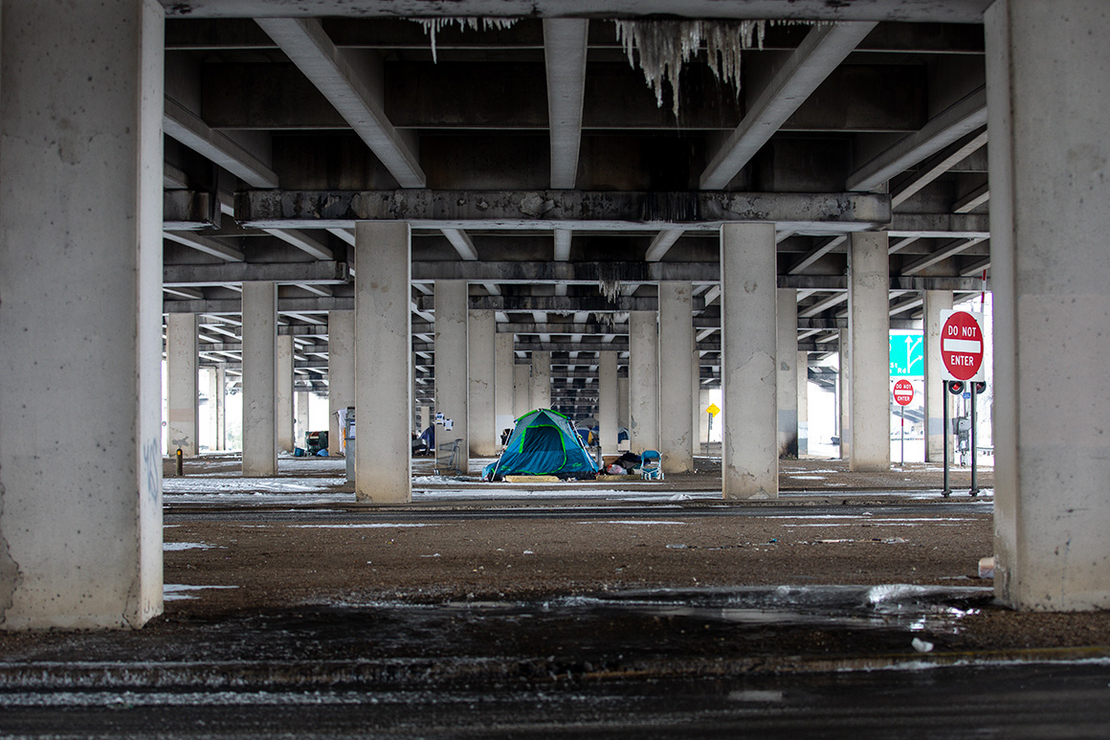 Icicles hang near a homeless shelter under Interstate 35 in Austin, Texas. Democratic lawmakers want to spend billions of dollars to undo the damage that past highway construction has wrought on low-income and minority communities, including those around I-35. Montinique Monroe/Getty Images

As the country’s sprawling interstate highway system took shape in the 1960s, its planners routed freeways directly — and often intentionally — through communities of color and low-income neighborhoods.

While many fought to preserve their communities, local opposition was no match for the government’s power of eminent domain. Neighborhoods were split, residents displaced, and economies splintered.

For the first time, the federal government is investing money to demolish freeways and rebuild streets, parks and other infrastructure destroyed by legacy highway construction.

While the $1 billion designated for the program, which the Transportation Department will oversee, is a far cry from the president’s original $20 billion proposal, advocates see it as important seed money to get the ball rolling.

But without the second prong of Biden’s plan to remake the economy — the embattled "Build Back Better Act" — there is no guarantee that the communities still living in the shadow of these highways will be the ones to benefit from their removal. Neighborhood revitalization could lead to gentrification, for example, and price residents out of their homes.

It would require grant funding be used for projects that have a demonstrated plan for employing local residents, among other provisions. The fate of the $1.7 trillion reconciliation bill could be decided this week (E&E Daily, Dec. 6).

The program’s funding will be dispersed by the Transportation Department through a competitive grant process. Of the $1 billion provided in the infrastructure package, $750 million is designated for capital construction projects and $250 million will go toward community engagement, capacity building and planning studies. Grants will be awarded based on feasibility and potential benefits to the surrounding community.

Advocates, including the administration, view highway removal as a way for cities and states to both disrupt systemic racism and combat the impacts of climate change.

Highly concentrated urban areas that lack greenery can become hubs of higher temperatures, contributing to at least 600 heat-related deaths every year, according to the Centers for Disease Control and Prevention. And a warming planet is only exacerbating the problem. Transportation is the largest source of greenhouse gas emissions in the country.

Federal funding for these projects comes at a pivotal moment. Mid-20th-century highways are reaching the end of their life span, and cities across the country are deciding whether it makes more sense to remove freeways or to fortify and expand them.

To date, nearly 20 cities in the United States have either transformed or are slated to transform their highways into pedestrian-friendly boulevards that provide social, economic or environmental benefits to the surrounding community, according to a report by Congress for the New Urbanism (CNU), which tracks highway removal projects.

In Chattanooga, Tenn., for example, the four-lane, industrial Riverfront Parkway that runs along the city’s river was removed in the early 2000s and converted into a boulevard with waterfront amenities and green space.

A similar project was completed in 2018 that removed 2 miles of the Robert Moses State Parkway in New York that had cut off the city of Niagara Falls from the Niagara Gorge for 50 years. The removal project is also helping restore the natural ecology of the Gorge rim.

Ben Crowther, a transportation program manager with CNU, said federal funding for capital construction could help get shovel-ready projects across the finish line.

The Michigan Department of Transportation, for example, has completed a study and approved a plan to remove Interstate 375 from downtown Detroit, but it is waiting for funding to begin construction. Similarly, Massachusetts has approved a plan to remove a six-lane expressway that slices through East Somerville, and a 1.4-mile stretch of Interstate 81 in Syracuse, N.Y., is also slated for demolition.

“The state DOTs in those respective areas have yet to allocate money to the projects,” Crowther said. “That means they’re waiting on federal funding.”

Of the $250 million for planning grants, no one project can receive more than $2 million. Community groups and nonprofits, not just municipal bodies, are eligible to receive planning grants.

“So we’re looking at 125, at minimum, planning studies that go forward to look at removing highways,” Crowther said.

“So how I see this playing out is that there’s a great amount of interest in these planning grants, and when the program comes up for reauthorization in five years, A) demand has been demonstrated, and B) all of these different cities and communities have done planning grants, so they’re ready to move on to that next step of capital construction.”

For many project proposals, receiving federal planning dollars — as opposed to construction dollars — makes sense. In Seattle, for example, community activists have been working on a project to cap a section of Interstate 5 as a way to reconnect downtown neighborhoods.

“But it hasn’t been officially adopted as a project by the city of Seattle,” said Scott Bonjukian, a volunteer with Lid I-5, the advocacy group working to build momentum for the project.

“Once the design gets a little more finalized, then the construction funding would come into play, but that’s still probably, I would say, at least five or more years away,” Bonjukian added.

For projects that are further along, some cities and states have baked in equity measures to ensure that the benefits of removing highways flow back into the community. In Rochester, N.Y., for example, the city removed its Inner Loop in 2017 and replaced it with a boulevard and more than 500 housing units, half of which are subsidized or below market rate.

In Washington, a highway bridge across the Anacostia River was decommissioned and slated to be turned into a high-line-style park. The surrounding residents, worried they would be priced out of their homes, came together and formed a community land trust, which stops properties from being sold to real estate developers looking to turn a profit.

While other cities have taken similar, protective steps, Crowther said provisions in Biden’s social spending bill are essential for standardizing the practice.

“The intent of the program is reparative; it’s to help the communities that have been affected by highway building,” he said. “So it’s going to take a lot of political willpower, a lot of conversations at the local level, to get that done.”

Beth Osborne, director of Transportation for America, said a lack of political willpower in state governments is part of the larger problem. While she is enthusiastic about the model of reconnecting divided communities, she said creating a small pot of money without addressing how states use their larger share of federal funds is inadequate.

“It’s not enough just to look at a new program, especially such a grossly underfunded program, to fix 70 years of problems if we are still digging the hole deeper with much bigger programs,” she said.

“If states use [federal funding] the way they’ve used it in the past, and for the sorts of projects we’ve heard about in many states, including I-35 in Texas, then that could be creating new or additional divisions while we’re trying to reconnect communities.”

Interstate 35 in Austin, Texas, was built in 1962 and has become a symbol of wealth inequality in the Lone Star State’s capital. It cuts off communities of color in east Austin from the wealthier downtown neighborhood — a disparity nationally highlighted during the devastating power outages that swept through Texas this year (Energywire, Feb. 23).

Despite momentum from community groups in Austin to remove or cap I-35, the Transportation Department has proposed a massive expansion of up to 20 lanes.

“So it’s an uphill battle, and the White House did not recalibrate the balance with this bill,” Osborne said.