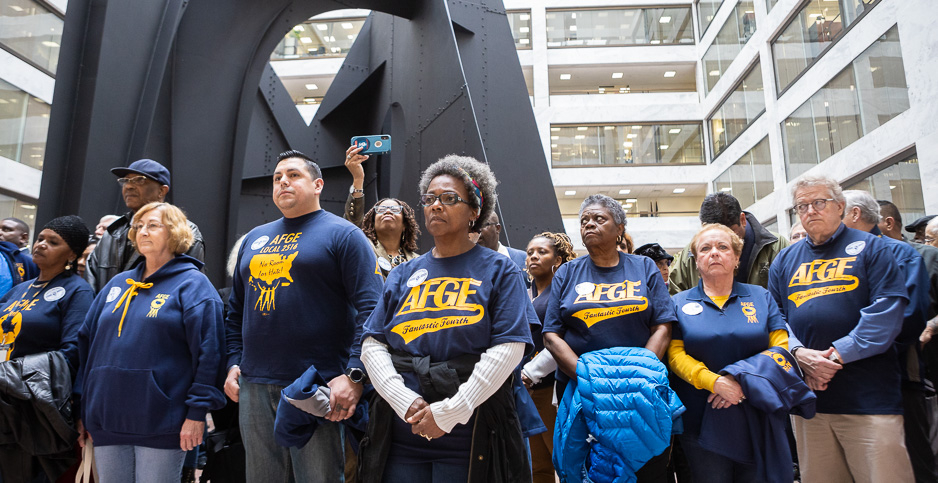 Workers affiliated with the American Federation of Government Employees at a silent protest on Capitol Hill in February 2020. Francis Chung/E&E News

The Biden administration is encouraging agencies to reengage with federal worker unions.

On Friday, the Office of Personnel Management released new guidance related to President Biden’s executive order on the federal workforce, which revoked a trio of orders by former President Trump that had restricted union rights. The memo, quoting Biden’s order, says career employees are "the backbone" of the federal workforce, and it’s "the policy of the United States to encourage union organizing and collective bargaining."

Those rescinded Trump orders limited collective bargaining, targeted "official time" — or the use of work hours for union activities — and made it easier to fire career staff. The prior administration also used those orders to negotiate new contracts with unions within agencies that often tamped down on their rights.

But the OPM guidance could change those contracts yet again.

Agencies are told to stop any action being done under the revoked orders. In addition, they are told to "engage impacted unions" and as soon as practicable "suspend, revise or rescind" actions covered by provisions in collective bargaining agreements affected by the rescinded orders.

Several agencies during the Trump administration sought to impose tough new contracts on their unions, which were often met with protests and litigation.

AFGE pushed for new negotiations and was able to bargain for a new contract with EPA that made some gains on telework, workers’ health and safety, and use of agency equipment. That new agreement became effective last summer.

The union applauded the Biden administration on the new guidance.

"Today’s action by OPM is an important step toward restoring federal workers’ union rights across the government and enforcing President Biden’s order rolling back the illegal union-busting executive orders issued by the previous president," said AFGE President Everett Kelley in a statement Friday.

He also pushed for new contract negotiations at agencies that had bargained using the prior administration’s orders.

"This guidance confirms that all agencies must implement President Biden’s order and OPM’s guidance, and come back to the table to renegotiate contracts that were corrupted by the previous administration’s illegal actions. It’s time to fully restore the rule of law and the rights and protections of federal workers," Kelley said.

Other unions are expecting the same.

"As outlined in the guidance, we expect agency leaders where we represent frontline workers to immediately set aside any actions taken in accordance with the previous administration’s now-rescinded executive orders and start fresh," said Tony Reardon, national president of the National Treasury Employees Union, in a statement Friday.

"This will clear the table and allow employees and agency leaders to resume good faith negotiations, as the law requires."

The OPM memo also provides guidance on Biden revoking Trump’s order creating a new class of civil service jobs, Schedule F, from which workers could have been more easily fired. That Trump order was a move to take apart the bureaucratic "deep state" seen as disloyal to the prior administration.

Finally, any OPM approvals of Schedule F positions are revoked, and any agency that did receive such an approval "must cancel any actions taken based on OPM approval of the agency’s petition."