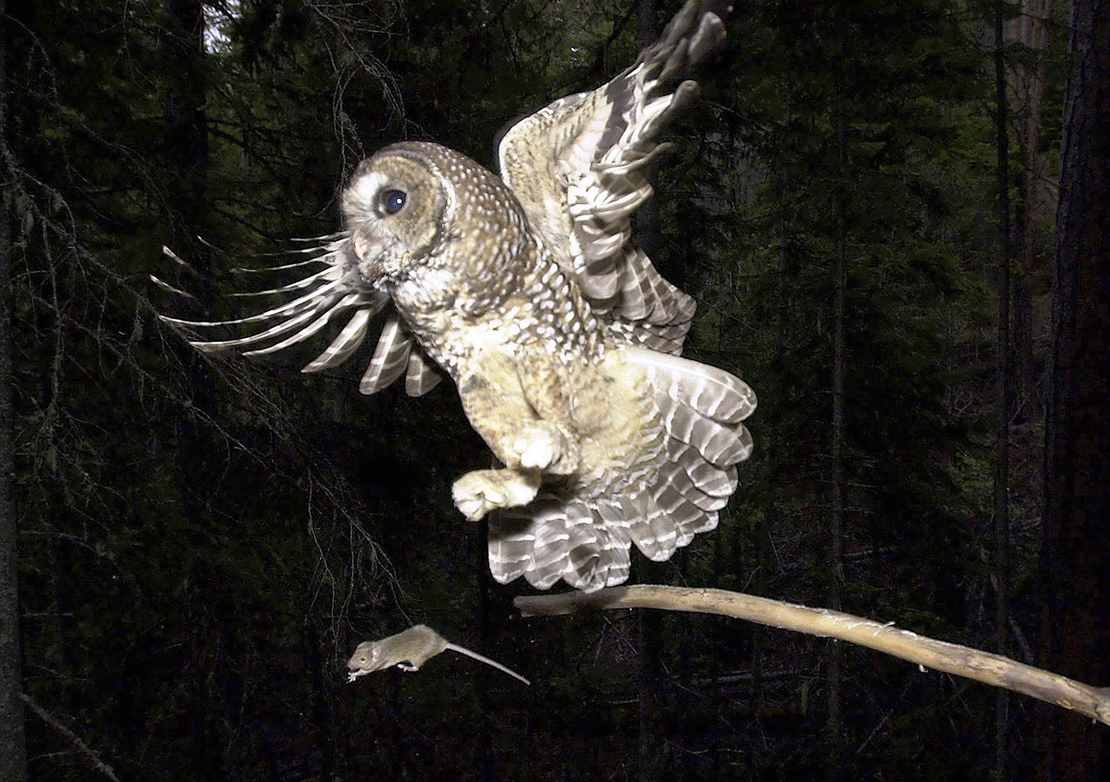 A northern spotted owl — which has been listed as a threatened species under the Endangered Species Act since 1990 — flies after a mouse that had been sitting on the end of a stick. The Biden administration is reversing two key rollbacks during President Trump’s tenure that reduced habitat protections for struggling plants and wildlife. Don Ryan/AP Photo

The Biden administration today moved to rescind Trump administration policies that crimped the designation of critical habitat to protect threatened or endangered species.

In a pair of long-anticipated moves, the Fish and Wildlife Service and NOAA Fisheries proposed getting rid of a Trump-era definition of critical habitat under the Endangered Species Act. FWS is also proposing to end a policy that made it easier to exclude territory.

Taken together, the two proposed rule changes could significantly alter the much-litigated ESA landscape and, supporters say, enhance conservation and recovery of vulnerable animals or plants.

They will also revive the debate over practical consequences and regulatory nuts and bolts that have shadowed the ESA since the day it became law in 1973 (Greenwire, Oct. 19).

“The Endangered Species Act is one of the most important conservation tools in America and provides a safety net for species that are at risk of going extinct,” said Assistant Interior Secretary for Fish and Wildlife and Parks Shannon Estenoz.

Estenoz added that “if finalized, today’s proposed actions will bring the implementation of the Act back into alignment with its original intent and purpose — protecting and recovering America’s biological heritage for future generations.”

The proposed changes would reverse ESA moves made in December 2020, during the final weeks of the Trump administration.

Under the ESA, critical habitat is considered "essential for the conservation of the species."

Federal agencies that authorize, fund or carry out an action on designated land must first consult with FWS to ensure it is not likely to destroy or damage a critical habitat. This can kick in, for instance, when the Forest Service is considering a timber permit or the Bureau of Reclamation is renewing an irrigation water contract.

The ESA further states that critical habitat is to be designated "on the basis of the best scientific data available and after taking into consideration the economic impact, the impact on national security, and any other relevant impact."

Last week, for instance, the Fish and Wildlife Service proposed designating more than 1.4 million acres in Oregon and California as critical habitat for a population of the Pacific marten, a vulnerable forest-dwelling mammal. Most of the designated habitat is owned by the federal government (Greenwire, Oct. 22).

Some of the most sprawling designations have provoked consternation among natural resource industry interests, such as the evergreen debate over how many million acres should be designated for the northern spotted owl.

FWS has been reconsidering the Trump administration’s reduction of the owl’s critical habitat from 9.6 million acres to 6.1 million acres.

One of the December 2020 rule changes revised the process for considering critical habitat exclusions.

The Trump-era regulations imposed last December allowed that "other relevant impacts" may be considered, including public health and safety, risk of wildfires, or pest and invasive species management (Greenwire, Dec. 17, 2020).

Trump’s FWS Director Aurelia Skipwith said at the time that "in addition to improving consistency and predictability for stakeholders, these regulations will stimulate more effective conservation on the ground."

Now, the agency says it has “re-evaluated this rule and concludes that the conservation purposes of the ESA are better met by resuming its previous approach to exclusions.”

“We’re relieved that the Biden administration has taken this important step toward restoring critical protections for imperiled species,” said Noah Greenwald, endangered species director at the Center for Biological Diversity. “There’s just no way to save animals and plants from extinction without safeguarding the places they need to live.”

A second December 2020 rule change established for both FWS and NOAA Fisheries a joint regulatory definition of the term "habitat" under the ESA.

The agencies under the Biden administration have concluded that whether a certain area qualifies as habitat for a species should instead be made on a case-by-case basis. The agencies reason that the Trump administration’s definition excluded from consideration degraded areas that do not currently support species but that could still be essential for conservation of the species.

“If finalized, today’s proposed action of rescinding the regulatory definition of habitat will improve our ability to use the tool of critical habitat designation appropriately and effectively to conserve listed species as envisioned in the statute,” said Janet Coit, the assistant administrator for NOAA Fisheries.

Earthjustice, on behalf of multiple environmental groups, filed three lawsuits against the Trump administration for its ESA rollbacks. One is still being litigated, and two are stayed pending completion of the rulemakings announced today.

Jonathan Wood, vice president of the Montana-based Property and Environment Research Center, said, “While the 2020 rules were not perfect, axing them without consideration of their benefits or how they could be improved serves only to generate conflict and litigation.”