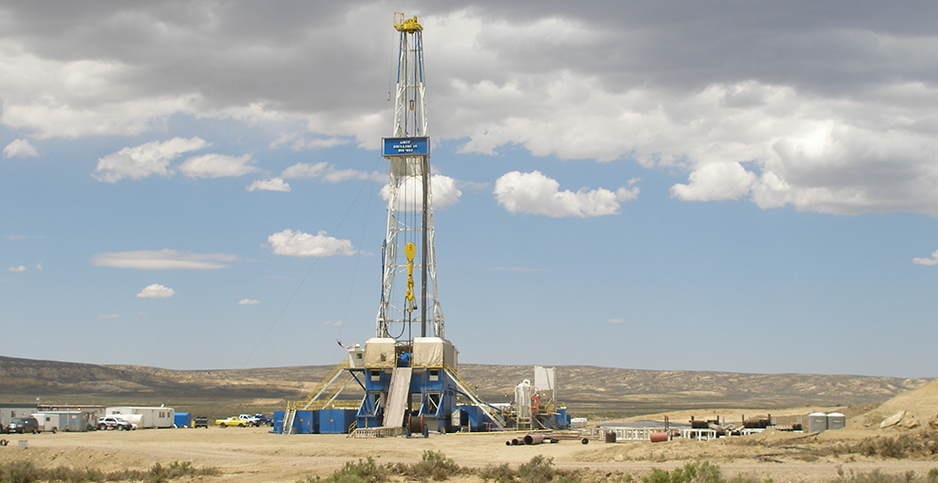 A drilling rig is pictured on public lands in Wyoming. Bureau of Land Management Wyoming

With little fanfare, the Biden administration today released a much anticipated report on how to reform the country’s oil and gas program that suggests higher royalties and more restrictions on where the oil industry can drill on public land.

The report takes aim at the amount of public land available to industry, suggesting that shielding areas with low oil potential would free those acres up for other uses.

It argues that Interior should increase the royalty rates that oil companies pay for drilling federal minerals, as well as strengthen the requirements for companies to set aside the money needed to plug and reclaim wells. The report also states the $2 minimum bid per acre to buy leases at auction is too low, urging an increase to discourage speculation.

Interior said today the report concludes the comprehensive review of the federal oil program requested by President Biden in January. It doesn’t enact any policy changes itself. But it offers a road map for where this administration may go in terms of changing the fossil fuel program to account for climate change and other impacts.

“This review outlines significant deficiencies in the federal oil and gas programs and identifies important and urgent fiscal and programmatic reforms that will benefit the American people,” said Secretary Deb Haaland in a statement today.

She said: “The Interior Department has an obligation to responsibly manage our public lands and waters — providing a fair return to the taxpayer and mitigating worsening climate impacts — while staying steadfast in the pursuit of environmental justice.”

A 100-year-old system that charges private oil companies to drill and produce federally owned oil and gas deposits — another program supports the production of coal on federal lands — the program was designed to enhance national energy production and flush federal coffers.

But the program has become a focus for both conservatives and environmentalists under the climate-focused Biden administration.

Green groups have complained Biden hasn’t done enough to reduce fossil fuel use on public lands, the one area of the nation’s oil and gas production where the White House has direct influence.

Activists and environmental justice groups have become increasingly hostile to the oil program for its prominence on public lands, which they argue should be reserved for uses like wildlife, wilderness, clean energy sources and recreation rather than fossil fuel development.

But oil champions have argued that traditional industry can coexist with other uses, while warning that depression of oil and natural gas production on federal land will only send drillers elsewhere and do little to slash emissions.

The Biden administration called for this review of the federal oil and gas program in January to consider its return to the American taxpayer, its climate impacts and whether to change royalty rates to offset some of the programs climate damaging emissions.

Interior soon after pledged to release an interim report on its findings by summer but delayed its release without explanation.

A GOP lawmaker today suggested the holiday release of the report is purposeful, a way to reduce public scrutiny on the reform agenda.

“DOI is quietly releasing this report on a holiday weekend, months after they promised it, in the hopes that no one notices their continued attacks on domestic energy,” said House Natural Resources Committee ranking member Bruce Westerman (R-Ark.).

“They’ll veil their attacks behind the guise of ‘increased reviews,’ ‘necessary reforms,’ ‘adjusting royalty rates,’ and more, but we know the real story,” he said. “They will bog small energy companies down in years of regulatory gridlock, place millions of acres of resources-rich land under lock and key, ignore local input, and sell out to overseas suppliers.”

House Natural Resources Chair Raúl Grijalva, who has utilized his leadership position to advance a host of oil and gas reforms included in the report, said its findings underscore the need for Congress to act. Measures like increased royalty rates and stiffer bonding requirements may be included in the pending reconciliation package being debated on Capitol Hill.

“The administration needs to manage public lands and waters consistent with its climate commitments, and today’s report does not offer a plan to do that," Grijalva, an Arizona Democrat, said in a statement. "What it does offer is a set of important and long overdue reforms to the federal fossil fuel leasing program, which until now has been a public subsidy for oil and gas drilling and extraction."

Some green advocates today were quick to support the reform suggestions, which are familiar policy asks from environmental groups.

“This report makes an incredibly compelling case both economically and ecologically for bringing the federal oil and gas leasing program into the 21st century,” said Collin O’Mara, president of the National Wildlife Federation. “Enacting these overdue reforms will ensure taxpayers, communities, and wildlife are no longer harmed by below-market rates, insufficient protections, and poor planning.”

But others countered that the proposals fail to address the reality of climate change.

“These trivial changes are nearly meaningless in the midst of this climate emergency, and they break Biden’s campaign promise to stop new oil and gas leasing on public lands,” said Randi Spivak, the Center for Biological Diversity’s public lands director.