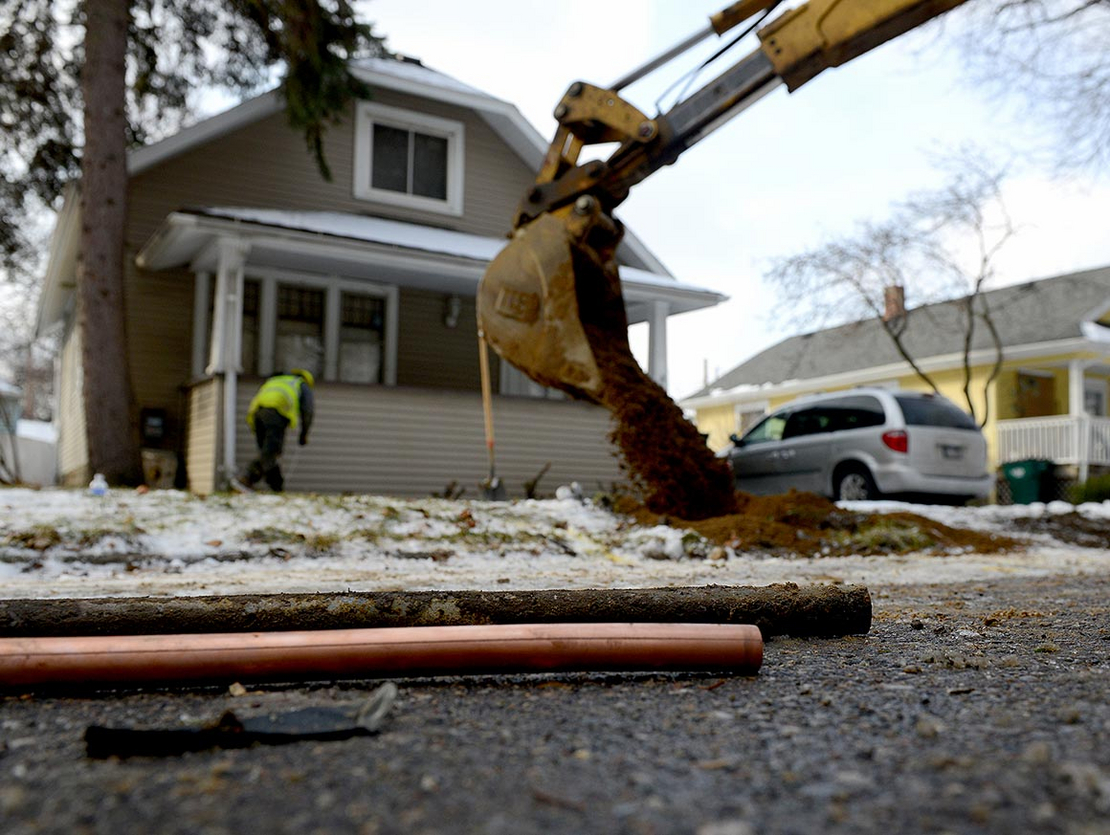 As a hole is filled in behind them, a piece of an old lead water pipe sits next to a new copper pipe. Dave Wasinger/Lansing State Journal via AP

President Biden has made a push to remove the nation’s lead pipelines a cornerstone of his infrastructure agenda, but a requirement to make that happen is noticeably MIA in EPA’s current rule.

“If EPA doesn’t require them to do it, our concern is that, frankly, utilities have had decades to replace their lead service lines or even to identify their lead services lines,” said Erik Olson, head of the Natural Resources Defense Council’s health program. “The ball has been in their courts for decades, and they’ve not done what’s needed.”

EPA for months has been discussing how to revise its Lead and Copper Rule with city and state officials, environmental groups, industry representatives and health advocates at meetings across the country in locations including Newark, N.J., and Memphis, Tenn. In March, EPA Administrator Michael Regan delayed implementation of the Trump- era rule and called for more outreach to consider vulnerable populations (E&ENews PM, March 10).

Lead, a potent neurotoxin, enters drinking water through millions of lead pipelines snaking through the country and can cause negative health effects — including behavioral and learning difficulties, lower IQ, hyperactivity and slowed growth — that disproportionately burden children.

The Trump administration finalized a rule last year and touted the regulation — the first update to federal drinking water standards in nearly 30 years — for closing loopholes, requiring the first-ever testing of drinking water at day care facilities and schools, and advancing inventories of lead service lines. The rule would also ensure that entire, not partial, lead service lines are replaced (Greenwire, Dec. 22, 2020).

But critics have argued that the Trump administration’s rule doesn’t include a requirement to remove all lead lines, and that testing requirements are too weak and may not pick up lead in schools. They’ve also warned that the regulation more than doubles the amount of time water utilities have to replace lead pipelines.

Olson said Biden is the first president to call for removing all lead service lines, a move he applauded. But he said that now, that vow needs to be met with regulatory and financial support.

EPA’s top water official, Radhika Fox, said in an interview earlier this month that she’s “optimistic and hopeful” that the nation can make meaningful progress in removing lead pipelines and protecting the public, given Biden’s call for the removal of all lead pipelines and a legislative package moving through Congress that includes $15 billion to get the job done.

But Fox stopped short of giving a timeline for what comes next, saying that she didn’t want to prejudge the agency’s ongoing review of whether to revise or retain the Trump-era Lead and Copper Rule. The Biden EPA, she said, will make a decision on next steps before the rule takes effect in December.

Fox also acknowledged calls for the rule to require the removal of all lead service lines, a point she said was continuously made during EPA’s roundtables and meetings.

As EPA plots its next step, the focus is on finding the lead pipelines and the ultimate price tag for removing them.

Currently, the infrastructure package would provide a dedicated $15 billion to remove lead service lines, falling short of the $45 billion Biden originally called for in his initial infrastructure pitch and jobs plans. While the White House has said water utilities can also tap into $11 billion set aside as general funds for drinking water projects, advocates have pushed back, noting that that pot of money is also needed for projects like replacing water mains and filtering out emerging contaminants.

Timothy Male, executive director of the Environmental Policy Innovation Center, in an interview said he would like to see the rule include an effort to reduce the cost tied to replacing lead service lines, adding that the White House could lead roundtables with plumbers and major construction companies and city officials who have made progress in removing lead service lines.

Fox said the issue of cost was front and center at EPA’s roundtables. She said participants, for example, discussed reducing costs by removing lead service lines in entire neighborhoods or blocks — as opposed to individual streets — to create economies of scale, but noted that doing so would require strong participation among homeowners.

When asked whether she’s concerned about the infrastructure package offering just $15 billion, Fox said that amount, should it pass through both chambers and be signed into law, would be the single largest investment and a “tremendous down payment.”

Yet another area of concern is the amount of time it will take EPA to craft or revise regulations for lead and copper and how that could affect efforts to map the nation’s lead service lines.

Should Biden’s EPA decide to propose big changes, it would have to do so by issuing a new draft rule in December to amend existing regulations, sources said, a process that could take months or longer and involve a public comment period and cost estimates.

EPA could also allow certain portions of the rule to move forward if the agency determines they’re protective of public health while replacing other provisions, said Betsy Southerland, a former staffer in EPA’s Office of Water.

Male from the Environmental Policy Innovation Center wrote in an online post that the current rule has "major failings," including not requiring the removal of all lead service lines. But Male also said delaying implementation of the Trump-era rule was a mistake because it included some good provisions, including requiring utilities to map all lead water pipes within three years.

If EPA hadn’t delayed the rule, all water utilities would have had to inventory and map lead pipes by January 2024, with one year left in Biden’s first term. Instead, he said, the deadline has now been pushed back to a month before Biden’s term ends.

“Not only does this delay complicate the work needed to get lead pipes replaced, but it also potentially saps critical momentum from this unique moment when we have a president who has personally committed to removing lead water pipes,” Male wrote.

When asked about the delay, Fox emphasized that the Lead and Copper Rule is one of the most important rules at EPA for protecting public health and said the agency opted for a deeper review, given the sheer number of outstanding concerns.

“We carefully considered our decision to extend the effective date of the Lead and Copper Rule based on the choices in front of us,” she said. “There were so many concerns about the rule that was passed not being protective enough that we felt we needed to do the analysis, do the listening.”