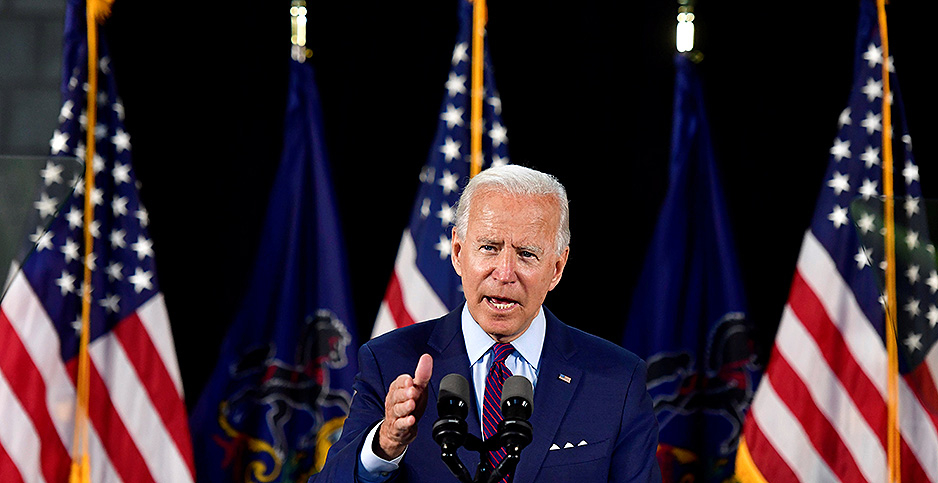 Joe Biden is significantly escalating his climate change agenda with a new $2 trillion infrastructure and clean energy plan that would get fossil fuels entirely out of the nation’s electricity supply in less than 15 years.

In the most substantial addition to his climate plan since rolling out the initial $1.7 trillion platform more than a year ago, the presumptive Democratic presidential nominee is endorsing some of the major requests that his progressive opponents had championed, doubling down on what President Trump has labeled an extremist agenda that would significantly increase costs (Climatewire, June 4, 2019).

Biden is planning to roll out the plan today in a Wilmington, Del., speech, presenting it as the second pillar of his "Build Back Better" agenda of economic recovery and stimulus to recover from the depression caused by the ongoing COVID-19 pandemic.

His campaign claims the platform would create millions of jobs, clean the air, and provide better homes and cars, among other benefits.

"Biden will be a president, unlike President Trump, who listens to the scientists," the official said. "And that’s what the economic conditions demand, to get people back to work and stimulate the economy in the next year."

Some parts would require new legislation from Congress, which could be difficult even if Democrats retain the House majority and take the Senate majority. Others would be achievable with existing executive authority like regulation and spending appropriated funds.

Biden’s proposal focuses heavily on what he could accomplish within a four-year presidential term. It also fulfills calls by progressives and others for Biden to back climate-related milestones earlier than the 2050 economywide net-zero goal that was at the center of his previous climate plan.

The main pillars are a promise to achieve an electricity grid fueled entirely by sources such as wind, solar, hydropower and nuclear by 2035 and massive new clean energy spending. Such a goal was considered aggressively ambitious as recently as two years ago but has since been embraced by onetime presidential candidates such as Washington Gov. Jay Inslee (D) and Sen. Elizabeth Warren (D-Mass.).

The United States receives 62.7% of its electricity from fossil fuels as of last year, according to the U.S. Energy Information Administration.

Biden would also create a program to incentivize drivers to trade in their gasoline- and diesel-powered cars for electric vehicles — modeled on legislation proposed last year by Senate Minority Leader Chuck Schumer (D-N.Y.) — and ensure that at least 40% of the plan’s spending goes to minority communities that have historically seen a disproportionate amount of pollution.

It includes a handful of other environmental justice-focused promises, including the creation of a new "Environmental and Climate Justice Division" at the Justice Department to prosecute companies — and potentially executives — for pollution that affects minorities.

The energy consumption of buildings is also a major point in the plan. Biden wants to have 4 million commercial buildings upgraded for energy efficiency and 2 million homes weatherized in his first four-year term, along with having 1.5 million new homes built, many of them public housing.

"Joe Biden’s climate plan — by a long shot — is the most ambitious we have ever seen from any president in our nation’s history. It will get our economy humming again, and give our children a healthier, more just and more hopeful future. And he has committed to getting started on day one," Gina McCarthy, president of NRDC Action Fund, said in a statement.

"This is the kind of leadership we need in the face of a challenge of this scale," she said. "And it shows exactly why we need to make sure Joe Biden is our next president — for our children, for our planet and for our future."

NRDC Action Fund, the advocacy affiliate of the Natural Resources Defense Council, has endorsed Biden for president, and McCarthy served as EPA administrator during the Obama administration, when Biden was vice president.

Paul Bledsoe, an adviser at the Progressive Policy Institute, said Biden’s plan fits with where the Democratic Party now stands on climate.

The Trump campaign slammed the new platform as a far left-wing wish list that proves extremists have taken over Biden’s campaign.

"At a time when America’s economy is making a comeback, Biden is proposing to kill millions of jobs, spike families’ electrical bills, raise taxes, and heap tens of thousands of dollars in costs on households. It’ a stunning display of economic incompetence from a man who oversaw the worst economic ‘recovery’ since the Great Depression the last time he was in charge," spokesman Andrew Clark said.

"Our economy — we’ve been very active in the production of energy; we have hundreds of thousands of jobs. Two hundred fifty thousand jobs would be lost under Joe Biden’s Green New Deal energy plan, higher energy costs, and who gets hit the hardest is low-income families," Scalise said on a call organized by Trump’s campaign, adding that Biden has an "anti-fossil fuel message" and has "bought into the Green New Deal message lock, stock and barrel."

Scalise said putting that much money into fighting climate change would inevitably lead to significant government spending on failing companies. He brought up the high-profile 2011 bankruptcy of solar company Solyndra after receiving a loan guarantee under the American Recovery and Reinvestment Act of 2009.

"Can you imagine if we give Biden now $2 trillion of taxpayer money? We will see Solyndras all across the nation, which would lead to higher energy costs and lost jobs," Scalise said.

Kelly said Trump has made the United States "the strongest exporter of energy in the world," but Biden would threaten that, and would likely ban hydraulic fracturing — despite his statements that he would not.

"Pennsylvania voters are going to be able to see real soon what Biden’s policies on fracking will be," Kelly said.