Biden and Capito to meet again amid ‘cut-bait’ warnings 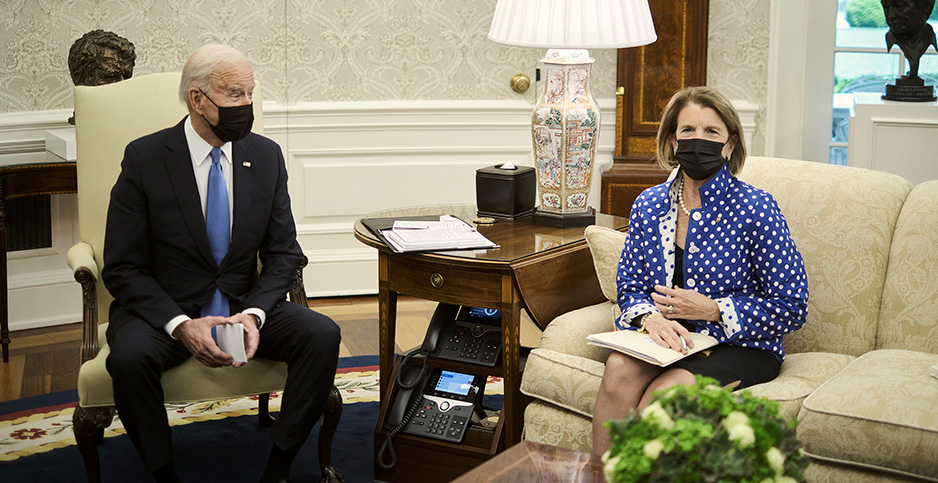 President Biden will host the top GOP negotiator on infrastructure this afternoon, as the administration continues to signal that the quest for bipartisanship will soon wrap up unless a breakthrough soon emerges.

Biden and Sen. Shelley Moore Capito (R-W.Va.) will meet this afternoon at the White House to "continue their bipartisan negotiations about investing in our middle class and economic growth through infrastructure," an administration official told reporters yesterday.

The latest huddle between Biden and Capito, the ranking member on the Environment and Public Works Committee, comes days after Senate Republicans submitted a $928 billion counteroffer to Biden that includes more funding for water projects and electric vehicles.

The GOP counteroffer followed Biden’s offer to reduce the size of his American Jobs Plan from $2.3 trillion to $1.7 trillion.

White House spokesperson Karine Jean-Pierre said yesterday that Biden was "appreciative and heartened by the good-faith effort that we’ve seen from Republican senators."

However, she added that "we do need to finish these negotiations soon" and said "this week will be incredibly critical."

In an appearance on CNN’s "State of the Union" over the weekend, Transportation Secretary Pete Buttigieg described the latest GOP counteroffer as a mixed bag.

"The fact that they philosophically seem to agree that trillion-dollar investments are the kind of thing we need to be doing right now, that’s encouraging," Buttigieg said. "But we aren’t exactly aligned."

He singled out EVs and Biden’s proposal to replace all lead pipes used for drinking water as examples of the disconnect between the two parties.

To replace lead pipes, the president originally sought $45 billion. In their latest proposal, Republicans provide $72 billion for water infrastructure but make no mention of lead pipes. The Republican offer does not contain further details on how the funds will be spent.

"There’s a lot of daylight here," Buttigieg said, noting that the goal of the administration is "making sure that we’re sparking an electric vehicle revolution and that it happens in the U.S. with American workers on American soil."

He also pointed to a "commitment to make sure that we get rid of 100% of lead pipes in this country." Buttigieg concluded that "we didn’t see as much of that in the counterproposal."

The Biden administration said last week that talks would continue over the Memorial Day recess, but Buttigieg said that when lawmakers return next week "we need a clear direction."

"I think we are getting pretty close to a fish-or-cut-bait moment," the secretary later added.

‘Get to real compromise’

In an appearance on "Fox News Sunday," Capito said she believed that a deal remains possible, citing Biden’s encouragement.

"I think we can get to real compromise, absolutely, because we’re both still in the game," she said. "I think the president told me himself that let’s get this done. We realize this is not easy. I think we bring every idea that’s on the table into the negotiations to see how we can achieve this and get it across the threshold."

But Capito also conceded that the two sides remain far apart on both the scope and financing of the infrastructure push.

On EVs, she noted the inclusion of $4 billion in the latest GOP offer but rejected Biden’s push for vouchers for vehicle purchases as "something we need to discuss at a different time."

Capito again rejected the administration’s push to pay for the infrastructure package by hiking corporate tax rates, calling instead for repurposing unspent COVID-19 relief funds and user fees — both of which have been rejected by the White House.

"We all know when you raise taxes in one place, it’s felt everywhere," she said.

The U.S. Conference of Mayors, National League of Cities and National Association of Counties yesterday released a letter to congressional leaders opposing the repurposing of COVID-19 relief funds.

Liberal Democrats continue to express skepticism toward the negotiations. Sen. Kirsten Gillibrand (D-N.Y.), suggested Sunday that it was time for Democrats to go it alone via budget reconciliation, which would allow for the infrastructure package to be enacted with just Democratic votes.

"Minority Leader Mitch McConnell (R-Ky.) has already said his goal is to defeat the agenda of this administration," she said on CNN’s "State of the Union."

"And I don’t think there’s necessarily goodwill behind all negotiations. And I think the American people elected us to solve the problem of COVID, to rebuild the economy, rebuild the infrastructure. And I think it’s our moment to act."