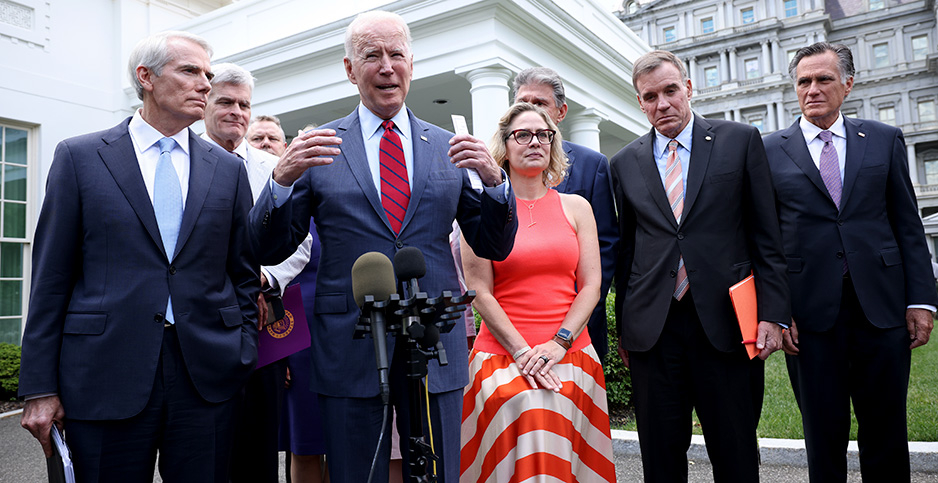 President Biden with a bipartisan group of senators at the White House today. Kevin Dietsch/Getty Images

A bipartisan group of senators emerged from the White House with President Biden this afternoon to announce an agreement on infrastructure.

The White House announcement on a $1.2 trillion "bipartisan infrastructure framework" follows intense meetings on Capitol Hill yesterday, which ended with the announcement of a breakthrough. Still, many details have yet to be worked out (E&E Daily, June 24).

There’s also a matter of whether climate hawks will be satisfied with what provisions are currently in the compromise plan. Sen. Bill Cassidy (R-La.) made note of the bipartisan deal’s inclusion of language to address coastal resilience in remarks outside the White House today.

"There’s $47 billion for resiliency," Cassidy said. "So I do think, as we focus upon the roads and bridges that are so important, we also think about how we are making a beginning investment in resiliency that will be essential as we address our changing environment."

He added, "We’ll also be creating those jobs that help to rebuild the coastline, or to build the pipelines to sequester off the carbon dioxide, etc. And I think it’s important to send the message: There’s gonna be a lot of jobs that come out of this."

But back on Capitol Hill, House Speaker Nancy Pelosi (D-Calif.) was telegraphing that this won’t be sufficient.

At her weekly news conference, she formally aligned herself with progressives who have said they won’t vote for a bipartisan deal on a narrower infrastructure package unless there is a companion bill full of Democratic priorities, like massive investments to address climate change, to go along with it.

Pelosi’s new red line could have major consequences for the fate of fragile negotiations, deepening Republican distrust of Democrats in power and intensifying the pressure on moderate Democrats to pursue a partisan path they had hoped to avoid.

An hour before the White House meeting was set to take place, Pelosi confirmed that the House would take up no such measure unless the Senate also pursues reconciliation to advance the agenda items Republicans have snubbed.

Reconciliation is the procedural maneuver that allows the majority to bypass the filibuster to pass legislation in the Senate along party lines.

It also would make substantial investments in combating climate change and achieving environmental justice, policies that fiscal hawks say are too costly and conservatives argue would lead to new regulations that would crush businesses and industries.

"What President Biden, the Biden-Harris administration, is doing, it really should be giving people hope," Pelosi said of the administration’s blueprint, which Democrats want to implement and expand upon.

"It’s transformative, if not revolutionary," she said. "It’s transformative in that we are talking about doing infrastructure in a way that is about the future, that protects our planet, that is resilient and green and sustainable."

In recent weeks, the most vocal environmentalists in the Senate Democratic Caucus have warned against moving forward with a bipartisan infrastructure bill without a reconciliation bill that goes big on climate provisions.

The White House announcement – including Cassidy’s climate resilience funding – will certainly not be enough to entice progressives. As the hashtag "#NoClimateNoDeal" has taken off on Twitter, it has become a rallying cry that Democratic leaders could not ignore in a 50-50 Senate or a House where Democrats can spare only four votes.

As broader talks continue, both the Senate and the House are moving forward with infrastructure bills and packages — some bipartisan, others not.

Senate Majority Leader Chuck Schumer (D-N.Y.) said this morning in remarks on the Senate floor that he would pursue a two-track strategy in July. That’s the bipartisan deal and the Democrats-only package.

A budget resolution provides for a reconciliation bill.

But while this is a victory for progressives, it has put moderates in a bind — and Democrats in both chambers cannot afford to alienate these members, either.

This is a particularly profound dilemma in the Senate, where the party’s ultimate swing vote, Sen. Joe Manchin (D-W.Va.), is refusing to commit to voting on a reconciliation bill until he sees what’s in it.

"We have to see what’s in the other plan before I can say, ‘Oh, yes, you vote for this, and I’ll vote for that,’" Manchin told reporters this morning. "I didn’t sign up for that."

Republicans, in turn, could decide to peel away from any bipartisan proposal to thwart a reconciliation package filled with provisions they don’t like.

Pelosi has already put the gears in motion to anger Republicans on an entirely different issue this morning: She will call for the establishment of a House select committee to probe the Jan. 6 attack on the U.S. Capitol after the GOP blocked the creation of an independent commission.