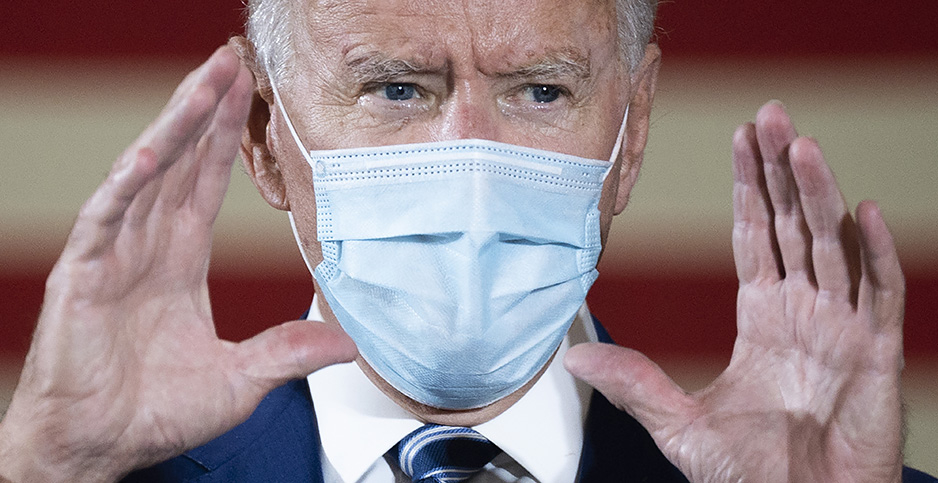 Joe Biden last night said the U.S. will need to capture emissions from fossil fuel-burning power plants in order to meet his climate goals — a controversial message among progressives that underscores the challenges of rapidly untangling coal and natural gas from the economy.

Biden raised clean energy, unprompted, during the first half-hour of his ABC News event, around the same time that Trump was questioning the election’s integrity and denying that he promotes conspiracy theories. Biden later outlined some aspects of his climate plan in unusual detail.

Biden paired those ambitious promises with messages aimed at moderate voters by nodding to bipartisanship, sensitivity to energy workers and rebukes of the political left.

Calling it by the wrong name, Biden said he breaks with the Green New Deal over its opposition to fossil fuels. He renewed his qualified support for hydraulic fracturing and said natural gas should be part of the energy transition.

"What we have to do is focus on the transmission of energy across the country from areas relating to solar and wind," Biden said.

Building out transmission infrastructure is something Biden rarely, if ever, mentions on the campaign trail. It was one of several lengthy answers where the former vice president sought to demonstrate policy depth, as he did on education, tax policy, and even battery storage.

"The battery technology’s increasing significantly so you’re going to be able to have, for example, solar on your home and a battery the size," making a large box shape with his hands, "in your basement so when the sun doesn’t shine for five days, you still have enough energy," Biden said.

Biden also stressed the need for carbon capture and sequestration — his most high-profile embrace of the concept yet.

The world’s top climate science body, the United Nation’s Intergovernmental Panel on Climate Change, has said that keeping warming below catastrophic levels will require some form of negative emissions.

Unions in fossil fuel industries have turned to carbon capture as a lifeline. Embracing the technology early in the campaign won Biden important labor support — including, he noted during the town hall, from the International Brotherhood of Boilermakers, which has a deep presence in oil refineries, heavy industry and fossil-fuel power plants.

But many progressives and climate activists balk at it, arguing that the technology is too expensive and offers an excuse to stall the transition away from gas- and coal-generated electricity.

Low energy prices have also complicated the technology’s path forward. Texas’ Petra Nova, one of the world’s largest carbon-capture power projects, has been idle since May because it’s been unable to sell its captured CO2 for enhanced oil recovery.

Biden has mostly avoided controversy on carbon capture by focusing his climate pitch on other policies. But he seemed to lean into it for his Pennsylvania town hall, blending it with his plan for net-zero electricity emissions by 2035.

He put an even greater emphasis on nonrenewable energy when he was asked to clarify his stance on the Green New Deal. Since last year, Biden’s campaign website has called the Green New Deal a crucial framework. But last night he sought more distance from it.

The resolution calls for a 10-year mobilization toward generating 100% of U.S. electricity from "clean, renewable, and zero-emission energy sources."

Biden said nonrenewable energy has to be in the mix.

"The difference between me and the new green deal is they say, automatically, by 2030 we’re going to be carbon free. Not possible," Biden said.

"My deal is a crucial framework, but not the new green deal," Biden said. "The new green deal calls for elimination of all nonrenewable energy by 2030. You can’t get there. You’re going to need to be able to transition. … [In my plan] we invest in new technologies that allow us to do things that get us to a place where we get to net-zero emissions."

Beyond carbon capture, he said the U.S. could sequester greenhouse gases by conserving more land — in part by paying farmers to change their practices. He also emphasized forests.

"The biggest carbon sink in the world is the Amazon. More carbon absorbed from the air, diminishing global warming, in the Amazon than all the carbon emitted on a yearly basis from the United States of America," he said.

"First of all, I make it clear, I do not propose banning fracking," he said in response to a question about fracking’s impact on community health, wildlife and the environment.

"I think you have to make sure that fracking is in fact not emitting methane, or polluting the well, or dealing with what can be small earthquakes in how they’re drilling. So it has to be managed very, very well," he said.

Wind and solar energy are the future, Biden said, adding that he oversaw the 2009 Recovery Act’s investments that eventually lowered the cost of renewable energy.

Instead of subsidizing the oil industry, he said, the government should hire fossil fuel workers to seal thousands of uncapped oil and gas wells.

"We could hire 128,000 of these people who are working in the industry to cap these wells and get a good salary doing it now," he said.

On the Supreme Court, Biden has tried to avoid answering whether he would add justices to nullify the impact of Trump’s appointees.

Biden said he didn’t want to distract from what he called the improper sprint by Republicans to confirm Judge Amy Coney Barrett, who this week said she wasn’t "competent to opine on what causes global warming or not" (Climatewire, Oct. 15).

Biden, when pressed on the matter, said he’s "not a fan" of adding justices — though he’s waiting until her confirmation vote to announce his stance. He promised that would happen before Election Day.

"It depends on how this turns out. Not how he wins, but how it’s handled," he said, mentioning the way Senate Republicans handle Barrett’s nomination on the Senate floor.

"I’m open to considering what happens from that point on."