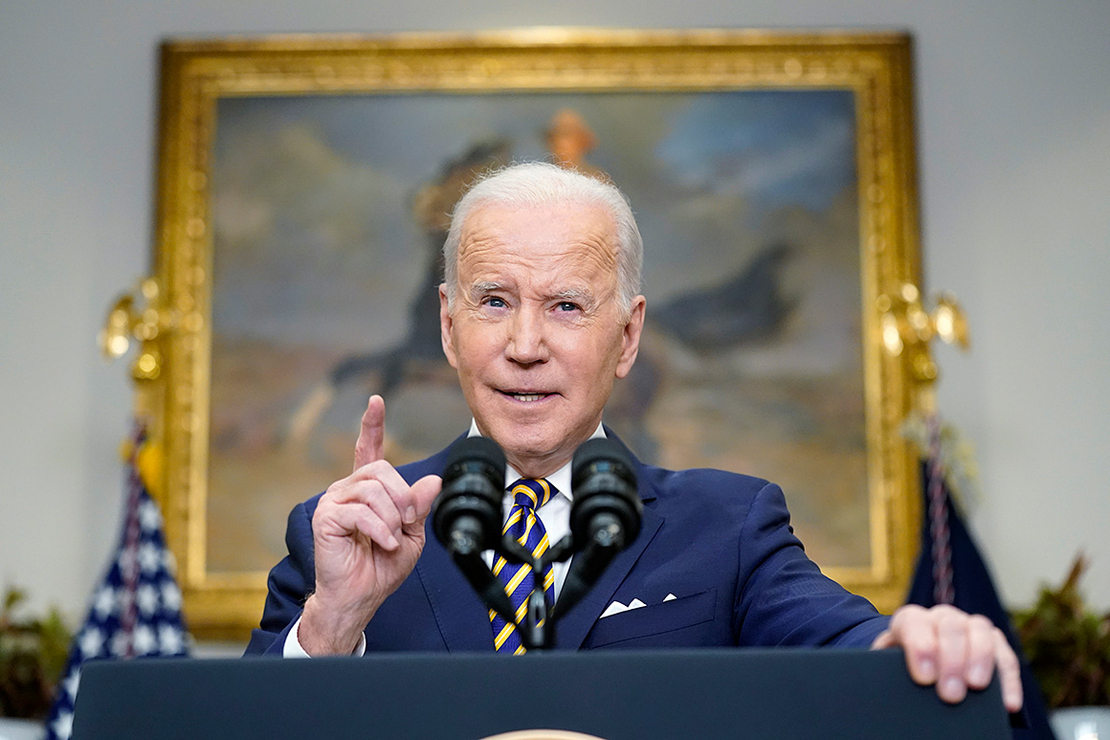 President Biden announces a ban on Russian oil imports, toughening the toll on Russia's economy in retaliation for its invasion of Ukraine, today at the White House. Andrew Harnik/AP Photo

President Biden today banned imports of Russian crude oil and natural gas, aiming to increase the economic pressure on Russian President Vladimir Putin as his war against Ukraine rages on.

“The United States is targeting the main artery of Russia’s economy,” Biden said in a briefing today. “The American people will deal another powerful blow to Putin’s war machine.”

The White House is also instituting a prohibition on Russian petroleum products, liquefied natural gas and coal, according to the executive order Biden signed today. It also blocks U.S. entities from new investment in the energy sector in Russia.

In the initial aftermath of troops moving into Ukraine in late February, the Biden administration and allies deployed financial sanctions against Russia, but sought to bypass a crude and natural gas embargo out of fears of pushing up global energy costs. The president today acknowledged this likely ripple effect.

“This is a step we are taking to inflict further pain on Putin, but there will be cost as well here in the United States,” he said.

The U.S. benchmark price, West Texas Intermediate, hit $128 this morning, the highest in a steady upward trend since the Ukrainian invasion. The average price of gasoline hit a record $4.17 per gallon today, surpassing a previous record set during the oil boom of 2008, according to AAA. Gas pump prices have surged in recent weeks as crude oil prices climbed.

A coordinated release of U.S. and ally reserves of 60 million barrels of crude oil last week has failed to slow the increase.

Despite inflation fears, political support on Capitol Hill for halting Russian imports has grown in recent days, urged on by Ukrainian President Volodymyr Zelenskyy, who has pressed the United States to broaden its economic sanctions that already targeted Russia’s largest banks, central bank and finance ministry.

“We will not be part of subsidizing Russia’s war,” Biden said this morning.

Biden’s move follows the European Union’s announcement that it will cut its consumption of Russian gas by 66 percent as it prepares to fully end its reliance on Russian supplies. The United Kingdom also announced today that it would phase out Russian oil and oil products by the end of the year. The U.K. relies on Russian oil for about 8 percent of its supply.

Biden noted that European allies would not be able to quickly stop their reliance on Russian supplies, while the U.S.’s oil and gas sector is powerful enough to do so.

“We can take this step as others cannot,” he said, while also warning the oil and gas sector not to capture excess profits from this crisis.

“Russia’s aggression is affecting us all, and it’s no time for profiteering,” he said.

“Our industry is prepared to comply with the import ban in response to this aggression,” said Mike Sommers, CEO of the American Petroleum Institute. “The industry has already taken significant and meaningful steps to unwind relationships, both with respect to assets in Russia, as well as imports of Russian crude oil and refined products.”

Biden acknowledged his ban comes after announcements by many energy and tech companies to stop doing business in Russia in response to the aggression against Ukraine, noting Apple Inc., Visa Inc. and Ford Motor Co., among others.

Oil and gas companies like Exxon Mobil Corp., BP PLC and Equinor ASA are among those that have already announced they are ending new purchases of Russian oil. Shell PLC, after taking heat for buying some urals, Russia’s benchmark crude oil, apologized and pledged to phase out further purchases.

“We are acutely aware that our decision last week to purchase a cargo of Russian crude oil … was not the right one and we are sorry,” CEO Ben van Beurden said today, according to Reuters.

“Because this legislation is an urgent imperative — both morally and for our security interests — the House will consider this legislation on the Floor today. It is our hope that we have a strong, bipartisan vote,” Pelosi wrote.

House Majority Leader Steny Hoyer (D-Md.) expressed concern that “the price of gas that is already high would go higher,” but he noted the U.S. only imports a small amount of Russian oil.

Biden said today the oil ban was a bipartisan issue, that both Republicans and Democrats on Capitol Hill understood the U.S. “must do this.”

But the expectation of an oil ban, first reported this morning by Bloomberg, did little to calm the political division over Russia and oil.

In response to the news of an import ban this morning, Sen. Steve Daines (R-Mont.) said “great.”

“Now instead of looking to Iran and Venezuela for oil — work with American producers and unleash American energy production,” he said in a statement.

“So, while the Ukrainians are fighting Russia, Democrats are trying to fight a war on the law of supply and demand. They only want to have to look at solar panels and windmills here at home, so they want to get our oil and gas from everywhere else,” he said on the Senate floor.

The war in the Ukraine has exacerbated a sore issue for the Biden administration: climate policy versus energy demand.

Climate change experts have urged Biden to do more to shift the country away from fossil fuels, even as the industry and the political right have slammed the White House for actions like canceling the Keystone XL pipeline, which would have offered an additional pipeline to connect tar sands crude oil in Canada to U.S. markets.

The administration has also been under political attack for attempting to slow down the federal oil and gas program to institute reforms, but that political and policy battle has been complicated by the courts.

Biden’s nearly yearlong moratorium on new energy leasing on public lands was overturned by a federal judge. But its first — and only —federal oil sale, in the Gulf of Mexico this winter, was also overturned by a different federal judge for failing to account for climate impacts.

On the other hand, the Biden administration has continued to approve oil and gas drilling on federal lands at a rapid clip, outpacing in its first year in office the Trump administration’s first year — a fact that Biden underscored during his sanctions announcement.

Russia’s aggression against Ukraine has accentuated the interconnected nature of global oil and gas supply and consumption, with political leaders in the U.S. hamstrung to rapidly respond to the dearth of supply in the private sector.

Russia is the third-largest oil producer in the world and supplies the lion’s share of natural gas for Europe. Russia supplied about 8 percent of U.S. imports of oil and refined products last year, according to the U.S. Energy Information Administration.

Both Biden officials and the oil industry’s most influential CEOs warned this week that oil volatility will continue, even before the announcement of additional sanctions.

“The volatility of price, and with supply and demand, is something we’re going to live with for a little while,” said John Kerry, Biden’s special envoy on climate yesterday at CERAWeek by IHS Markit, an energy conference in Houston.

CEOs have used this moment to stress the importance of oil and gas investments to stave off the price shocks and crippling economic impacts of roiled global energy markets.

“The focus really should be on energy security, and oil and gas have a vital role to play in the global economy,” said John Hess, CEO of Hess Corp. in a panel at CERAWeek yesterday. “Oil and gas are needed for decades to come, and the key challenge to oil and gas is investment.”

But the White House has rejected that conclusion.

“This crisis is a stark reminder to protect our economy over the long term we need to become energy independent,” Biden said today. “It’s just not tenable. It should motivate us in a transition to clean energy.”

Environmental groups have rallied around the same idea.

“One of the most important measures we can take right now is to reduce our dependence, at home and abroad, on the oil and gas that’s helping to bankroll the Russian military,” said John Bowman, managing director for government affairs for the Natural Resources Defense Council. “That means shifting away from the fossil fuels that lock in dependence on belligerent petro states and drive us toward climate catastrophe.”

Even with oil prices increasing, drilling has not kept pace, and there is little a sitting U.S. president can do to force a ramp up of oil and gas drilling by private companies, experts have said (Climatewire, March 7).

Occidental Petroleum Corp. CEO Vicki Hollub said today that many oil companies that hadn’t planned to expand drilling this year likely wouldn’t be able to rapidly shift their strategy, during a talk at CERAWeek.

“Everyone came into this year wanting to keep production pretty much flat; no one really prepared for significant growth,” Hollub said. “If you didn’t plan for growth, you won’t be able to achieve growth today.”

The rig count in the U.S. held at 650 earlier this week — a rally from last year — but still low compared to the more than 800 in the field in 2019, before Covid-19 all but froze worldwide economies.

Now the war and responses to the war are exacerbating the tight supply, with energy insecurity priced in.

“Fundamentals are no longer the key driver of the market,” said Kaushal Ramesh, senior analyst for Rystad Energy, in a client note today.

The Russian oil ban will likely push benchmark crude prices higher in both Europe and the U.S., with WTI holding over $120 per barrel into May, according to a recent analysis by Bloomberg Intelligence.