Biden bet big on climate. Will the GOP raise, call or fold? 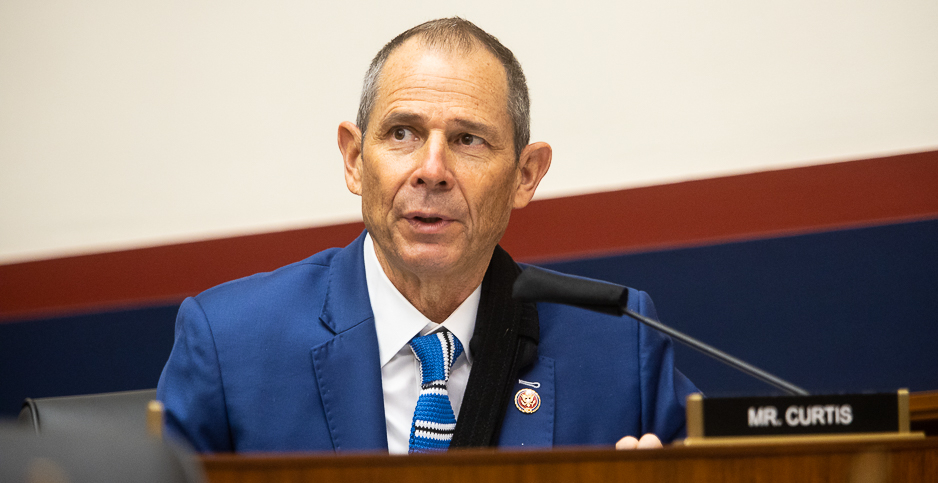 Joe Biden kicked off his presidency with a blitz of climate action.

Now comes the hard part: making policy that doesn’t rely on executive orders and can outlast his administration.

To do that, Biden will need to win over at least some Republicans in Congress. But it’s unclear whether GOP lawmakers are more receptive now to climate action than they were in the final days of the Obama administration.

Under former President Trump, climate denialism saw a resurgence in the Republican Party. Conversely, a small group of Republican lawmakers in recent years have signaled a willingness to take seriously the issue and its potential solutions.

Which side will prevail is anyone’s guess.

Enter Rep. John Curtis (R-Utah), who has been vocal about the need for his party to do more on climate change.

Curtis said he is working to court more climate action with his GOP colleagues. His message: There is money to be made on renewable energy. And if the United States doesn’t do it, other countries will fill the void.

But Curtis does not have much of a national profile and is crowded out in places like Fox News, One America News Network and other conservative outlets by figures such as Rep. Marjorie Taylor Greene (R-Ga.), who blamed the climate-fueled California wildfires on space lasers.

Meanwhile, some Republicans have resorted to familiar talking points.

Sen. Ted Cruz of Texas is handing out bumper stickers that claim President Biden cares more about the people of Paris than he does about Pittsburgh.

Sens. John Barrasso of Wyoming and Steve Daines of Montana wrote a letter with more than a dozen colleagues opposing Biden’s climate moves and claiming they would lead to economic devastation.

Rep. Mo Brooks of Alabama, who spent years denying basic climate science and then the last two months denying election results, has been seated on the House Science, Space and Technology Committee, along with other GOP lawmakers who have questioned humanity’s contributions to global warming.

In some ways, observers said, it seems to be business as usual in Washington when it comes to climate. But others see cracks in the firmament of denialism. They note that while louder voices in the party are attacking climate action, the majority has been relatively quiet in the last two weeks. What’s more, some lawmakers are keenly aware that corporate America and business groups are moving faster than the party on climate action.

Ben Pendergrass, senior director of government affairs at the Citizens’ Climate Lobby, said most GOP lawmakers have moved past the stage of climate denialism. They recognize that the GOP is being left behind by voters as well as corporate America, he added.

"It’s really not just about the climate and protecting the country from these changes," he said. "It’s about the future of the Republican Party."

Republicans are picking up signals not only from businesses but also from influential Washington players such as the U.S. Chamber of Commerce, which announced recently that it would support a market-based mechanism to address climate change, said Alex Flint, executive director of the Alliance for Market Solutions, which advocates for a carbon tax.

Flint said Republicans are aware that voters, including some conservatives, want more action on climate and that the issue can make a difference in elections. He said some Republicans resent that business interests are moving at a faster pace than they would prefer. But others realize the party needs to do more.

Flint said Biden’s executive actions will only take his climate policy so far, particularly since they can be rolled back by a future president. He said Congress is where lasting action on climate must happen.

"The president’s announcements were very broad, and the point was made that all parts of the executive branch are going to touch on climate," he said. "But the president’s authorities are inadequate to address the challenge."

That could come in the form of a carbon tax or other market-based pricing of carbon, he said. Biden’s international climate envoy, John Kerry, and Treasury Secretary Janet Yellen both have recently noted their support for a carbon tax.

Even if a carbon tax is a heavy lift, there is room to get some modest bipartisan climate bills through Congress in the near future, said Pendergrass of the Citizens’ Climate Lobby. He said Republicans are motivated to explore natural carbon sequestration solutions, including in the agricultural sector as well as through "blue carbon," which uses the world’s oceans and coastal ecosystems to capture CO2.

In more than 400 meetings with members of Congress, Pendergrass said, his group found "the ground shifting in the direction of more engagement" on climate from Republicans. He said the change is largely propelled by corporate America, which has ramped up its own plans for climate action.

He pointed to General Motors Co.’s recent announcement that it would make only all-electric vehicles within 15 years. He said that move, and others like it, likely would be the best bet to motivate Republicans.

"We’re seeing a vast move by corporate America toward climate action, and we’re seeing in particular most companies calling for market solutions to climate change, and of course the primary market solution to climate change is a market price," he said, adding, "Business is clearly stating not just a preference for action, but a preference for action in a specific direction."

Like many Republicans, Curtis talks about natural gas as a key part of a carbon mitigation strategy.

While that’s a non-starter for many Democrats, Curtis noted that Republicans often represent districts where a significant chunk of the population is employed by the fossil fuel industry. For example, his Utah district includes the mountains near Salt Lake City, which inspired him to be an environmentalist. But it also crosses into Carbon County, where many work in the coal industry.

"When we demonize them, they become defensive," Curtis said of the people in his district.

He said one of his main missions in Washington is to get more Republicans talking about climate change. His selling point is that there is a lot of money to be made on climate solutions — including building more efficient batteries, better wind turbines and solar panels.

"I like to tease my Republican colleagues: ‘Look, if you don’t like climate, you’ve got to go with us on this one just because there is money to be made,’" he said. "The U.S. has to do it, or we’ll be stuck buying somebody else’s technology and not using ours."