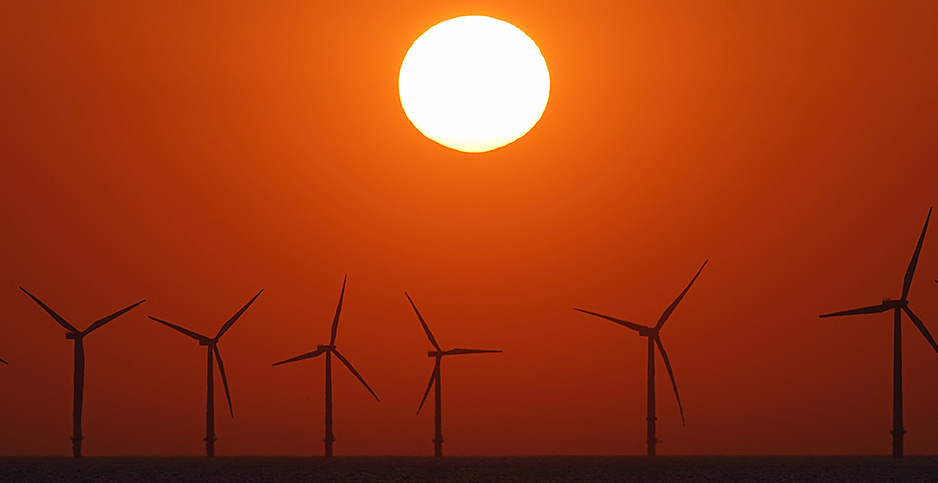 The sun sets behind the wind turbines of the Burbo Bank offshore wind farm in the Irish Sea in this 2018 file photo. Christopher Furlong/Getty Images

Offshore wind offers President Biden one of his best opportunities to marry his climate and jobs agendas. It comes as his administration approved the nation’s first major wind project off the East Coast.

The president often touts the promise of jobs within his climate plan, arguing that massive investments in renewable energy and grid infrastructure will increase employment for blue-collar Americans.

The only problem: Renewables and organized labor are not traditional allies.

Just 4% of U.S. solar workers were unionized at the end of 2019, according to a joint report by the National Association of State Energy Officials and the Energy Futures Initiative. For wind energy, 6% of the workforce was unionized. Those numbers are about half as large as the proportion of union workers at natural gas plants (11%) and coal plants (10%).

The promise of the industry was on display yesterday, as administration officials joined union leaders in announcing the approval of Vineyard Wind, the country’s first commercial offshore wind project.

Interior Secretary Deb Haaland called the decision a "significant milestone in our efforts to build a clean and more equitable energy future while addressing the climate emergency."

"As President Biden said during his joint address to Congress, when we think about climate change, we need to think about jobs," she said.

Vineyard Wind is a 62-turbine project about 12 miles off Martha’s Vineyard in Massachusetts. It would be capable of producing enough electricity to power 400,000 homes starting in 2023. A 2017 University of Massachusetts, Dartmouth, study cited by federal regulators estimated the project would create around 3,600 jobs, with roughly 1,400 coming in the construction phase and 2,000 in operations and maintenance.

Union leaders said they had signed off on a project labor agreement with the developer Monday. Details of the agreement were not provided.

"Our experience onshore has not been great," he said.

Yet Biden has proven he is more than just talk, McGarvey added.

"President Biden, Vice President [Kamala] Harris made it their business across the campaign trail and since they’ve taken office through the transition to hammer home the point that there is going to be a just transition, that people are going to be able to have middle class-sustaining occupations in the new renewable industries that are coming on board rapidly in the United States," he said. "And here we are, the first permit being issued for commercial applications and the building trades having a project labor agreement signed with the developer."

But if there is hope about the economic benefits of offshore wind, there are also limitations. Fishermen, another blue-collar constituency, blasted the decision yesterday and argued the new turbines would foul their nets and sink their livelihoods.

Manufacturing jobs for turbines and other parts could also take time to establish in the U.S. For Vineyard Wind, many of the parts and components will be manufactured in Europe and shipped to the United States.

There are also no U.S.-flagged installation vessels that meet the requirements of the Jones Act, the federal law requiring American-flagged vessels to transport goods between U.S. ports. The first American-made installation vessel, or jack-up boat, is under construction but is not expected to be in service by the time Vineyard Wind begins installing turbines in 2022 and 2023.

Such limitations are part of the reason a 2017 study cited by federal regulators in their analysis of Vineyard Wind found that just 55% of the jobs associated with the project are likely to be sourced from the U.S.

Vineyard Wind CEO Lars Pedersen said he is hopeful that more of the work can be done in the U.S. The company, a partnership of Avangrid Inc. and Copenhagen Infrastructure Partners, plans on assembling turbines in New Bedford, Mass. An operations and maintenance facility is also being planned for Vineyard Haven on Martha’s Vineyard.

"I think the wider industry push and a very detailed approach with the building trades have allowed us to identify more roles and the training requirements faster than, frankly, I had hoped for, especially on the offshore side," Pedersen said.

In other words, the marriage of offshore wind and labor has promise, but it figures to be tested by the realities of building massive infrastructure projects.