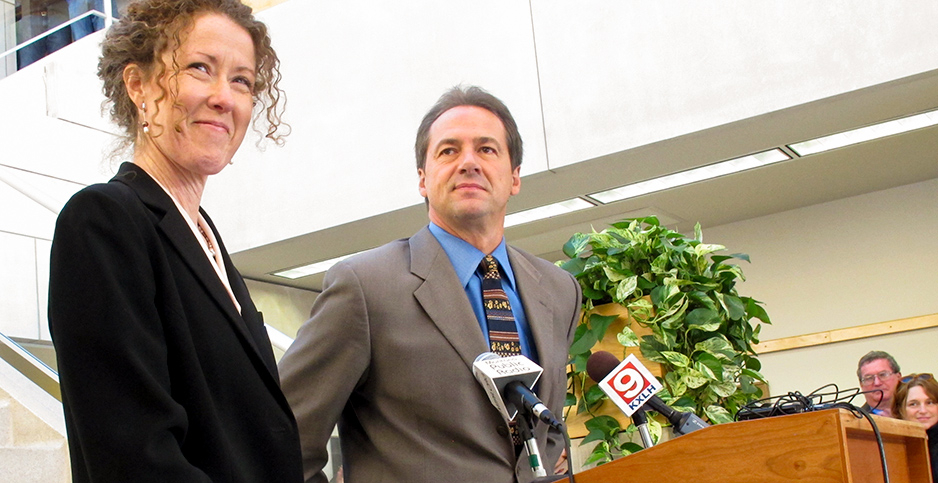 Tracy Stone-Manning, President Biden’s nominee to lead the Bureau of Land Management, has long been an advocate for conservation both inside and outside government but is willing to listen to all stakeholders on contentious issues like oil and gas development and wildlife protections, say those who have worked with her.

And like Interior Secretary Deb Haaland, who last month became the first Native American to lead the Interior Department, Stone-Manning’s confirmation would be historic. She would become only the second woman to lead BLM in its 75-year history, joining Kathleen Clarke, who served as director from 2000-2006 in the George W. Bush administration.

But supporters and critics alike note that Stone-Manning would be joining the Biden administration to swiftly implement policies advancing conservation, combating climate change, and reversing Trump-era policies that favored oil and gas development and mining activity on public lands. Both her past work and ongoing Republican complaints about policies already underway at Interior could mean she will face a difficult confirmation process, as Haaland did (E&E Daily, April 23).

Stone-Manning, who lives in Missoula, Mont., has a lengthy history working on public lands issues, particularly in her home state, where she served as former Democratic Gov. Steve Bullock’s chief of staff until joining the National Wildlife Federation in 2017. Before that, she served as director of the Montana Department of Environmental Quality in the Bullock administration, and earlier as a senior adviser to Sen. Jon Tester (D-Mont.).

"I think she’ll be great," Bullock told E&E News in an interview.

Bullock said Stone-Manning is just what BLM needs "at what I think is a real critical time for the agency," as it shifts priorities to climate change and conservation after four years pushing Trump’s "energy dominance" campaign.

"One of the things I was so impressed about with her as my chief of staff, and at DEQ, is the way that she does things," he said. "I mean she listens, she’s kind, she gets the facts, she’s fair, and then she’s decisive."

For now, Stone-Manning is the NWF’s associate vice president for public lands. BLM has no plans to place Stone-Manning into a position at the bureau while she awaits Senate confirmation.

Stone-Manning would be the bureau’s first Senate-confirmed director since Neil Kornze resigned at the conclusion of President Obama’s second term in January 2017.

Trump did not have a Senate-confirmed BLM director during his four years in office.

BLM manages 245 million acres located mostly in the West and Alaska that include critical wildlife habitat, while generating billions of dollars of annual revenue from energy development, grazing, outdoor recreation and other activities.

"I firmly believe this Department is in dire need of strong leadership," Bob Abbey, who served as BLM director during former President Obama’s first term, told E&E News. "The sooner presidential nominees are vetted and confirmed for these key bureau leadership positions, the better for all."

Stone-Manning has the support of sporting groups, which generally hold the National Wildlife Federation in high regard. Some BLM observers noted a blind spot in Biden’s Interior leadership was a perceived lack of input from hunters and anglers.

These groups hope Stone-Manning will elevate the profile of hunting, fishing and big-game conservation issues at the White House, as they once believed President Trump’s son, Donald Trump Jr., would do. Many soured on Trump-era policies advancing energy and mining development, particularly under Trump’s first Interior secretary, former Montanan Rep. Ryan Zinke.

"Tracy will be an amazing BLM director," said Land Tawney, president and CEO of Missoula, Mont.-based Backcountry Hunters and Anglers. "Her work experience in conservation and politics bodes well, and an added bonus is that she has hunted, fished and hiked for decades on the very lands she will be in charge of overseeing."

"Her understanding of issues facing our public lands will be critical as we prioritize conservation and access for hunting, fishing, and outdoor recreation," Fosburgh told E&E News.

‘Tracy is an unknown’

But the oil and gas industry remains concerned. The Biden administration has implemented a temporary halt on new oil and gas leasing on federal lands and waters. And Interior announced this week it will not hold any lease sales until at least midsummer (Energywire, April 22).

"The particular person to be the BLM director was always going to be someone to carry out the anti-federal-oil-and-gas agenda from the White House," said Kathleen Sgamma, president of Denver-based Western Energy Alliance, an oil and gas industry trade group.

Alan Olson, executive director of the Montana Petroleum Association, said he has known and worked with Stone-Manning for more than eight years, including when both served on Bullock’s climate task force.

"Tracy’s the kind of person we can go down and have a beer and have a good visit, but that doesn’t mean we agree on things," Olson said. "We definitely come from different places regarding resource development."

But Olson is also realistic about the future prospects for the oil and gas industry under the Biden administration.

"I see what’s coming down from the Biden administration — comments made by President Biden, comments made by Secretary Haaland — and it leaves me with a lot to be concerned about," Olson said.

"Tracy won’t be there to make the decisions," he added. "They’ll be made by the president and secretary."

Others say they’ve never worked with her, and they consider her a bit of a mystery. These observers, both inside Interior and out, concede they are not sure what to expect from Stone-Manning if she’s confirmed as BLM director.

"Tracy is an unknown," said one former senior Interior official involved in the Biden transition, who asked to remain anonymous.

Ed Shepard, president of the Public Lands Foundation, a BLM retirees group that closely monitors the bureau’s leadership, said he did not know enough about Stone-Manning to comment on her qualifications.

"I will say that I’m glad that a director has been nominated," Shepard said. "It’s been over four years since the BLM has had a Senate-confirmed director, as required by law."

Stone-Manning is only the second nominee for BLM director dating back nearly eight years, when President Obama tapped Kornze in November 2013. The Senate confirmed him in April 2014.

While Trump did nominate conservative lawyer William Perry Pendley for the director’s position last June, he withdrew it after strong objections to Pendley’s record of litigation against Interior, as well as past comments supporting the sale of federal lands (E&E News PM, Sept. 8, 2020).

Meanwhile, Nada Culver, BLM’s deputy director of policy and programs, will continue performing the delegated duties of director. Culver is expected to remain in the deputy director’s post if Stone-Manning is confirmed, helping to reshape the bureau after four years of significant change orchestrated by the Trump administration.

Stone-Manning will have a lot to tackle at BLM if confirmed.

Culver outlined many of the main issues during an all-staff meeting with BLM employees last week (Greenwire, April 14).

Some immediate priorities include ramping up permitting of wind, solar and geothermal power projects on federal lands as a key strategy to reduce greenhouse gas emissions.

Another priority will be addressing the management of greater sage grouse, the vulnerable Western bird.

If past is prologue, Stone-Manning’s public comments on many of these issues give insight into how she might act.

Stone-Manning was a strong critic of the Trump administration’s attempt to rewrite the Obama-era conservation plans for sage grouse and joined other conservation groups in ripping policies allowing more oil and gas leasing in sensitive grouse habitat.

The National Wildlife Federation, along with the National Audubon Society and Wilderness Society, was involved in a lawsuit in the U.S. District Court for the District of Montana challenging BLM leasing within sage grouse habitat (Greenwire, April 30, 2018).

Stone-Manning also criticized the Trump-era decision to move BLM’s Washington-based headquarters to Grand Junction, Colo., and hundreds of other positions to state offices across the West.

More than 87% of the 328 reassigned employees left the bureau, and Interior is evaluating whether to move the headquarters back to Washington.

Shortly after the relocation decision was announced in July 2019, Stone-Manning labeled it "an expensive and unnecessary relocation" that "is as irresponsible as it is ill-advised" (E&E News PM, July 16, 2019).

She wasn’t shy about criticizing Trump, either.

"It’s hard to quantify the Trump administration’s legacy on public lands because they spent four years laser-focused on opening the floodgates for oil and gas, while gutting environmental protections," she said earlier this year (E&E News PM, Jan. 19).

She was particularly vocal about Pendley and his controversial tenure atop the bureau, calling him "simply unqualified to lead the BLM" (E&E News PM, April 3, 2020).

In blasting Pendley, she also gave her opinion on the kind of leader BLM needs to function properly.

"The administration needs to appoint a permanent director who shares the values of and mission of the agency and American people," she said, "not someone who has corporate conflicts and is fundamentally opposed to the concept of public lands."