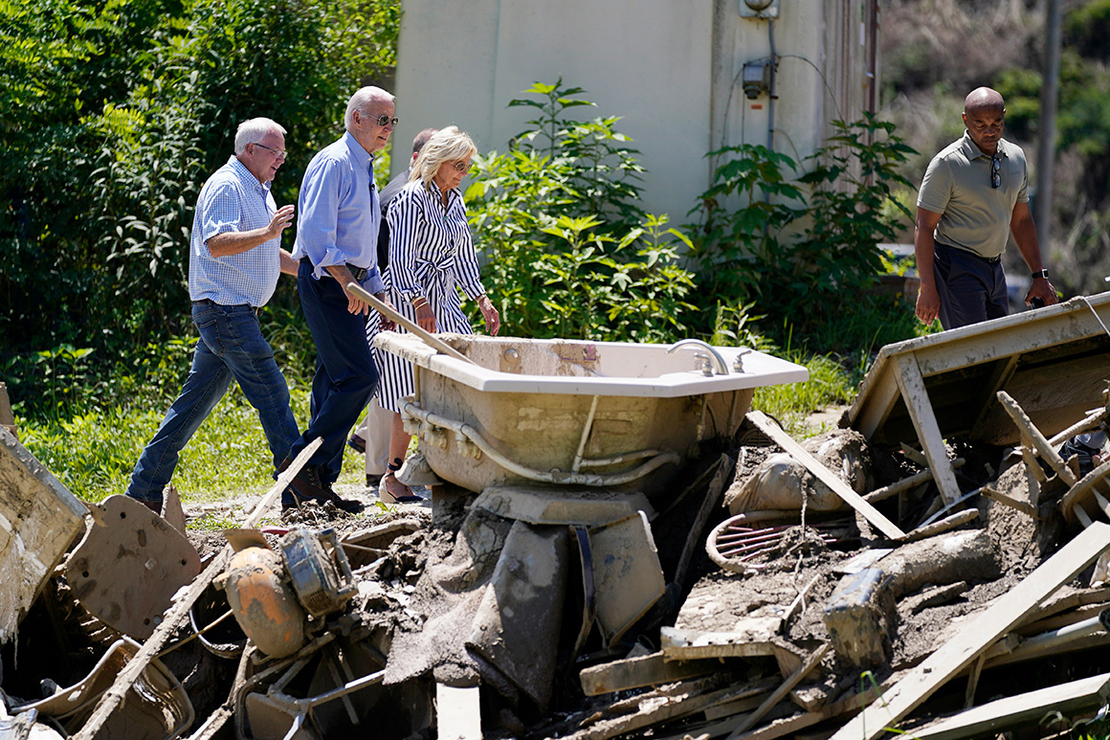 It’s the type of trip he has made more than dozen times since he was elected president, but this visit was different, as Biden is on the verge of closing the deal on a climate plan to get at the root cause of more natural disasters, such as intensifying rainfall that causes inland flooding.

Through administrative actions as well as with the help of Congress, Biden has devoted tens of billions of dollars to climate mitigation and adaptation. But the $369 billion in climate and energy security funding packaged in the “Inflation Reduction Act,” which the Senate passed Sunday, would help the United States make its most rapid shift away from fossil fuels.

In Lost Creek, where floodwaters shredded parts of town into a pile of mobile homes, trees and cars, Biden said the climate measure would allow the United States to hope for a better future with lesser climate impacts.

“Everybody has an obligation to help,” Biden said, standing in front of a devastated mobile home with red X’s drawn over the windows. “We have the capacity to do this. It’s not like it’s beyond our control. The weather may be out of our control for now, but it’s not beyond our control.”

At least 37 people have died in the flood, Kentucky Gov. Andy Beshear (D) said at the event. Some houses were gone without a trace. Dozens of roads and bridges have been damaged or destroyed. A man used a jet ski to save the lives of 10 of his neighbors.

“This is the most devastating and deadly flooding event certainly in my lifetime, unlike anything we’ve ever seen,” Beshear said.

The Senate voted along party lines to approve the “Inflation Reduction Act” on Sunday. It’s expected to be approved by the House later this week and will likely be signed into law by Biden early next week.

That’s a dramatic turnaround from just a few weeks ago, when Biden was facing a Supreme Court decision that essentially punted the ability to regulate power plant emissions to Congress at the same time that climate negotiations between Sen. Joe Manchin (D-W.Va.) and Senate Majority Leader Chuck Schumer (D-N.Y.) had ground to a halt. That failure would have seen Biden spend another summer traveling to the communities destroyed by wildfires, hurricanes and flooding without much to offer in terms of major climate policy.

Biden connected the flooding in Kentucky to his tours of wildfires disasters and burned-out forests.

“As you all know,” he said, “we’ve suffered a consequence of climate change: a significant number of other catastrophes around the nation.”

The next challenge in climate policy will be to get states to better plan and prepare for disasters.

Despite Kentucky’s vulnerability to flooding and other effects of climate change, the state and its flood-prone areas have not been aggressive about seeking federal mitigation grants.

When the Federal Emergency Management Agency last week announced the recipients of $1.2 billion in grants to protect against climate change and disasters, Kentucky received only $4.4 million. More than $4 million is going to protect flood-prone properties in Oldham County, near Louisville, which is the richest county in the state.

By contrast, Utah, which has a smaller population than Kentucky, is receiving $128 million.

Kentucky submitted only six applications to FEMA for the grants — fewer than all but five states.

Biden on Saturday decided to increase the amount of federal disaster aid Kentucky will receive to recover from the recent flooding. Biden ordered FEMA to pay 100 percent of the costs of debris removal and emergency protection in the affected counties over a 30-day span.

FEMA typically pays 75 percent of those costs and requires a state and its communities to pay the remaining 25 percent. But presidents can increase the federal share for catastrophic disasters.

In the aftermath of such destruction, the immediate needs of housing, food and infrastructure repair are paramount. Biden said the $1.2 trillion bipartisan infrastructure law, which he signed last November, provided $50 billion for climate resiliency and has better prepared the United States for deadly disasters such as the one in Kentucky.

The United States has a lot of funds available for climate resilience and disaster aid, said Chad Berginnis, executive director of the Association of State Floodplain Managers.

Between the infrastructure bill, the “Inflation Reduction Act” and Covid-19 relief funds that included disaster aid, the funding to fix communities hurt by natural disasters is at one of its highest levels ever, he said.

“We’re at unprecedented levels in terms of resources and funding. At the same time, we’re at a time of unprecedented risk,” he said.

Berginnis said what is now needed is a better understanding of future hazards and future funding. The next step is for Congress or the Biden administration to include money for scientific research and better mapping of areas that will increasingly face flooding and wildfire risk in a warming world, he said.

“We need to invest as much in the science as we do the mitigating actions,” he said. “When it comes to hazards, to what we’re protecting against, we have to have really good information.”

The biggest source of climate adaptation funding in the “Inflation Reduction Act” is the $4 billion in drought relief that would be provided for the Colorado River and its dwindling reservoirs, said Rob Moore, director of the water and climate team at the Natural Resources Defense Council.

That’s the kind of specific targeted money that will be needed to recognize the unique challenge that climate change presents in different regions, he said. It’s also a next logical step for both Congress and the administration, ensuring that infrastructure and homes are built for a warmer world, he said.

“We’re really in the earliest stages of getting the nation prepared for the impacts of climate change that are here today and that are going to grow far into the future,” he said.