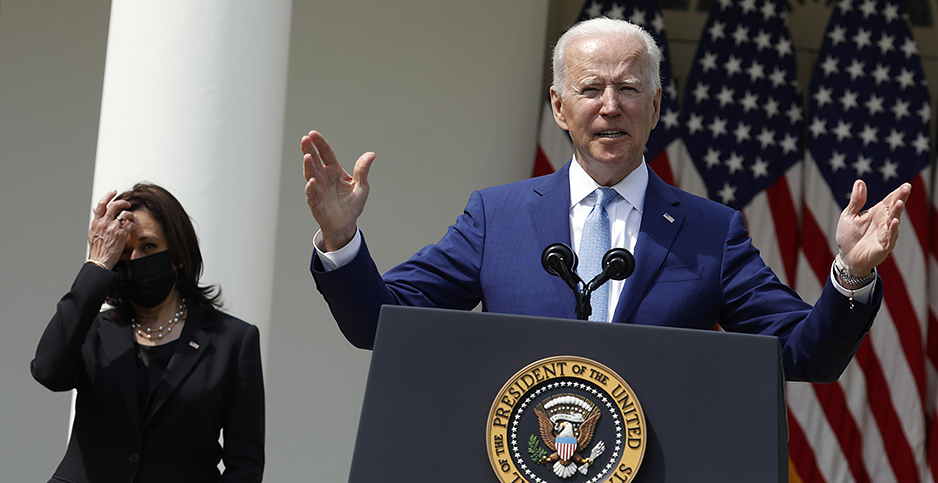 President Biden with Vice President Kamala Harris during an event at the White House yesterday. Yuri Gripas/POOL via CNP/InStar/Cover Images/Newscom

President Biden today offered a first look at his fiscal 2022 budget, which marks a sharp break from the Trump era, with major new spending for fighting climate change and promoting clean energy.

The White House this morning released a $1.52 trillion discretionary spending plan for fiscal 2022, which would be a $118 billion — 8.8% — increase over current funding.

More specifically, it would increase nondefense discretionary funding by 16% to $769 billion, while providing only a small boost of 1% for defense programs to $753 billion.

EPA would be among the biggest winners, with its funding proposed to increase by $2 billion — 21% — to $11 billion (see related story).

The document does not provide top-line spending for many smaller agencies and bureaus, including most land management agencies or the Bureau of Ocean Energy Management.

In a letter sent to Congress, along with the 58-page budget overview, the White House said it’s "reversing the trend" in recent years that saw defense spending rise while other domestic funding was stagnant or cut.

The new administration blamed "overly restrictive budget caps" on domestic underinvestment. There are no more budget caps currently in place.

"Instead of investing in climate science and technology at the Environmental Protection Agency, we’ve cut funding by 27 percent since fiscal 2010, adjusted for inflation," the White House said.

"The president believes now is the time to start reversing that trend," acting Office of Management and Budget Director Shalanda Young wrote in a letter to lawmakers.

OMB only offered the broadest details of its funding goals today, saying the usual voluminous budget presentation will come "later this spring."

The presentation today does not contain any details on tax and revenue plans for fiscal 2022, nor does it explain how the request fits in with Biden’s recent proposal for $2.2 trillion in infrastructure spending.

An OMB official stressed the fiscal 2022 budget remains a work in progress as the new administration gets key officials in place.

But the official said that with top-line figures offered, Congress now can at least begin budget hearings and drafting fiscal 2022 spending bills.

According to the budget summary, climate spending would increase by $14 billion across nearly all federal agencies in fiscal 2022 (see related story).

It stressed those dollars would put the United States on a path to achieve net-zero greenhouse gas emissions by 2050 and 40% of the benefits would focus on disadvantaged communities.

"Climate change is one of the greatest challenges of our time. Yet it is also an opportunity to create new industries and good paying jobs that provide the chance to join a union, revitalize America’s energy communities and the economy, and position America as the world’s clean energy superpower," the budget summary states.

Biden’s plan is sweeping and seeks an assortment of new spending to meet climate goals, including:

Biden’s early move to have the United States reenter the Paris climate accord is reflected in foreign aid spending.

The budget calls for the United States to make its first payment, $1.2 billion, to the United National Green Climate Fund since 2017. It also contains more than $450 million for other multilateral climate initiatives.

The budget plan would "set the stage" for Biden’s green-friendly infrastructure push, with large increases in rail, highway and public transit spending.

It also includes $1.7 billion in energy savings retrofits for schools, homes and federal buildings, as well as $600 million to federal agencies for buying new electric vehicles and charging infrastructure.

"Elections have consequences," said Matthew Davis, the legislative director for the League of Conservation Voters.

"We are encouraged to see the Biden-Harris administration put their money where their mouth is and reaffirm an all-of-government commitment with $14 billion for climate action and justice for communities most impacted by toxic pollution and the impacts of the climate crisis in their budget blueprint."

The Pentagon’s budget would rise to $715 billion, an $11 billion, or 1.6%, increase over current spending. The document offers few details of how those dollars would be doled out, although it notes making military installations climate-resilient is a priority.

Perhaps most significantly, Biden would end DOD’s Overseas Contingency Operations account, which has been used for the past few decades to cover the cost of overseas conflicts with emergency funds.

Critics have called for scrapping the multibillion-dollar OCO fund for years, arguing it’s become a backdoor way to boost DOD’s base budget as the wars in Iraq and Afghanistan have wound down.

Republicans are certain to seek an increase to defense accounts and are likely to press for maintaining OCO spending.

The GOP is also likely to criticize Biden for a plan to give Homeland Security $52 billion, a $100 million, or 0.2%, increase.

The budget plan would cancel past border wall funding and provide no new money for building the barrier along the U.S.-Mexico boundary — a move likely to be cheered by conservation groups that have fretted over its impacts on habitat and species.