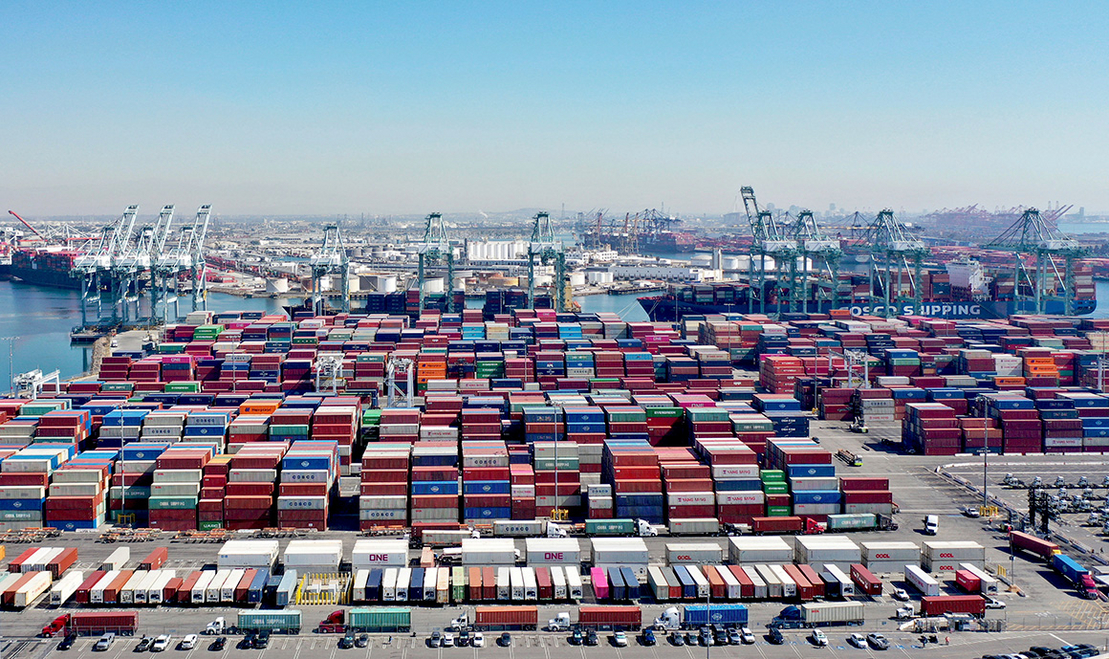 The Port of Los Angeles with containers, ships and trucks is shown on Wednesday afternoon. President Biden announced a deal to expand operations at the Port of Los Angeles in hopes of ending the logjam of ships waiting to unload, but public health advocates are concerned about impacts of the added air pollution on the local community. Dean Musgrove/The Orange County Register via AP

President Biden’s support this week for keeping the Port of Los Angeles open 24/7 to boost the country’s supply chain has infuriated public health advocates and left many questioning his promises on environmental justice.

The port, the country’s largest, is also the biggest source of air pollution in Southern California when emissions from all of its activities — ships, trains, trucks and other vehicles — are taken into account.

Along with its neighbor, the Port of Long Beach, the area has been an environmental justice battleground for decades. Physicians dubbed it a "diesel death zone," and front-line neighborhoods are largely communities of color who say the health impacts of the poor air quality have been severe.

He then addressed Biden’s stated commitment to fight for environmental justice: "I’m not going to say it contradicts it," said Golden, who has been fighting the ports for nearly 20 years. "It throws it out the window.”

Biden on Wednesday announced support for opening the Port of Los Angeles around the clock, following steps taken by the Port of Long Beach weeks ago.

The effort seeks to address COVID-19-related supply chain shortages. The ports receive roughly 40 percent of shipping containers imported to the U.S., holding everything from televisions to toilet paper. Biden also said Wal-Mart, UPS and FedEx will increase their efforts.

"By staying open 7 days a week, through the night and on the weekends the Port of Los Angeles will [be] open over 60 extra hours a week," Biden said at a White House event. "In total, that will almost double the number of hours that the port is open for business from earlier this year."

Biden did not mention any environmental impacts of the expanded operations, and the White House did not respond to questions in time for publication.

Regulators say that shifting to 24/7 operations will boost emissions of nitrogen oxide, or NOx, a component of ozone, and diesel particulate matter, a pollutant associated with many respiratory and other health problems.

State officials recently found that there has already been an uptick in NOx emissions due to port congestion and the many ships waiting outside the port to dock and unload.

An estimate by the California Air Resources Board earlier this year concluded NOx emissions have risen about 14.5 tons per day, an increase of roughly 40 percent above 2019 levels. Most of the increase was caused by additional ships at anchor and more trucking activity, said Nahal Mogharabi, a spokesperson for the South Coast Air Quality Management District (AQMD), the local regulatory agency.

"South Coast AQMD is concerned about emissions from the ports," she said in an email. "The Basin has the worst ozone in the nation and the ports are the largest source of emissions. Further, the disadvantaged communities near the ports continue to experience higher air toxics cancer risks due to port pollution."

Opening the ports 24/7 is "basically that we are going to get these cheap goods and everything that will comes through these ports at the expense of the people there," said Dr. Afif El-Hasan, an Orange County pediatrician and volunteer with the American Lung Association.

"It makes me want to pull my hair out," he said.

The Port of Los Angeles is frequently touted as an economic engine.

About 125,000 companies import through the port, Executive Director Gene Seroka said on a call with reporters yesterday, and 75,000 companies export out of it.

More than 100 trains that are miles long leave the complex daily, and some 18,000 trucks drivers are registered to haul away from the port.

"This is the most complex infrastructure project in the world," Seroka said.

The port has taken steps to address air emissions, including clean air action plans and seeking to fully implement a Clean Trucks Program to cut down on diesel PM and other emissions.

"That conversation with community … NGOs and environmental groups is ongoing every day here at the port," Seroka said.

Some of the port’s efforts have worked — up to a point. NOx emissions have been cut since a peak in 2006, according to South Coast AQMD data, but they have since largely leveled off.

The two ports "have a history of reducing emissions through implementation of their Clean Air Action Plans," Mogharabi said, "however progress has stalled over the past decade, right when emission reductions have needed to accelerate."

Advocates have criticized that trend.

"Over the last four years or so, the ports have been coasting on environmental success they had a decade and a half ago," said Adrian Martinez, an attorney with Earthjustice.

Mogharabi said in the near term, air pollution conditions may improve due to prevailing weather and wind conditions and reducing emissions from ships anchored offshore with their engines running.

"However," she added, "in the long-term South Coast AQMD believes the 24-hour operation will result in increased throughput/emissions potentially offsetting the nighttime and lower congestion benefits."

El-Hasan said the air pollution impacts could be more significant than that. Many goods that come in through the ports are shuttled to Southern California’s warehouse and logistics hub in San Bernardino County, east of Los Angeles. That area has some of the worst air quality in the country and is also home to environmental justice concerns.

"You’re getting a double whammy from this," El-Hasan said.

Biden has vowed to make environmental justice a priority in his administration, and Vice President Kamala Harris is a longtime leader on the issue.

Biden signed executive orders requiring a governmentwide review of policies and practices that lead to injustices for low-income and minority communities. He also sought to funnel more money to those communities through climate and other proposed programs.

But several questioned whether the administration put economic — and political — considerations above the environment and public health with the port announcement. Biden’s approval rating has declined since mid-August, which some analysts have attributed to higher inflation and declining consumer confidence levels, both of which appear related to Biden’s Port of Los Angeles announcement this week.

"There was no acknowledgment for anything except the economy," El-Hasan said.

Golden, the advocate in Long Beach, said he could only hope the decision was rushed and not fully vetted.

"All you are doing is putting more negative pressure that will create more negative health effects on the people here," he said. "I hope it’s an oversight and something that wasn’t fully understood before they released it — that would be my hope."