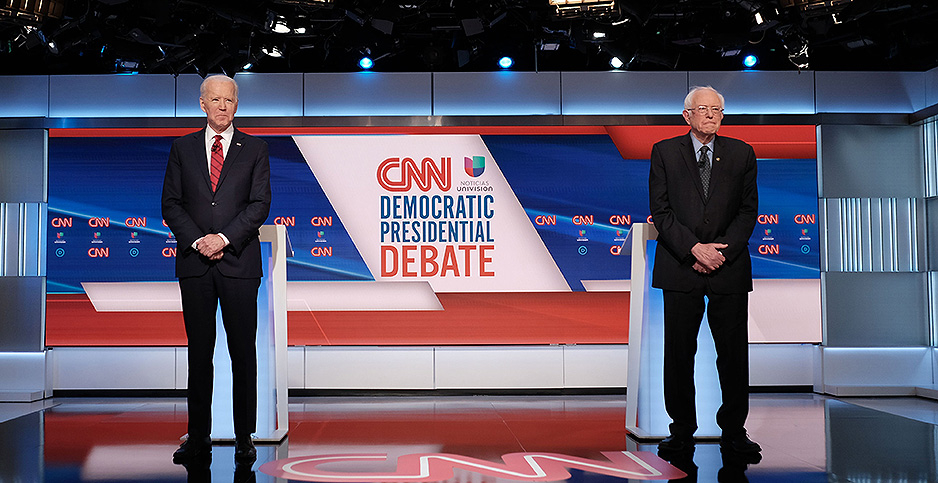 The televised debate last night in a CNN studio in Washington came before another round of Democratic primaries tomorrow in Arizona, Florida, Illinois and Ohio.

Sanders sought to frame his opponent’s plans as soft on the fossil fuel industry, while Biden presented himself as having the strongest record on the issue.

"This is an issue of enormous consequence. What Joe is saying goes nowhere near far enough," Sanders said after Biden laid out major points of his climate plan, like negotiating new greenhouse gas targets under the Paris Agreement and putting economic pressure on countries to comply.

"We are fighting for the future of this planet, for the well-being of our kids and future generations," Sanders later said. "You cannot continue, as I understand Joe believes, to continue fracking. Correct me if I’m wrong."

Biden continually returned to his experience, like overseeing implementation of the American Recovery and Reinvestment Act, writing the Global Climate Protection Act of 1986 and helping President Obama with his leading role in pushing for the Paris Agreement.

"I did that while you were watching," he told Sanders.

Biden appeared to make a new promise, responding to Sanders’ contention that he would allow fracking to continue by saying, "No more, no new fracking."

His previous platform and statements were that he would only ban fracking on federal land, while Sanders has pledged to ban it everywhere.

But Biden’s campaign walked it back last night, telling E&E News after the debate he was referring just to drilling on federal land, as he stated last year in his climate change plan.

Biden made news last night when he committed to naming a woman as his vice presidential running mate if he got the Democratic nomination.

"I commit that I will, in fact, pick a woman to be vice president," he said. "There are a number of women who are qualified to be president tomorrow."

Sanders said he would "in all likelihood" pick a woman running mate as well. Both major parties have nominated women for vice president in the past.

Yesterday’s debate was the first one-on-one contest between Biden and Sanders, who are essentially in a two-man race for the Democratic nomination. Rep. Tulsi Gabbard of Hawaii is also running but, with just two delegates, did not qualify for the debate.

It was also unique in that there was no live audience. Because of the coronavirus pandemic and recommendations against large gatherings, the Democratic National Committee decided to move the debate from Phoenix, where it would have had an audience.

The disease has wreaked havoc on economies around the world and caused varying levels of closures and forced isolation.

The new coronavirus dominated the debate, with about half of its time devoted to the outbreak and how Biden and Sanders would handle it.

Biden reiterated the multipoint plan he released last week on the issue, including boosting hospital capacity and ensuring that no one would have to pay for testing or treatment. He used it as an opportunity to highlight his experience with diplomacy.

"We have to lead the world. We should be the ones doing what we did during the Ebola crisis, bringing the whole world together and saying, ‘This is what we must do.’ We have to have a common plan," he said.

Sanders used it to promote his "Medicare for All" plan, arguing that the country would be better able to handle pandemics under such a system.

"We are the only major country on Earth which does not guarantee health care to all people. We are spending so much money, and yet, we are not even prepared for this pandemic. How come we don’t have enough doctors? How come hospitals in rural areas are shutting down? How come people can’t afford to get the prescription drugs they need?" he asked.

He also used it as an opportunity to criticize calls from President Trump and some others to help out the oil industry, which has suffered in recent weeks from price pressures stemming from coronavirus fears and a price war between Russia and Saudi Arabia.

"We can’t repeat what we did in 2008. Joe voted for that. I voted against it," Sanders said of the Emergency Economic Stabilization Act of 2008, which sought to inject capital into struggling banks. "Because we have got to do more than save the banks or the oil companies."

The outbreak has also dramatically changed how the candidates are campaigning. Both have stopped holding public rallies in favor of digital town hall events.

Arizona, Florida, Illinois and Ohio will offer 577 delegates, a big portion of the 1,991 delegates a candidate would need to clinch the Democratic presidential nomination.

Top election officials in those four states released a joint statement Friday defending their decisions and saying they would prioritize voters’ health and safety.

"Americans have participated in elections during challenging times in the past, and based on the best information we have from public health officials, we are confident that voters in our states can safely and securely cast their ballots in this election, and that otherwise healthy poll workers can and should carry out their patriotic duties on Tuesday," they said.

So far, leaders in Georgia and Louisiana have moved their planned primaries. Georgia moved its event from March 24 to May 19, and Louisiana’s moved from April 4 to June 20.