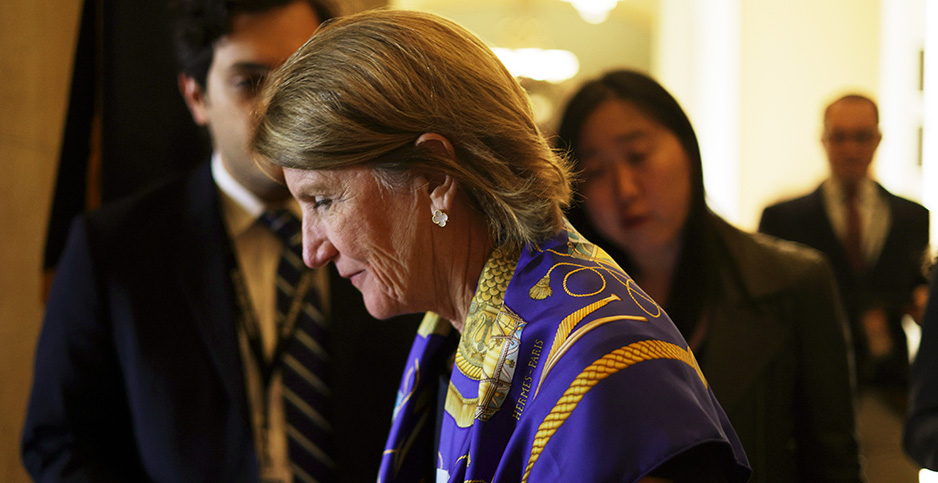 Democrats and the White House are turning to an alternate group of senators crafting their own infrastructure proposal after bipartisan talks between President Biden and Sen. Shelley Moore Capito (R-W.Va.) fizzled out yesterday.

The breakdown between Biden and Capito came after nearly two months of discussion and the exchange of a few counteroffers, but the two sides failed to close the gap on the scope of a package, the overall cost and how to pay for the plan.

The White House is now pursuing talks with a bipartisan group of lawmakers known as the "G-20," but top Democrats signaled yesterday that they’re prepared to go it alone should the GOP remain unwilling to come around on key priorities, including climate.

In a statement after a phone call with the president, Capito said she was "disappointed" that Biden had chosen to pull the plug on negotiations.

"Despite the progress we made in our negotiations, the president continued to respond with offers that included tax increases as his pay for, instead of several practical options that would have not been harmful to individuals, families, and small businesses," she said in a statement.

"While I appreciate President Biden’s willingness to devote so much time and effort to these negotiations, he ultimately chose not to accept the very robust and targeted infrastructure package, and instead, end our discussions."

In a statement, White House press secretary Jen Psaki said that Biden had informed Capito that her latest offer "did not, in his view, meet the essential needs of our country to restore our roads and bridges, prepare us for our clean energy future, and create jobs."

"He offered his gratitude to her for her efforts and good faith conversations, but expressed his disappointment that, while he was willing to reduce his plan by more than $1 trillion, the Republican group had increased their proposed new investments by only $150 billion."

Psaki said that Biden had spoken with Sens. Kyrsten Sinema (D-Ariz.), Joe Manchin (D-W.Va.) and Bill Cassidy (R-La.) — all of whom have emphasized the need for bipartisanship in assembling an infrastructure package.

"He urged them to continue their work with other Democrats and Republicans to develop a bipartisan proposal that he hopes will be more responsive to the country’s pressing infrastructure needs," Psaki said.

Biden also spoke to House Speaker Nancy Pelosi (D-Calif.) about moving forward with an infrastructure package this month, as well as Senate Majority Leader Chuck Schumer (D-N.Y.), with whom the president spoke about the need to get started on the budget resolution.

"The president is committed to moving his economic legislation through Congress this summer, and is pursuing multiple paths to get this done," Psaki said.

Her comments on the budget resolution were the latest sign that the White House and congressional Democrats will move ahead on Biden’s infrastructure plan without GOP support if needed.

The next budget resolution is expected to contain instructions allowing the package to pass the Senate by a simple majority under budget reconciliation, which allows certain bills to bypass the 60 votes needed under normal rules to skip a filibuster.

Senate Budget Chairman Bernie Sanders (I-Vt.) said he’s hoping to move to reconciliation "as soon as possible" and to use it to pass both Biden’s family plan and the president’s infrastructure and climate proposal.

"The president’s job is he’s given us a broad outline. Our job is to take that outline and move with it to deal with the issue," Sanders told reporters. "I happen to think more money should go into climate, maybe less money elsewhere, but it’s a good start."

Schumer signaled yesterday that Democrats could pursue infrastructure on two paths. "It may well be that part of the bill that will pass will be bipartisan, and part of it will be through reconciliation," Schumer told reporters.

"But we’re not going to sacrifice the bigness and boldness in this bill. We will just pursue two paths. And at some point, they will join."

It remains to be seen how the traditional bipartisan surface transportation bill — which passed unanimously through the Senate Environment and Public Works Committee — fits into the equation.

The House is set to mark up its own surface transportation measure today, along with a water infrastructure bill. Both are opposed by the GOP (E&E Daily, June 7).

‘Waiting in the wings’

Members of the G-20 group were set to meet last night, but they offered few details yesterday about how far they would be willing to go to meet Biden, who initially proposed to spend more than $2.2 trillion on an infrastructure bill.

Sen. Mitt Romney (R-Utah) said the lawmakers are still "nailing down exactly where we are." "We’ve been, at this stage, waiting in the wings if there’s interest in our proposal," Romney told reporters.

But Romney and Cassidy both explicitly shot down the idea of using a carbon tax to pay for the plan. "In our proposal, we don’t have a carbon tax," Romney said.

Cassidy, meanwhile, said he would continue to advocate for more funding for coastal resilience in any final package.

"If you look at Port Fourchon, which is the port that supplies all the offshore energy production, and you look at it 30 years ago, with all the land all around it — you look at it 10 years ago? It’s an island, there’s been that much coastal erosion … the more exposed, the more vulnerable our ability to support energy infrastructure is."

Cassidy later tweeted that he had spoken to Biden on the phone about infrastructure, writing that he had pitched the inclusion of "flood resiliency and energy provisions."

But the end of Capito’s negotiations could portend a poor outcome for the bipartisan group. Several Republicans said yesterday that Biden was unwilling to go far enough in their direction.

"The closest we ever were was the day we were in the Oval Office with the president," said Sen. John Barrasso (R-Wyo.), a member of Capito’s negotiating group, referring to a meeting at the White House last month. "He has never really moved toward us in terms of core infrastructure."

Barrasso said the six Senate Republicans walked away from that meeting thinking they were close to a deal that could get "60 or 70 votes."

"I think it’ll be very difficult for Joe Biden to get 60 votes working with this G-20, because I think what he agrees on with them is not going to get him the rest of the Democrats," Barrasso told reporters.

The talks between Biden and Capito had spurred concerns among Democrats and progressive groups that climate change had fallen by the wayside, given the GOP’s reluctance to include the issue in "core" infrastructure.

Those concerns were bubbling under the surface yesterday, even as focus turned to bipartisan talks with the G-20.

Sen. Sheldon Whitehouse (D-R.I.) said Monday that he was "anxious about climate legislation" in a tweet thread that spread among climate advocates (E&E Daily, June 8).

Whitehouse told reporters yesterday that the Biden administration was "getting there" and had reached out to him, but that the president had not mollified his concerns.

Another climate hawk — Sen. Brian Schatz (D-Hawaii) — said he has had "some pretty constructive conversations with the White House over the last couple of days."

"Only the paranoid survive in politics, and we haven’t even enacted a budget resolution yet, so there’s a long way to go," Schatz said. "I’ll just say I share Sheldon’s anxiety, but we’ve also heard relatively reassuring things from the White House."

As Schumer entered an elevator yesterday, E&E News asked whether he had a response to Whitehouse’s concerns.

"We need bold, strong climate provisions in the bill," Schumer proclaimed with a smile as the doors closed.