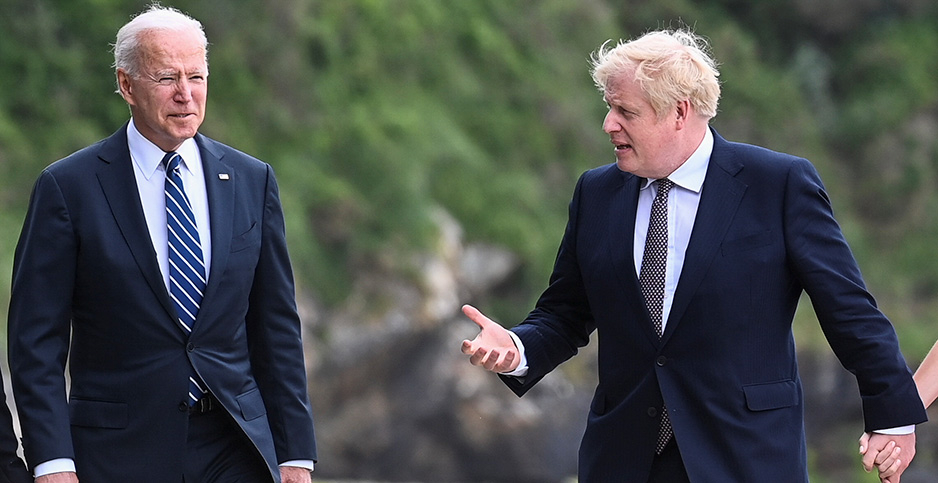 President Biden’s soaring climate agenda was stumbling as he boarded Air Force One for a high-profile trip to Europe, where the world’s pace-setting policies on emissions are waiting to be enacted.

Biden came into office aspiring to lead the globe with a clean energy revolution. But prospects for a massive overhaul to decarbonize America’s economy showed signs of splintering as he traveled to England Wednesday for the Group of Seven summit, which begins today.

His climate adviser, Gina McCarthy, suggested this week that a pillar of Biden’s climate agenda, a clean energy standard, might not pass Congress. And hundreds of billions of dollars in proposed infrastructure spending has failed so far to gain traction among American politicians.

"The real question of how ambitious is a country really, is to watch what it does and not what its leaders say," said Samantha Gross, director of the energy security and climate initiative at the Brookings Institution.

Compare that with European politics on climate.

Germany said it would cut emissions 65% by 2030 after the country’s highest court ruled that its previous target would harm future generations. The United Kingdom has set a goal of slashing carbon 78% by 2035 and has been pushing G-7 countries to end government funding for fossil fuels. The European Union is working to finalize its carbon border adjustment mechanism, sparking the U.S. to consider a similar initiative (Climatewire, April 30).

The countries that constitute the G-7 — Canada, France, Germany, Italy, Japan, the U.K. and the U.S. — are among the world’s largest historical emitters. Others are looking for them to expand earlier proposals to stop financing coal overseas, transition toward greener economies and make good on a promise to deliver $100 billion in climate finance.

For Biden, the stakes are high.

He brought the U.S. back to the negotiating table by reentering the Paris Agreement, but many countries remember how the climate policies of President Obama were so easily reversed when American voters elected President Trump, a climate denier.

"The United States does come into the G-7 in a somewhat diminished role really with high expectations," said Christy Goldfuss, senior vice president for energy and environment policy at the Center for American Progress, a liberal public policy organization.

Biden heads to Europe as talks on an infrastructure bill remain hung up in Congress and competition with China continues to loom over foreign policy. After the president broke off infrastructure talks on Tuesday with West Virginia Sen. Shelley Moore Capito, the lead Republican negotiating with the White House, Democrats stepped in to say they wouldn’t trade climate change finance for bipartisanship.

"I don’t think there’s any question in the United States or abroad, frankly, about Biden’s commitment to the climate, but this is a test of how seriously the rest of the world is going to take us," said Gross of Brookings.

More broadly, the G-7 is a test of whether the world’s richest nations can come together on climate. What’s yet unknown is whether the U.S. can meet its own goals of halving emissions by 2030 and eliminating them 20 years later.

"The test of global leadership isn’t just how much are you putting on the table; it’s how are you bringing a coalition together to actually meet the challenges of the day," said Jennifer Tollmann, a senior policy adviser focused on climate diplomacy at the think tank E3G.

"So is the Biden administration more than flash and big, bold statements?" she added. "Can they actually do the diplomatic work of making countries come together around a solution?"

The meeting takes place ahead of other major global gatherings, including a U.S.-European Union summit next week, a meeting of the Group of 20 in October hosted by Italy and climate talks under the United Nations’ Framework Convention on Climate Change in Glasgow, Scotland, in November.

"If there isn’t solidarity shown at this point by the world’s major economies on vaccines and on climate, that puts us in a really bad position, heading into a major climate conference," said Tollmann.

A call for action

In a communique last month, environment ministers agreed to phase out new financing for fossil fuels and reaffirmed an earlier commitment to deliver $100 billion a year in climate finance to help developing countries reduce their greenhouse gas emissions. Finance ministers backed that pledge in a separate meeting last week (Climatewire, May 24).

"The picture we want to see is a picture of increasing climate ambition from the world’s major economies and a commitment to continue to act to implement that," said Nathan Hultman, director of the Center for Global Sustainability at the University of Maryland.

Yet each of the G-7 leaders comes to the summit with its own domestic considerations.

The U.S. has submitted a budget that puts it well short of meeting an earlier $3 billion commitment to the U.N.’s Green Climate Fund, which provides climate aid to developing countries in the form of grants and loans.

British Prime Minister Boris Johnson has called for a "Marshall Plan" climate initiative that would support large-scale renewable energy projects across Africa and parts of Asia. But he’s also come under fire for cutting the country’s overseas development budget.

Japan, which previously balked at ending financing for overseas coal projects, has yet to show how it will transition that support toward renewable energy.

Time for a reset

Stronger plans for delivering finance where it’s most needed are a key test facing G-7 members.

The rich countries that pledged $100 billion for climate programs abroad have yet to deliver even the first tranche of that money. And that amount now appears far short of what’s needed to address current climate-related challenges.

A report released Wednesday by the International Energy Agency calls for more than $1 trillion in investment by 2030 to help lower- and middle-income countries transition their economies to clean energy (Climatewire, June 9).

Another report, commissioned by Johnson, sets an even higher target: $3 trillion a year over the next decade for sustainable infrastructure and nature-based solutions.

Saleemul Huq, director of the International Centre for Climate Change and Development in Bangladesh, called the $100 billion a "totemic" figure in terms of instilling trust in the word of world leaders.

Leaders at the G-7 summit are expected to clarify what funding, if any, will be on the table. But previous pledges risk getting in the way.

Now, the conversation needs to be about an entirely different scale of investment, said Rachel Kyte, dean of the Fletcher School at Tufts University.

What developing countries need to grow green is access to capital markets, trade rules that won’t discriminate against them, aid and technical assistance, and a multilateral development bank that pushes it all in one direction, Kyte said.

India, South Korea, South Africa and Australia have also been invited to the G-7 as observers. And although the world’s largest current emitter, China, won’t be there, it is expected to cast a shadow over negotiations.

Tollmann from E3G said the G-7 needs to set a standard for what good development and climate finance looks like, so China can sign up.

"Rather than thinking about a zero-sum game, what we really need to see is everybody stepping up," she added.

But a lot has changed since the end of 2014, when China and the U.S. came together to kick-start the Paris Agreement.

"We’re much more adversarial, and I think China is still figuring out what it wants to do, as well," said Gross from Brookings. "In some ways it wants to be a global leader, and it has been. … But on the other hand they’re still financing coal plants abroad through their Belt and Road program. Their emissions are still rising."

Kyte said there is sufficient agreement among the G-7 about what needs to be done. It’s more a question of timing and whether the countries take action together or separately.

"I think we’re at the beginning of a new era of rule setting," she said.