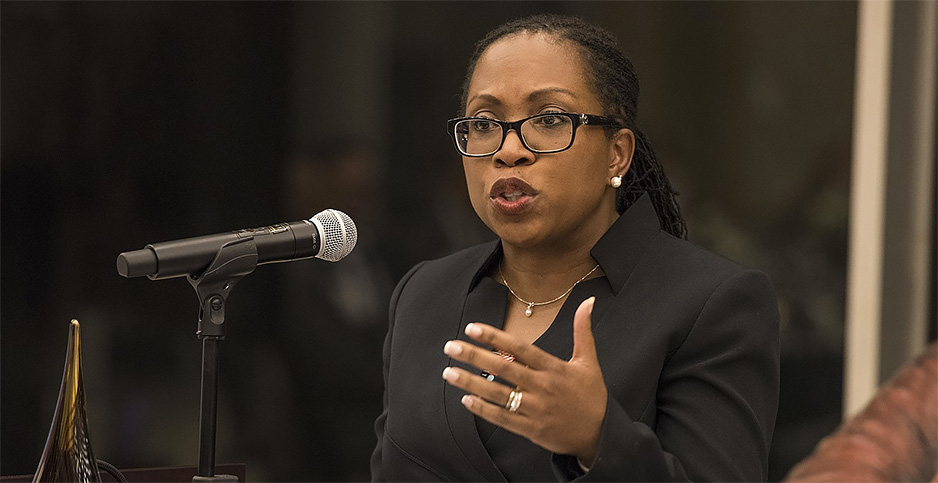 President Biden has tapped Judge Ketanji Brown Jackson to fill Merrick Garland's seat on the U.S. Court of Appeals for the District of Columbia Circuit. Jackson is pictured at a University of Chicago Law School dinner in February 2020. Lloyd DeGrane/Wikipedia

President Biden today tapped Judge Ketanji Brown Jackson to a powerful appeals court with a heavy environmental docket, putting her on track for eventual consideration for the Supreme Court.

If she is confirmed to the U.S. Court of Appeals for the District of Columbia Circuit, Jackson, 50, would bring a wealth of experience on environmental issues and a reputation as an evenhanded judge who’s not afraid to cross ideological lines.

In one 2018 opinion, for example, Jackson found the middle ground in a complex Clean Air Act case. She ruled that EPA could take until October 2021 to finish overdue reviews of air toxics standards for spandex manufacturing, carbon black production and other industries.

The deadline Jackson set ran later than environmentalists had asked for but was significantly ahead of the target date EPA had requested (Greenwire, April 4).

A seat on the D.C. Circuit would also put Jackson, who is Black, on track for a Supreme Court nomination if a seat eventually opens. Biden has said he would name a Black woman to the court if he has the opportunity to nominate a justice.

Justice Stephen Breyer, who at 82 is the court’s eldest justice, has recently faced calls from some liberal groups to step down to make way for a younger replacement.

"Given that so many justices of the Supreme Court have come from the D.C. Circuit — Chief Justice Roberts, Justice Thomas, Justice Kavanaugh (and before them, in recent times, Justice Scalia and Justice Ginsburg), Judge Jackson would then be well-positioned to be nominated for the high court should a seat open up," wrote Duke University law professor Marin Levy in an email.

Before she was a federal judge, Jackson served as vice chair of the U.S. Sentencing Commission. She was previously of counsel at the law firm Morrison & Foerster LLP and a public defender in Washington, D.C. She clerked for Breyer and two federal appeals court judges.

Jackson, a Harvard College and Harvard Law School graduate, is expected to receive bipartisan support for her nomination to the D.C. Circuit. She was confirmed to the U.S. District Court for the District of Columbia in 2013 by voice vote, a sign of strong support from both Republicans and Democrats.

"Now, our politics may differ, but my praise for Ketanji’s intellect, for her character, for her integrity, it is unequivocal," he said at the time. "She is an amazing person, and I favorably recommend your consideration."

Jackson will likely face pushback in the Senate over her strong rhetoric in decisions related to policies by former President Trump, Case Western Reserve University law professor Jonathan Adler wrote in an email. She may also bear some blowback from four years of partisan battles over Trump’s judicial nominees, he added.

As a judge for the D.C. District Court, Jackson didn’t shy away from siding with the Trump administration in some cases.

In a 2019 case over construction of a border wall between the United States and Mexico, she found that the court did not have jurisdiction to hear environmentalists’ challenge to the Trump administration’s decision to exempt itself from key environmental laws (Greenwire, Sept. 5, 2019).

Observers noted that Jackson’s close attention to the legal record presented in her cases has led her to issue rulings that swing across ideological lines.

At the start of the Trump administration, for example, she rejected an attempt by green groups to get the Interior Department to speed up a review of its National Environmental Policy Act procedures in the wake of the 2010 Deepwater Horizon disaster (Greenwire, May 5, 2017).

In a 2015 case, however, Jackson delivered a win to the Obama administration and conservation groups when she found that logging, grazing and off-highway vehicle groups didn’t have standing to challenge a 2012 Forest Service planning rule (E&E News PM, April 30, 2015).

"She gets in below the surface," said Sankar of Earthjustice.

Biden also named 10 other judicial nominees today, including the first Asian American and Pacific Islander woman to serve on the D.C. District Court.

"This trailblazing slate of nominees draws from the very best and brightest minds of the American legal profession," Biden said in a statement this morning. "Each is deeply qualified and prepared to deliver justice faithfully under our Constitution and impartially to the American people — and together they represent the broad diversity of background, experience, and perspective that makes our nation strong."

Florence Pan, Biden’s nominee to the D.C. District Court, is an associate judge on the Superior Court of the District of Columbia. She was previously an assistant U.S. attorney in D.C. and a senior adviser at the Treasury Department.

Pan is a graduate of the University of Pennsylvania and Stanford Law School.

He selected Rupa Ranga Puttagunta for the Superior Court of the District of Columbia.

The Alliance for Justice applauded Biden for naming so many nominees of color.

"We commend President Biden for nominating stellar lawyers to serve on our nation’s federal courts," said the group’s president, Nan Aron, in a statement. "Today’s nominees embody the demographic and professional diversity and forward-thinking that will ensure justice is served to the American people when they enter a courtroom."